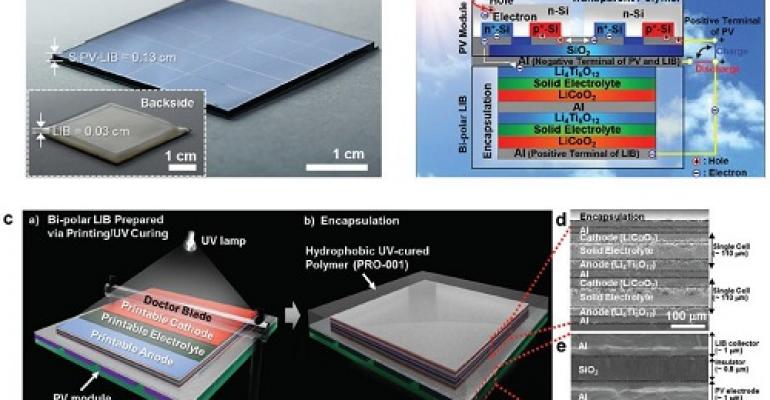 Researchers have developed a new energy-dense battery that can be recharged using light not only from the sun, but also indoor lighting.

Researchers have developed a new energy-dense battery that can be recharged using any type light, providing a portable way to charge devices and even vehicles.

A team of scientists affiliated with the Ulsan National Institute of Science and Technology (UNIST) in South Korea developed the single-unit, photo-rechargeable portable power source, which allows people to power portable electronics anywhere with access to light, either from the sun or from indoor sources, according to researchers.

The technology is based on high-efficiency silicon solar cells and lithium-ion batteries, with the team fabricating a solid-state lithium-ion battery with a bipolar cell configuration directly on the aluminum electrode of a photovoltaic module through an in-series printing process, researchers said.

The team designed the aluminum electrode to act simultaneously as the current collector of the lithium-ion battery and the electrode for the solar cells to enable the seamless architectural and electrical connection of the two different energy systems. Doing this allowed the battery to be charged without the loss of energy, according to researchers.

In tests, the battery demonstrated high photo-electrochemical performance and design compactness that are beyond what’s achievable today with conventional photovoltaics or lithium-ion batteries alone, said Professor Sang-Young Lee of the Energy and Chemical Engineering Department at UNIST. It also showed an unprecedented improvement in photo-charging capability, with the ability to charge in less than two minutes with a photo-electric conversion and storage efficiency of 7.61 percent, he said.

“This device provides a solution to fix both the energy-density problem of batteries and the energy storage concerns of solar cells,” Lee said. “More importantly, batteries have relatively high power and energy densities under direct sunlight, which demonstrates its potential application as a solar-driven infinite energy conversion/storage system for use in electric vehicles and portable electronics.”

Researchers published a paper on their research in the journal Energy and Environmental Science.

In tests, Professor Lee and the team connected the battery to a number of portable electronics to see how it would perform in real-world scenarios. They found that it could fully charge within two minutes in various light scenarios from sunlight illumination to low light, showing “great potential as a photo-rechargeable mobile power source that will play a pivotal role in the future era of ubiquitous electronics,” Lee said.