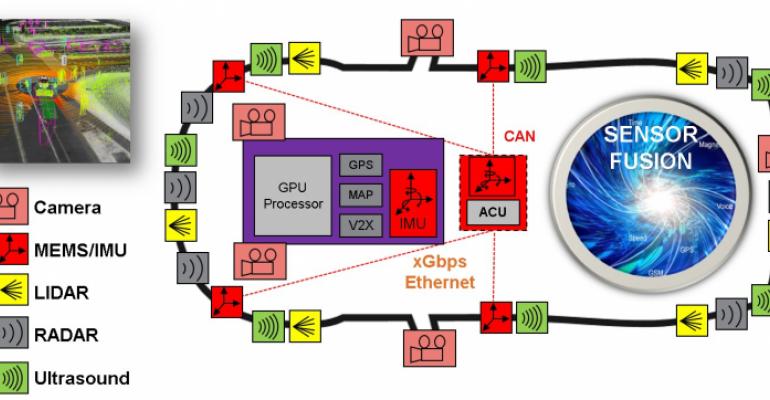 New sensor technologies will lead the way in 2019, as automated cars begin to take aim at full autonomy.

Advanced forms of radar, LiDAR, and inertial measurement will begin to move into small fleets of test vehicles, setting the stage for cars that can see better and make quicker decisions.

“To some extent, we might see those technologies implemented in vehicles that have constrained environments, like robo-taxis in geo-fenced areas,” noted Chris Jacobs, vice president of autonomous transportation and automotive safety for Analog Devices, Inc. “Or they will initially be deployed in environments with benign weather conditions like Phoenix, Arizona.”

The new technologies incorporate significant improvements over existing sensor systems. They include:

Imaging radar: Imaging radar, which typically operates in the 77/79 GHz range, can do things that ordinary, 24-GHz radar sensors can’t do. The most important of those is object recognition.

“Radar typically shows you that something is there, but you have no way of knowing if it’s a bike, a person, or a semi-truck,” Jacobs said. “Imaging radar allows you to start differentiating between those things.”

Developers of automated vehicles consider that an important step toward autonomy because object recognition translates to faster reactions. If, for example, a vehicle recognizes a pothole in its path, it can take earlier evasive action.

Imaging radar also enables the vehicle to calculate the tangential velocity of obstacles moving into its path, enabling it to determine if a collision is imminent. Conventional radar can’t do that, Jacobs said. “We need more time for the car to react,” he told us. “And we think imaging radar will be a key to that.”

1,500-nm LiDAR: Next-generation LiDAR systems will employ a light wavelength of 1,500 nm instead of the conventional 900 nm, endowing them to see objects farther away.

“It will support four times the range of today’s LiDARs, at the same level of reflectivity,” Jacobs told us. “So you’ll be able to see a tire or a block of wood in the roadway at 150 to 200 meters. And you’ll be able to make a decision sooner about whether to drive around it or over it.”

The hang-up, however, is cost. The new breed of LIDARs employs more expensive radar systems. Moreover, its photo detectors are fabricated on two-inch-diameter indium gallium arsenide wafers, which are not amenable to automotive-scale production.

Jacobs contends, however, that the 1,500-nm technology is a key to more effective sensing on future vehicles. That’s why many OEMs have begun investing in the technology now, he said. “You probably won’t see active deployment of 1,500 nm in 2019,” he told us. “But soon afterward, we’ll start to see some applications crop up.”

The key advantage of these autonomous-grade IMUs is an enhanced ability to do dead reckoning measurements. Dead reckoning is a key to the car’s ability to “see” its way forward at moments when other systems—radar, LiDAR, and GPS—are unstable. Such is the case, for example, when a vehicle moves from a sunlit environment to a dimly lit tunnel. At such moments, radar and LiDAR might be unstable for a fraction of a second, and GPS reception might be lost. With advanced gravity-based IMUs, however, the vehicle won’t lose its way.

The key difference between the new breed of IMUs and the existing ones, commonly applied in electronic stability control, lies in their offset drift. Autonomous-grade IMUs express their numbers in degrees of drift per second, whereas the newer units are in degrees per hour. The bottom line is: The newer units are far less likely to drift off course.

And that difference could save lives, Jacobs said. “We believe that, in the case of unstable perception sensors, it will be absolutely critical to keep your car going forward either in the lane, or by pulling over to the side of the road,” he told us. “With the new sensors, if you lose all your external inputs, you’ll always have gravity.”

To be sure, none of the new sensing technologies will make their way into production vehicles in 2019. But in the years from 2019 to 2022, as the technology makes in-roads on test fleets, it will mature. Parts will shrink; power consumption will decrease; and costs will drop.

Moreover, such tests will give the public a chance to see the technology in action. “This is a very important step because it goes directly to consumer sentiment around the technology,” Jacobs said. “There has to be visual proof points that the technology is working. We need to demonstrate it in a safe way.”