HomeElectronicsAR and Mixed Reality Have More Potential, But VR Has All the Hype
Recent
Electronics
Consumer Reports 10 Least Reliable Cars for 2021
Dec 01, 2021
Introduction to Docker for Embedded Software Developers
Dec 01, 2021
Sponsored Content
Data as a Critical Raw Material
Researchers Use AI and Stimulation to Strengthen the Brain
Nov 30, 2021
POLL
Carbon-Fiber Composites on a Roll in Auto Wheels
Nov 30, 2021
Our First Drive in the Lucid Air EV
Nov 30, 2021
How to Build a Better Industrial Automation System Using PLCs
Nov 30, 2021
Getting Started with Cpputest for Embedded Applications
Nov 30, 2021

AR and Mixed Reality Have More Potential, But VR Has All the Hype 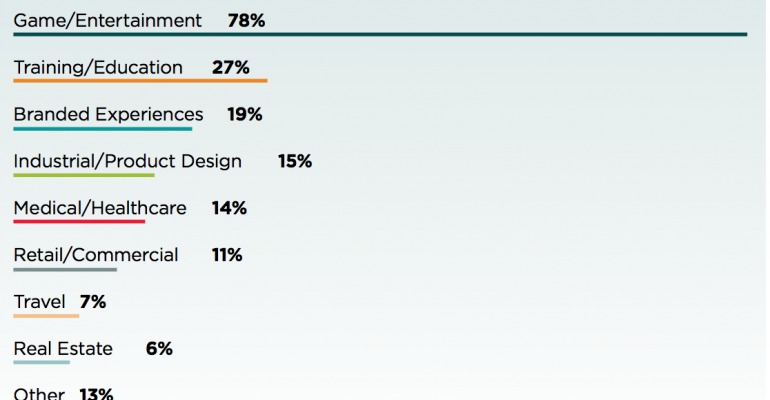 Developers are seeing more long-term potential for mixed reality (MR) and augmented reality (AR) over virtual reality (VR), as well as a need for more enterprise applications, according to a new survey. The UBM Game Network*, which runs the Virtual Reality Developers Conference (VRDC) as well as the Game Developers Conference (GDC), polled over 600 professional VR, AR, and MR developers in order to gain insight into the industry, including funding, hardware preferences, and market trends and challenges.

The second annual VRDC VR/AR Innovation Report reveals a cautiously optimistic community around virtual, augmented, and mixed reality, with developers seeing less potential for short-term profits. Long story short, developers feel VR, AR, and MR are viable, but have a long road ahead to the sort of mass adoption seen by the smartphone, for instance.

“While money still flows freely through the VR/AR/MR industries, it’s clear that most industry professionals aren’t expecting to turn a profit in the short-term,” according to the survey. When asked when they believed VR, AR, or MR would generate a profit for them or their client, 16 percent of respondents said in the short term, 39 percent said medium term, and 38 percent said only in the long term.

“The market still must mature,” commented one respondent who expected VR to be profitable only in the long term. “We are now in the ‘trough of disillusionment’ and there is no indicator as to exactly when that will end. I believe it has much to do with hardware.”

Another respondent agreed, saying that VR's biggest failure thus far has been not subsidizing the cost of headsets. “This is what caused smartphones to get such adoption,” the respondent said. “If the iPhone cost $1,200 when it first launched, we would have seen the same slow growth as VR.”

“For enterprise clients, the ROI is clear in the medium term,” another respondent said. “The consumer market is yet taking form, so I have no hopes of creating a monetizable consumer-facing experience that'll make money anytime in the next four to five years.”

Enterprise was called a go-to for developers looking for “easy answers” and “greater revenue” but was outpaced by VR, which succeeded in going straight to the consumer, by one respondent. “VR needed to embrace the enterprise first and get essential elements and cost down before going retail with unproven experiences,” another said.

Opinions on what market positions AR, MR, and VR would take were mixed. One respondent said, “I believe AR will be integrated into daily life (think mobile phone/second screen replacement) while VR with be used for education, gaming, and some enterprise.” While another commented, “Industrial, commercial and enterprise AR applications have more of an immediate business need to fulfill ... as opposed to discretionary gaming/entertainment."

“Likely AR wins in the long run because the market potential and markets served have a larger revenue potential in things like construction, automotive, product design, and enterprise collaboration. Where VR will focus on games, tourism and cinematic VR that are more consumer focused and smaller revenue per user,” commented another developer.

According to the survey, most of the work in VR, AR, and MR is, not surprisingly, focused in the games and entertainment space (78 percent). Training and education were a distant second (27 percent), while 15 percent of developers surveyed were working on industrial and product design applications and another 14 percent were working on medical applications.

Despite this, what the majority of respondents did agree on was that augmented and mixed reality technologies are more commercially viable than virtual reality. Seventy-seven percent of those surveyed said they believe AR or MR will win greater market share than VR in the long-term. “[AR is] a much easier concept for clients to grasp,” one respondent said. “And instead of being a platform in and of itself, it can be seen much more easily as a tool to make existing platforms better. I always pitched AR as a visualization tool rather than a new platform. New platforms scare people. Tools, on the other hand, are greatly appreciated.”

This optimistic outlook AR and MR in the long term was overshadowed however by the current hype around VR in gaming. When asked what they consider a great example of VR/AR/MR experiences the overwhelming response was toward games – particularly titles like the shooter game Robo Recall, the horror game Resident Evil 7, and Superhot, a popular puzzle/first person shooter title. What this suggests is that while developers see the enterprise potential in VR/AR/MR there has yet to be a killer app or use case in the enterprise space.

VR hardware was also the preferred platform for developers. When asked which VR, AR, or MR platform they were developing for right now, the HTC Vive headset was the most popular choice for developers (56 percent), the Oculus Rift was the hardware of choice for 49 percent of respondents while Samsung Gear VR (33 percent), Google Cardboard (24 percent), and Google Daydream (24 percent) came in far behind the very popular Vive and Rift.

You can download the full 2017 VRDC VR/AR Innovation Report here.

Which technology do you think will win out in the battle between VR, AR, and MR? Share your thoughts in the comments!

*The UBM Game Network is a division of UBM Americas, the parent company of Design News.