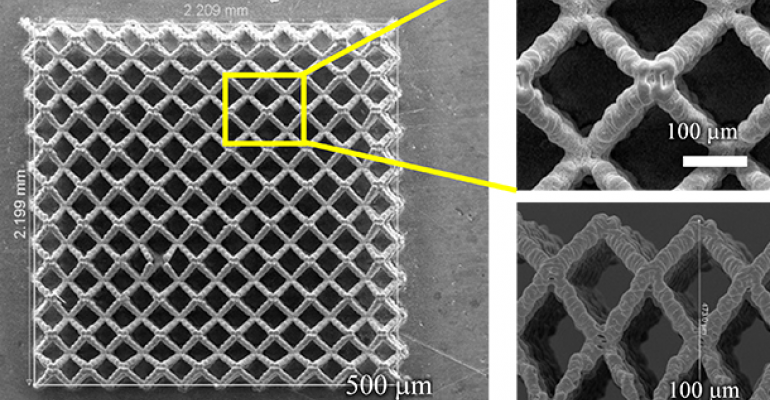 Present commercial lithium ion batteries can be considered two dimensional. Planar electrodes are parallel to one another, and lithium ions flow from one electrode to the other through the electrolyte that separates them during charging and discharging. Regardless if the battery is a cylinder, coin, prismatic, or flat configuration, the basic architecture of parallel electrodes is the same.

A battery’s capacity is related to the total amount of active material that participates in the electrochemical reaction. With solid planar electrodes, however, the distance into which the lithium ions can penetrate is limited. One solution is to make the surface of the electrodes very large, but this results in batteries that are heavy and whose size makes them difficult to package in small-scale personal electronic devices or even electric vehicles (EVs).

With their increase in electrode surface area, however, three-dimensional porous electrodes would provide an increase in the participation of the active electrochemical materials. Researchers have examined foams and other porous materials for this application. They have also looked at 3D printing.

Traditional 3D printing is extrusion-based, where a thread of material is extruded from a heated nozzle. Layer upon layer of the continuous tread are built up to create structures. Using this method, the structure that produced the best porous electrodes through additive manufacturing was interdigitated geometry—interlocked metal prongs like interwoven fingers.

This interdigitated geometry allows lithium ions to travel through the battery efficiently during charging and discharging. But it is not optimal. If the electrode could be 3D printed with pores and channels, the capacity of a lithium ion battery could be improved.

A new type of 3D printing—one using the deposition and buildup of individual droplets into three dimensional structures—is now being used to create experimental 3D printed electrodes. It is the work of Rahul Panat, Associate Professor, Mechanical Engineering at Carnegie Mellon University. Using the method developed in Panat’s lab, the researchers are able to 3D print structures having complex geometries that are impossible to fabricate using typical extrusion 3D printing methods.

“In the case of lithium-ion batteries, the electrodes with porous architectures can lead to higher charge capacities,” said Panat in a Carnegie Mellon press release. “This is because such architectures allow the lithium to penetrate through the electrode volume, leading to very high electrode utilization and thereby higher energy storage capacity. In normal batteries, 30% to 50% of the total electrode volume is unutilized. Our method overcomes this issue by using 3D printing, where we create a microlattice electrode architecture that allows the efficient transport of lithium through the entire electrode, which also increases the battery charging rates.”

3D printing the microlattice structure as a battery electrode—as the researchers show in a paper published in the journal Additive Manufacturing—vastly improves the capacity and charge-discharge rates for experimental lithium-ion batteries.

The researchers used an Aerosol Jet 3D printing system. “Because these droplets are separated from each other, we can create these new complex geometries,” said Panat. “If this was a single stream of material, as in the case of extrusion printing, we wouldn’t be able to make them. This is a new thing. I don’t believe anybody until now has used 3D printing to create these kinds of complex structures.” Panat estimates that the 3D electrode printing process could be ready for industrial applications “in about two to three years.”