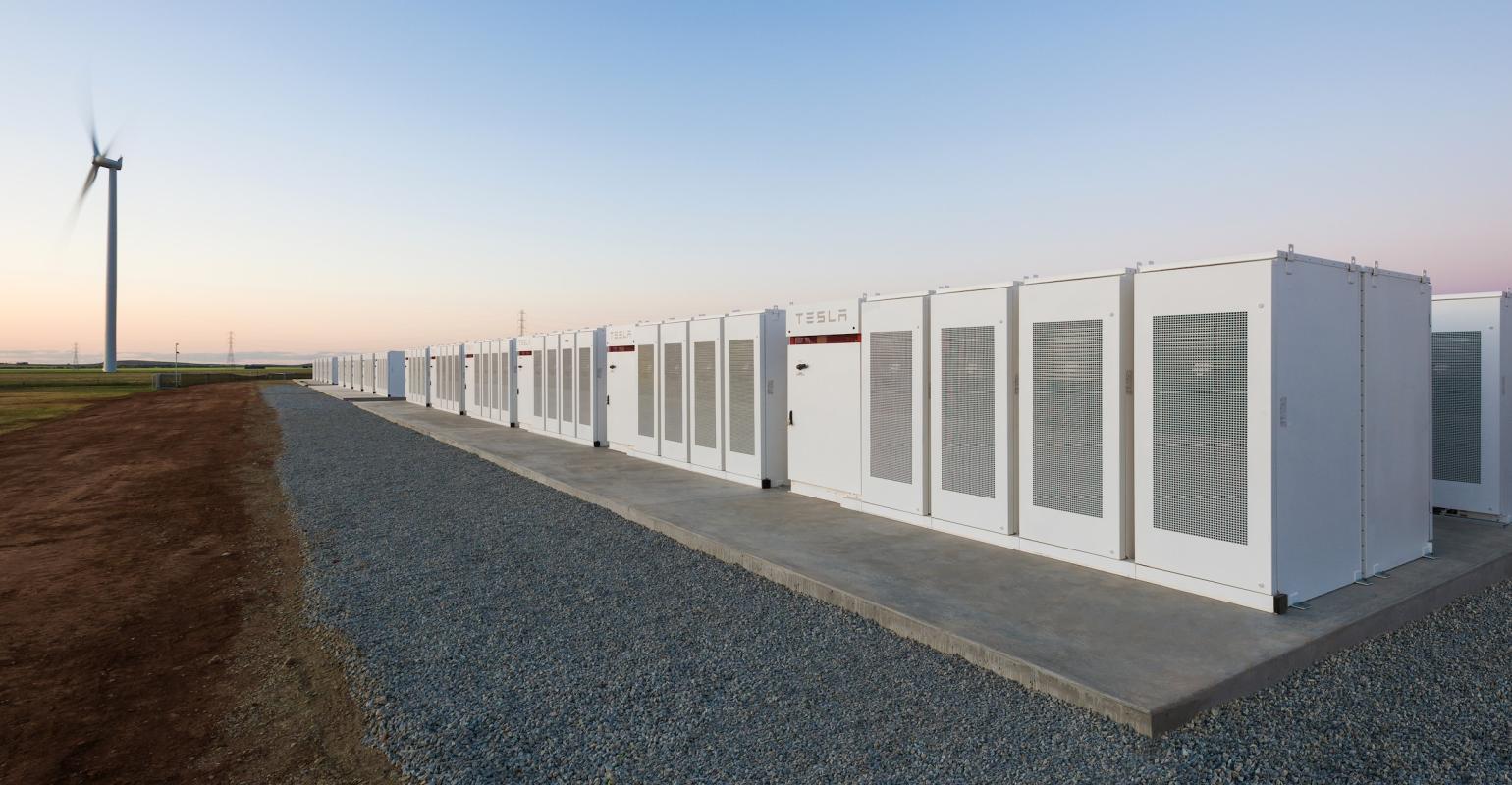 <p><strong>Blockchain</strong></p><p>Despite driving one of the key emerging trends this year, Blockchain is finding itself leaving the Peak of Inflated Expectations and headed into the Trough. The great Bitcoin bubble of 2018 probably has something to do with this, as Blockchain and cryptocurrency have become synonymous. But until your grocery store starts taking Bitcoins, don't expect to see them on everyone's debit cards anytime soon.</p><p>While no application has gathered the hype that crytocurrency has, Blockchain is still finding a place in other applications, including enterprise, <a href="https://www.designnews.com/electronics-test/filament-making-blockchain-iiot-easy-usb/80716323059036" target="_blank">IoT</a>, and even <a href="https://www.designnews.com/electronics-test/can-blockchain-help-revolutionize-energy-production/193104029158469" target="_blank">energy production</a>. Facilities like the Hornsdale Power Reserve in Australia (shown above) could be part of a Blockchain energy network.</p><p>(<em>Image source: Tesla</em>)</p>

The vulnerability of electrical power grids to increases in storm intensity has demonstrated a need to rethink traditional energy generation. With efforts from companies like Tesla, large scale battery storage and distributed energy resources can be combined to create virtual power plants that promise greater resiliency for future power grids.

Electric power grids are proving to be highly vulnerable to increases in storm intensity and aging infrastructures are cracking under the strain. Natural disasters that destroy power systems, although potentially devastating, are providing an opportunity to demonstrate the viability of alternatives to traditional electricity grids.

Repairing electric power grids is time-consuming, costly, and labor intensive. Indeed, five months after Hurricane Maria hit Puerto Rico, generating capacity is back to 85% of its pre-storm level, but hundreds of thousands of Puerto Rican homes and businesses are unable to obtain electric power from the still decimated grid. Even with the efforts of thousands of line-workers to repair power lines and towers, routing electrical power from a central power plant to outlying areas, often spanning difficult terrain, takes time. In the weeks following Maria’s landfall in Puerto Rico, however, electric automaker and battery manufacturer Tesla stepped in with an alternative.

Tesla installed a distributed solar-powered system at the Hospital del Niño (Children’s Hospital) in San Juan. Using its lithium-ion Powerpack battery storage system and an array of solar panels, Tesla has been able provide 24-hour electrical power to the facility. Since then, Elon Musk, the company CEO and founder, remarked on social media that Tesla will undertake additional distributed power projects in Puerto Rico in 2018.

Although distributed power systems using solar panels and battery storage show great promise for the creation of a robust alternative to a traditional power grid, it’s not the only way that battery storage can improve the reliability of power generation.

In September of 2016, the state of South Australia was hit with a 50-year storm that caused critical infrastructure damage and a region-wide power blackout affecting more than 30,000 homes. This was followed by additional blackouts last year during a particularly hot Australian summer. The South Australian Government needed more energy resiliency. Through a competitive bidding process, Tesla and the French renewable energy company Neoen were awarded the energy storage contract for the Hornsdale Wind Farm, located near Jamestown, South Australia. Romain Desrousseaux, deputy CEO of Neoen, which has renewable energy projects in Central and South America and Africa, commenting on the South Australia project on a company website reported, “Neoen is focused on delivering long-term, sustainable energy solutions to the country and projects like the Hornsdale Power Reserve will contribute to South Australia leading the way into a clean energy future.”

Tesla’s solution was to build what it calls the “world’s largest lithium-ion battery” with a capacity of 129 mW to provide support to the wind farm. The huge battery is uses Tesla’s Powerpack system and is comprised of thousands of the company’s 2170 cylindrical lithium ion cells. It was produced in the Tesla Gigafactory in Nevada.

Becoming operational in late-November 2017, the battery not only acts as a buffer for wind energy production, but also supports the entire South Australia power grid, charging when energy prices are low and coming online to support the grid with up to 100 mW of electric power. Unlike traditional reserve power solutions, which can take several minutes to provide power to the grid in the event of a problem, Tesla’s battery kicks in within a second or two of sensing a grid issue. An on-line widget (below) shows the charge and discharge status and the operation of the battery in real time.

On the heels of the successful Hornsdale Reserve project, the South Australian government is working with Tesla to create a virtual power plant that will create 250 mW of solar energy and 650 mW of battery storage. “The virtual power plant is being fast tracked by a $2 million grant and $30 million loan from the Renewable Technology Fund,” said Sam Crafter, executive director, Energy Plan Implementation, Department of Premier and Cabinet for South Australia, in a statement in response to an inquiry by Design News.

The South Australian government in September 2017 had called for proposals for innovations in renewable energy and energy storage. Tesla proposed the creation of a virtual power plant with 250 megawatts of solar energy and 650 megawatt-hours of battery storage. “The virtual power plant proposed by Tesla represented significant value and warranted investment by the fund,” noted Crafter.

According to information provided to Design News by Tesla, the structure of the South Australia virtual power plant is based upon other successful Tesla projects in places like Vermont, New Mexico, and Hawaii. “Tesla will install Powerwall and solar panels on up to 50,000 homes in South Australia by June 2022, starting with 600 homes in 2018,” stated the company.  The initial phases of 600 homes in 2018 and the 25,000 homes that follow will be a trial, while the third phase is considered by Tesla to be an operational program.  Homes will be outfitted with 5 kW solar panels and 13.5 kWh Powerwall battery systems, all at no cost to the homeowners or building tenants.

“At full scale the VPP (virtual power plant) adds about 250 megawatts of capacity to the system,” said Danny Price, managing director of Frontier Economics, the company managing the project. The cost savings are impressive. “That immediately improves competitiveness across the market. It will result in savings of about $180 million dollars per annum for all consumers, whether they are participants or not, simply because of these competitive gains,” Price noted in a corporate video.

Frontier Economics predicts a 30% savings in energy costs for participating households and, because each home will have its own backup battery that the system will continue to provide power to individual households during a grid blackout.

While Tesla’s efforts with large scale battery grid storage and virtual power plant projects are at a huge scale, other companies are undertaking similar programs, albeit at a smaller scale. For example, German solar-energy and battery company Sonnen GmbH announced in 2017 that it would work to create a 2,900 home virtual power plant using solar power in Prescott Valley, Arizona. The system will equate to 11.6 megawatts of solar energy and about 23 megawatt-hours of battery storage capacity.

Sonnen has also recently announced a project to build a virtual power plant near Adelaide in South Australia on the same scale of 50,000 homes as that announced by Tesla. The move away from traditional grid systems is growing as even multinational technology giant Siemens is building experience in micro-grids and renewable distributed energy resources that can be combined together to create virtual power plants.

Beyond the cost savings to homeowners that these projects promise, the resiliency that results from distributed energy generation is expected to ultimately produce a more robust power grid. With storms predicted to become more intense in the coming decades and a power grid that is, in many places, old and in need of repair, now is the time to put these lessons to use to build a more reliable power infrastructure worldwide.