5 Major Challenges for VR to Overcome 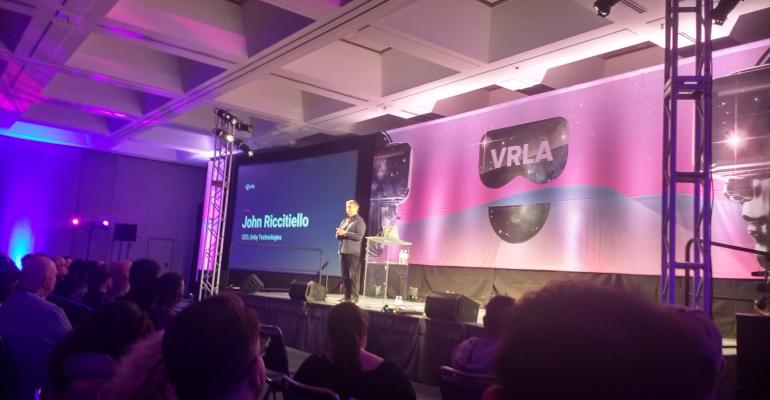 Call it early fatigue, the trough of disillusionment, or simple lack of outreach and understanding, but virtual reality (VR) is facing some key challenges on its road to mass adoption.

At the recent Virtual Reality Los Angeles (VRLA) conference and expo many companies were on hand to demonstrate the latest developments in consumer and enterprise VR and augmented reality (AR), but experts also agreed that VR and AR have some very key hurdles to overcome for businesses and consumers to get fully on board with the technology.

During a VRLA keynote presentation, John Riccitiello, CEO of Unity, told the audience that VR is entering a “gap of disappointment,” but it won't last very long. Unity makes the graphics engine of the same name that is behind many VR and AR applications out today. “One of the challenges w'e're facing right now is there's so much enthusiasm that people are forecasting crazy stuff,” Riccitiello said. However, he added mass adoption of VR is an inevitability if some basic conditions are met – which he believes will happen sometime in the next two years.

VR right now comes at too high of a price point for many.

A lot of big investors like Google and Facebook have pumped billions into the VR market, allowing for some very powerful hardware like the Oculus Rift to hit the market in the last year. The issue, according to Riccitiello, is that consumers weren't quite ready for it all.

“Price and content are absolutely critical for understanding whether our industry is going to get to maturity,” Riccitiello said. “ When you're spending $1500-2000 for a new tower PC as well as all the sensors and tethering for a head-mounted display [HMD], that's a lot of money! It's hard to come up with a product of any type, besides a car, that sells at volume at that price point.”

The good news is that is has given VR developers the chance to learn. For Riccitiello there are two promises that need to come for VR – that of the first 100 million users, and that of the next 100 million. But how do you get there? “ You need a comprehensive solution that includes CPU, GPU, HMD, that costs $1000 or less,” he said.

Take this from an enterprise perspective, where a design team may require several VR machines for its workflow and the price issue only compounds. Speaking to Design News at VRLA, Frank Soqui, general manager of the VR and Gaming Group at Intel, agreed. “From the enterprise perspective I would say the biggest challenge is, for lack of a better term, TCO [Total Cost of Ownership] -- how [VR] adds business value to what you're doing.

“In the B2C world it's very easy to see what that could be because you can influence consumers. In B2B or within a business it's really the collaborative aspects and being able to share.” Soqui said that, from Intel's perspective, companies see the value of VR right away on the enterprise side – particularly when it comes to collaborative tasks like sharing virtual designs across teams and virtual prototyping.

But even if you can overcome the price factor, VR still faces a very big hurdle in the form of a lack of must-have content.

“The number one challenge right now is that compelling content – content that's habit forming from a consumer perspective.” Soqui said.

While there are plenty of well-received games for VR as well as emerging use cases on the enterprise side, VR has still yet to find its killer app – that use case or program that will make VR essential for consumers and business.

But rather than a single application, Soqui believes adoption of VR will have to come through education –- letting businesses and the public experience what it can do, whether that be at conferences and expos, having experiences in public places, or doing social outreach. “Think of touchscreens for example,” he said. “At first touch seemed very gimmicky, but today if you touch a screen and it isn't a touchscreen it feels like somebody broke it. It's become habit forming and you count on it. So how do you that with VR?”

VR however will enjoy some challenges unique to technologies like touch because it comes in its own form factor. Unlike things like touch or voice control, which augmented exciting technologies like phones and TVs, VR is a almost whole new thing entirely with its HMDs and controllers. And making it available on phones has its pros and cons. “The phone gets people talking, but it's more of a snacking thing,” Soqui said. “People throw their Google Cardboard away and think they've seen all VR has to offer. But once you get people to try other VR experiences it becomes, 'Wow, I didn't know it was that, as well.' ”

If you've tried any VR experience you've probably noticed one very cumbersome aspect – there's a lot of cords. That's something that may be fine for more static experiences (i.e. a sporting event where you just sit and look around), but if you want users to move around, especially in an enterprise setting, where multiple users may be sharing a design space and walking around, having a bunch of cords streaming around a room becomes annoying at best and a safety hazard at worst.

“The problem with the cord is if a user is effectively locked into a box, restricted by the cord, it essentially defeats the purpose of having them immersed in a supposed 360-degree environment,” Unity's Riccitiello said, emphasizing that freedom of movement is key for VR moving forward. “This industry won't work if you're tethered to a PC. It won't work unless you can experience things the way you do in real life.”

To illustrate his point Riccitiello shared a story of how he went to see the hit play Hamilton in New York. That same day he also visited Ghostbusters Dimension, a VR experience (which he disclosed was created with the Unity engine) that is branded as a “hyper-reality” experience. Players take on the role of Ghostbusters by donning VR gear with game play that requires them to move through a real world obstacle course. Ghostbusters Dimension has users wear computers on their backs (that mimic the Ghostbusters' proton packs) in order to give players a cordless experience.

“I preferred that experience to Hamilton,” Riccitiello said, with all seriousness. Bringing this same sort of experience into the home, Riccitiello believes, will be the true tipping point for VR – and it's only one to two years away by his estimation. “That experience will be at your home... There's a lot of enthusiasm now and it's already happening in bits and pieces.”

The challenge of creating untethered, mobile VR is already being undertaken by a lot of companies – creating what's called inside-out tracking, that allows VR headsets to track position without the use of external sensors. Startup Chirp Microsystems, for example, is attempting to do with with ultrasound sensors, while big names like Oculus and HTC are already promising their next generation headsets will be cordless. In 2016 Intel acquired Movidius, a computer vision and deep learning company whose technology Intel is leveraging to create inside-out tracking with six-degrees of freedom movement.

VR and AR technologies, on all ends from collaborative enterprise to consumer entertainment, are already demanding more than ever from our computer hardware (see price concerns mentioned earlier), and soon they'll be doing it for our data communication speeds as well.

The answer for many lies in the further development of 5G – opening up more of the spectrum for faster wireless communication. Soqui said Intel is already working to develop technologies that would use the 60 Ghz spectrum for wireless VR and is working on beamforming and signal bouncing methods to keep these higher frequencies from being blocked by solid objects. The company is also developing a 5G modem that it says is the first 5G RFIC to support both sub-6 GHz and mmWave spectrum.

5G will also have larger implications as the Internet of Things (IoT) expands. Other companies like Qualcomm and T-Mobile are also investing heavily into 5G development and National Instruments recently announced a channel sounder system, created in collaboration with AT&T, for scientists and engineers working to develop 5G technologies.

Speaking at DesignCon 2017 this past January Dr. Yogendra Shah, senior director at InterDigital Communications, a mobile technology research and development company, echoed these ideas. “When you first heard of 5G four years ago, it was all about low latency and mass connection of devices. Over last three to four years it's come down to something a lot more practical,” he told the DesignCon audience during a talk, “Designing to Evolving 4G and Pre-5G Requirements.”

“What we see is a clear set of goals and objectives for 5G. ... If you want augmented reality into your devices you want to push your download data rates to 10 Ghz.” Shah said the spectrum currently available for cellular communication is simply not adequate for the demands VR and AR (as well as other IoT technologies) will place on networks. “Today's 4G communication is is based on sub-6 Ghz. That spectrum is not enough. You need to expand the spectrum to much higher bands.”

“For example if I'm in an enterprise and there's a headset do I want someone to steal my headset? Do I want someone to take the headset, and put it on, and see the collaborative thing I'm doing?” Soqui said these are all questions Intel is grappling with. “Maybe we need to do things like biometric tracking, authenticating the end user, I need to have the headset managed in with IT environment – the security and manageability aspects are the things we're looking at next.”

The same security measures companies have already applied to laptops and desktops will have to be applied to VR headsets and rigs. It could be another form of attack or all of sudden that expensiive headset gets used somewhere else – that's an important asset,” Soqui said. “So what do you do? You make it less usable outside of the environment.”