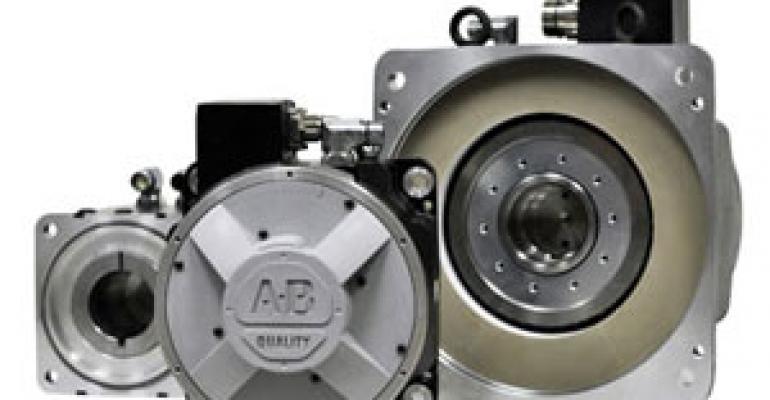 Imagine you are designing a machine that needs to move a 200-pound load. You do quick math to identify the properly sized motor with an inertia that precisely matches the load. You specify the motor, but will the motor achieve the desired movement of the load in the required time? Will the machine provide optimum stability and efficiency? Maybe or maybe not, but often the key is the mystery of inertia matching.

Most technical manuals recommend a 1:1 match between the motor and load, and usually advise designers to never go above 10:1 load-to-motor inertia ratio. The reason why this "rule" has worked so well in the past is relatively simple. Imagine a servo motor driving a load through two meshed gears that aren't perfectly matched, allowing a certain amount of backlash between the motor and the load.

When the motor turns one direction, the gear teeth engage and the controller sees the full load inertia. When the motor stops and reverses direction, it is temporarily decoupled from the load due to the backlash. Therefore, the controller only sees the motor inertia. Since the controller doesn't have the ability to store multiple gain settings for different loading conditions, the system has to be either de-tuned significantly or may be simply un-tunable. Minimizing the difference between the loaded and unloaded conditions, such as minimizing the inertia ratio, can help maximize the possibility of a successful outcome.

However, adhering to these "rules" may result in sub-optimal solutions and can greatly increase the cost of a motion solution. For example, the 1:1 ratio often causes engineers to specify larger motors than necessary. While adding a gearbox or belt drive can reduce the reflected inertia and required torque, these mechanical components can demand frequent adjustment and can introduce backlash and compliance into the servo system.

Today we have a much better understanding of the variables that influence the level of acceptable inertia mismatch, primarily requirements for dynamic system performance and mechanical system stiffness. At one extreme, if an extremely sloppy mechanical design is applied in a highly dynamic application, such as a delta robot, even a 1:1 inertia match may not result in a solution that meets performance expectations. At the other extreme, if there is an extremely stiff connection between the motor and the load in a low dynamic application, such as an indexing table bolted directly to a motor, inertia mismatch can effectively be ignored completely with a highly successful outcome.

The Beauty of Simplicity
One approach many designers take to overcome the uncertainties and inefficiencies of traditional machine design is to simplify the mechanics through the use of direct-drive motor technology. In the past, direct-drive solutions have been difficult to integrate and cost-prohibitive for many mainstream industrial applications. However, today's technology is available at a reasonable price from suppliers who understand both the mechanical and electrical control environment and help machine builders and end users realize a much faster return on investment.

Mechanical transmission components used with traditional motion control systems can cause excessive heat, friction and noise, all of which consume power. In fact, even a new, precision servo-rated gearhead is at best 90 to 95 percent efficient on average. Direct-drive technology practically eliminates all three forms of lost power, which often allows machine builders to specify a smaller motor and drive. This translates into savings in the initial costs of hardware as well as ongoing energy savings from lower current draw.

By connecting directly to the load, direct-drive motors eliminate the need for gearboxes, timing belts, pulleys and other mechanical components. This helps eliminate backlash and compliance, improves overall control of the load and optimizes system efficiency and performance. Because there are fewer parts that require ongoing maintenance, end users could also see increased productivity and can reduce the number and cost of spare parts.

Simplified direct-drive technology also provides a smaller machine footprint and can help cut assembly time. An example is that by installing direct-drive motors on a rotary knife system, one converting machine builder was able to reduce assembly time from 4.5 hours to 30 minutes by cutting out mechanical transmission components. Eliminating mechanical transmission inefficiencies also increased the percent of motor torque producing useful work (moving the load) by 11 percent. The improved efficiency resulted in an annual energy savings of more than 50 percent in this single application.

A Perfect Match
With its reliable performance and simplified mechanics, direct-drive solutions are becoming increasingly popular in mechatronic machine design. In traditional machine building, individual mechanical, control and electrical design teams often work independently to produce separate pieces of the overall machine. Trying to size and specify the electrical components before the mechanics are defined can lead to wasted time and rework, since parameters such as inertia and torque are heavily influenced by the choice of mechanical components.

By optimizing the mechanical design from the start using direct-drive motors, designers can more easily address configuration and integration issues up front and minimize the chance of encountering power sizing problems in subsequent stages. A concurrent engineering approach can produce higher performance machines that run on less energy and are easier to maintain and update for product or design changes.

Software tools also help machine builders reap the full benefits of mechatronics by making it faster and easier to select, size and optimize motion control systems. With Motion Analyzer software from Rockwell Automation, for example, engineers simply enter information about the load and how it needs to be moved, and the software selects the most efficient motor-drive combination. From a pull-down menu, designers can then select an actuator, for instance, without having to figure out complex calculations or look up specifications in the manufacturer's data sheets.

In addition to sizing and selection, the software provides performance and simulation analysis that helps engineers more effectively investigate machine behavior and select a mechanical design - along with the optimum controls and software - that will maximize machine performance. These simulation tools help reduce design time and help minimize errors that are more difficult and expensive to correct farther along in the development process.