DesignCon: Go Because I Need To; Stay Because I Want To 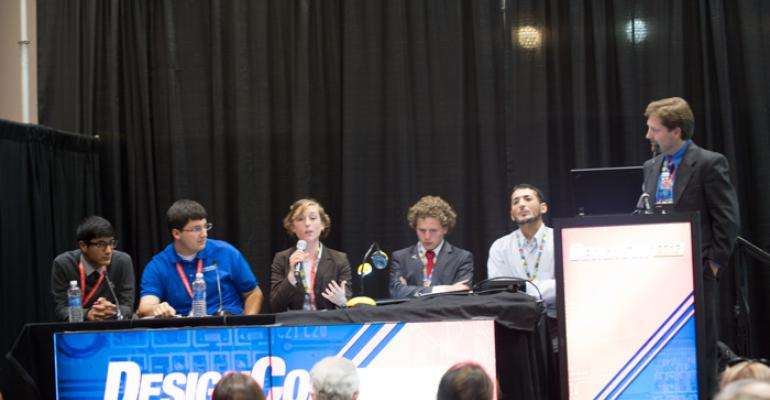 There are few events in the engineering calendar quite like DesignCon, as much for the serious nature of the design issues and problems as the environment in which they’re being addressed and solved.

Over breakfast recently, I was discussing with a friend how important events are in the life of an engineer. Then, I realized that in just a couple short months, I’ll be packing up to head to Santa Clara for one of the best and most useful technical engineering mashups of the year: DesignCon!

Having spent many years traveling to and participating in shows as part of a large corporation, it has become clearer as an independent just how important events are as both educational and community meet-and-greet opportunities. The topic of discussion over breakfast was specifically about what’s most enjoyable at events: big loud evening parties where everyone acts like they’re having fun, or hands-on educational sessions.

Speaking from a purely personal point of view, it’s more enjoyable to get together and learn something useful while chatting and collaborating with other engineers. The starkness of my own preference was made clear to me at one of the Design Automation Conference (DAC) 2018 parties. A year ago, I got to sit down in Philadelphia at a LoRaWAN session and learn with a room full of engineers how to get up and running with a low-power LoRaWAN wireless connection. The session was led by a Microchip engineer, but as with almost all demonstrations and lessons, there were “complications” that were beyond his control, such as a flooded Wi-Fi router that couldn’t handle the packed room. But as it turns out, working with the folks next to me and collaborating to resolve ensuing complications with the software itself ended up being all part of the fun. I literally had to be dragged out by a colleague to get to the next session.

At the DAC 2018 party, however, the music was too loud (for me) and wasn’t something I’d normally listen to. I said a few hellos, tried to talk and listen, gave up, and went back to the hotel. Maybe it’s an age thing. Regardless, it wasn’t very useful or enjoyable (for me), though it seemed others were having fun.

The point is: Engineers are often happiest solving problems. And the best way to learn how to solve new problems is to learn new tricks, techniques, approaches, and technologies—even if that means making time out to attend an event.

I once heard someone comment casually about engineers and problems: A typical young engineer starting out would prefer to stay up all night in a dorm closet solving a technical problem, rather than give in to it.

That about sums it up. Is it purely the challenge? Is it ego? One-upmanship over classmates, friends, or colleagues? Maybe it’s a bit of all of the above. All I know is that there’s nothing quite like the feeling of euphoria that hits when something works that didn’t work before.

Feed Your Need at DesignCon 2019

To keep getting that hit of euphoria, events like DesignCon are not only needed; they’re compulsory. I’m personally not a fan of Chip Head. Like an electronic version of Pennywise, he just creeps me out and I always avoid him. But otherwise, DesignCon is almost the perfect way to start the engineering year.

For 2019, the management team added a new track on Machine Learning (Track 15). That’s about as appropriate and up to date as it gets. Machine learning is all about data and pattern recognition and feature extraction. I’ve often said that few people know more about gathering data than test and measurement gurus. The problem is analyzing the data. Typically, only 10% gets analyzed in any real fashion. Machine Learning is changing all that and exposing patterns for which one would never have even thought to look.

There’s lots more to look forward to, of course: technical papers, panels, and boot camps on literally everything from Track 1 on “Signal & Power Integrity for Single Multi Die, Interposer & Packaging” through to Track 15 on “Machine Learning for Microelectronics, Signal & System Design.”

I hope to see you there. But before I do sign off, there’s a music video from the ‘80s, or was it the ‘90s (oops)? In it, there’s a kid dressed in a bee outfit that can’t seem to find a place to fit in. Near the end, he comes to a wire fence and behind the wire fence, there are a whole “hive” of other kids dressed as bees, just like him, all playing and having fun. That’s the feeling I get when I walk into DesignCon: These are the real engineers making real things work. And that’s why I hope to see you in January (29 to 31, 2019) in Santa Clara!

Patrick Mannion is an independent writer and industry analyst who has been tracking developments in wireless communications for over 20 years.