How Generative Design Can Harness the Power of GPUs 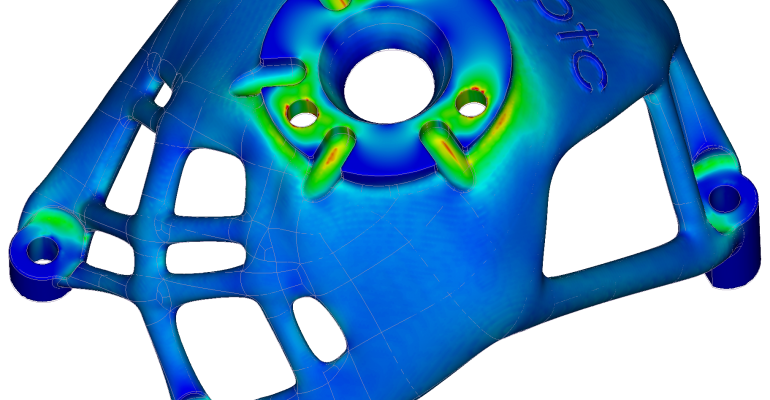 GPU-accelerated simulation and generative design can collapse design cycles and bring innovation to the market faster.

When combined with generative design technology, the efficiency gains of GPU-accelerated simulation are magnified even further.

The days when design simulation was limited to stress analysts are over. Today, product designers have the computational power at their fingerprints to run simulations directly in their 3D CAD modeling environment. Accelerated by the GPU power of modern computers, these simulations allow designers to make informed decisions at an interactive pace — without waiting for a stress analyst to mesh the design and run a finite-element analysis (FEA).

At this point, even relatively inexperienced designers can estimate how their design will perform without necessarily understanding how to run an FEA analysis. Considering the industrial skills gap, GPU-accelerated simulation is a gift for engineering teams hoping to do more with less.

The mathematical models behind GPU-accelerated simulation can show how a number of variables impact the design, including nonlinear static stress, vibrational tolerance, fluid dynamics, and heat transfer. These variables don’t exist in isolation, of course. The good news is that GPU-accelerated simulation is rapidly approaching the point where it can assess how the synergistic interaction of these variables impact a design’s performance.

The implications for product design cycles are significant, allowing teams to iterate faster and avoid costly prototyping steps and late-stage design changes. But GPU-accelerated simulation on its own is just the beginning.

For those unfamiliar, generative design is a design process where artificial intelligence optimizes designs for parameters and functional objectives set by the engineer. The engineer uploads their design; sets the loads, material constraints, and boundary conditions; identifies their functional objectives; and the algorithm optimizes the layout of material within the design space to meet those objectives and maximize performance.

When using a generative approach to design optimization, genetic algorithms iteratively tweak the design and simulate performance given the new configuration. In this way, more efficient and high-performance design configurations emerge. The greater the GPU processing power, the faster the simulations the system can run, enabling the generative design tool to optimize for more variables and evolve more solutions in parallel.

Optimize for Manufacturing and Beyond

One of the major advantages of generative design over basic topology optimization is the ability to optimize for different manufacturing techniques. In the past, it wasn’t often feasible to manufacture the complex, organic shapes produced through topology optimization. The optimized forms could inspire designers, but these designers still had to use their expertise to transform the optimized design into something manufacturable. With generative design, by contrast, designs can be optimized explicitly for extrusion, casting, additive, or other methods -- saving time and energy.

The power of generative design doesn’t stop with optimization for manufacturing. This method also allows for optimization around a wide range of functional objectives including materials, strength, heat transfer, fluid dynamics, and weight. What’s more, from a purely commercial perspective, a generative design approach attached to live market information can consider cost constraints. In the end, generative design discovers solutions that balance these competing objectives most efficiently.

To illustrate, consider a simple bracket. There are countless applications where a bracket is used to affix one part to another larger part. The function will generally be the same, but in each case, the bracket may have different force loads acting on it and different points of connection, not to mention a host of other variables depending on the use case. A generative design module can be created for brackets, in which the engineer tweaks the variables to suit their problem, and the generative design algorithm optimizes the design for the engineer’s unique objectives.

By automatically finding solutions to complex design challenges, generative design can dramatically increase productivity and compress design cycles, even more so than GPU-accelerated simulation on its own. Together, these methods make it possible to promote operational efficiency, accelerate innovation, and bring their products to market faster.

Jesse Coors-Blankenship joined PTC as a Senior Vice President of Technology, Advanced Development after the company acquired his advanced generative design software startup, Frustum Inc. Before starting Frustum Inc., Jesse was a professor at Columbia University where he taught students how to use generative design technologies.