VR And AR Are Not the Solution To Our Housing Crisis 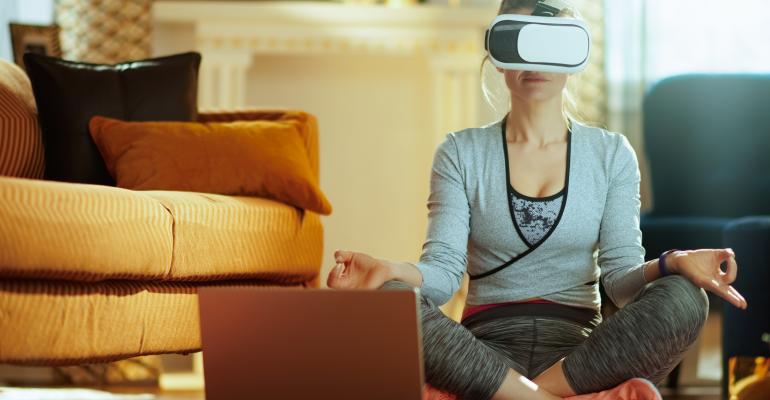 Facebook CEO Mark Zuckerberg has pitched VR and AR as a means to alleviate our housing crisis. He and others like him couldn't be more wrong.

No one has ever accused Facebook CEO Mark Zuckerberg of being particularly socially conscious.

In a blog post on Facebook (because where else would he post it?) Zuckerberg outlined his vision for technology going forward into the new decade. One of his predictions? That the proliferation of augmented and virtual reality technology will expand options for remote work and telepresence, thus helping to relieve issues of affordable housing and income inequality:

“The ability to be "present" anywhere will also help us address some of the biggest social issues of our day – like ballooning housing costs and inequality of opportunity by geography. Today, many people feel like they have to move to cities because that's where the jobs are. But there isn't enough housing in many cities, so housing costs are skyrocketing while quality of living is decreasing. Imagine if you could live anywhere you chose and access any job anywhere else. If we deliver on what we're building, this should be much closer to reality by 2030.”

On the surface, Zuckerberg is right about a few things. VR and AR are already opening up new opportunities for remote work and virtual collaboration. Automakers have been using VR as part of their product design workflow for years now. More and more factories are using AR technology to “augment” workers and give remote technicians easier access to training and expertise. Even the medical device industry is embracing VR as a means of training surgeons and even conducting robotic surgeries remotely.

...None of this is going to lower anyone's rent.

The United States is in the midst of a growing housing crisis. Major cities across the nation are seeing a spike in homelessness for a myriad of factors ranging from low wages, to exorbitant rent costs, to a lack of available affordable housing, and various other socioeconomic factors such as a dearth of mental healthcare resources. The National Law Center on Homelessness & Poverty cites insufficient income and a lack of affordable housing as the leading cause of homelessness in the United States.

Southern California has become ground zero for the nation's homeless and housing crisis. According to Los Angeles city officials, the homeless population increased 12% from 2018 to 2019 with a total of 58,936 homeless reported in LA County. Of those, 27% are defined as chronically or long term homeless – meaning the rest are situational homeless (those who have become homeless because of job loss, natural disaster, or a similar event) and episodic homeless (those who cycle in and out of homelessness due to mental illness or addiction issues).

Experts closest to the situation agree the homelessness situation is directly tied to the lack of affordable housing and low working wages. According to the Los Angeles Homeless Services Authority, an LA resident needs to earn $47.52 an hour (about $95K per year) to afford the median monthly rent without burden. That rate is far above the median household income in LA of $64,251, as reported by the U.S. Census Bureau.

Indeed, a significant portion of Los Angeles residents are considered “rent burdened” – meaning they spend at least 30% of their income to cover rent costs. Los Angeles is only third on the list of America's most rent-burdened cities. The top spots go to San Diego, in second place, and Miami at number one. But the numbers don't fair better elsewhere. Cities as varied as San Jose, New York, Philadelphia, Portland, Chicago, and Richmond all make up the country's list of most rent-burdened cities.

The Reality Of Remote Work

But help is on the way... at least if you believe numbers by the real estate analytics firm RealPage, which predicts the number of new rental properties in 2020 to hit 370,942 units – a 50 percent increase from from 2019. The lion's share of these units will go up in cities where poverty and inequality are persistent issues including Dallas, Los Angeles, DC, Houston, and Atlanta.

RealPage didn't release any data or estimates as to how much of that new housing will be classified as affordable or reserved for low-income residents. But the Wall Street Journal has reported the catch is that 80% of these new units will be high-priced luxury apartments. “A lot of these properties are competing for a small group of renters,” Greg Willett, a chief chief economist at RealPage told the Wall Street Journal. “A typical renter can’t afford this brand-new product.”

But that's where the brave new world of remote work comes in, right? To be clear there are some very real benefits to remote work. Remote work has grown 44% in the last five years alone, according to data from FlexJobs, a job search site focused on remote, part-time, and freelance work. Workers report the option to work remotely increases morale, reduces stress, increases their productivity, and makes it easier to save money by forgoing costs associated with expenses like commuting, childcare, and eating out.

Research has also shown that remote workers make as much, or even more, money than their in-office counterparts. According to a survey by teleconferencing company Owl Labs, 16% of remote workers make $75K to $99K per year, compared with 9% of on-site workers.

Companies themselves are even incentivizing their workers to work remotely or reduce their commute. Big tech companies like Google and Zuckerberg's own Facebook often supply housing or housing assistance to their employees and offer bonuses for employees who live close to the office. The flip side to this coin is that the tech companies themselves may actually be exacerbating the housing problem they're trying to alleviate.

None of this offers any incentive to landlords and real estate brokers to lower costs, however.

Your landlord doesn't care if you work at home, at an office, or on Mars. Rent is what it is and it's due every month. Even if savvy remote workers were to abandon crowded metros like LA, New York, and San Francisco for more affordable pastures, there's nothing to suggest they won't bring a surge in housing costs with them. Seattle, for example, saw a 17% increase in rents in the metropolitan area from 2011-2015 after major tech companies including Amazon, Microsoft, and Google opened offices around the city.

The impact of tech companies on housing prices has become so prominent there's even a name for it – “The Amazon Effect.”

Perhaps there is a highly optimistic future ahead in which VR and AR take remote work to entirely new realms by offering a level of immersion and interactivity comparable to an office, factory, or workshop. But the technology has a long road ahead to deliver on that potential. Many VR users can't use it for more than a a few minutes without experiencing some level of discomfort – let alone the hours that make up a full work day. Researchers are still working to understand the long-term health implications of strapping ourselves up with VR hardware on a regular basis.

While headsets are becoming untethered, lighter, and offering higher resolutions all the time, there's still a lot to be done in the way of control interfaces and haptic feedback that will give users an experience with any real-world fidelity.

For augmented reality's part, while its use is certainly on the rise, the benefits of AR – outside of training – seem to run contrary to the traditional idea of remote work and yield the most benefit to on-site workers and field technicians.

And let's be honest. Not all work can (or should) be done remotely. Manufacturing, healthcare, retail, and education all still benefit from on-site expertise. How many factory workers could do their job remotely? What about a plumber or electrician? A construction worker? How many patients would trust a medical device that was developed entirely by a team working remotely?

Rather than let their employees work remotely, many companies in manufacturing and other sectors are just as likely to replace workers with robots or other automated systems. Which is in itself an area of increasing concern and debate.

Even with a good wage outlook for remote workers, income growth and wages are not keeping pace with housing costs.

According to the latest State of the Nation's Housing report from Harvard University's Joint Center for Housing Studies (JCHS):

“Affordability is particularly challenging in the nation’s 25 highest-cost metros, where over three-quarters of renters making $30,000– 44,999 were cost burdened in 2017, compared with just one-third of same-income renters in lowest-cost metros. In addition, more than two-fifths of renters in highest-cost metros earning $45,000–74,999 were cost burdened, compared with less than a tenth of same-income renters in the lowest-cost metros. Note, however, that households in this income range would be considered very low income in some high-cost areas such as San Francisco, where 50 percent of the HUD area median income for a family of four is $80,600. “

Those numbers become more troubling when considering that this income disparity hits minorities the hardest. “Among homeowners, 30.2 percent of blacks, 29.6 percent of Hispanics, and 27.3 percent of Asian/others were cost burdened in 2017, compared with 20.4 percent of white homeowners,” the JCHS report says. The report also notes that, “the lower average incomes of blacks and Hispanics contribute to, but do not fully explain, this racial/ethnic disparity since black and Hispanic households earning less than $15,000 are still more likely to be cost burdened than whites at that income level.”

Tech and engineering make up one of the most notable examples of these issues as the industries have long struggled with issues of gender and racial diversity.

Zuckerberg and those who share his views have a vested interest in workers latching onto this William Gibson-esque prophecy on the future of work. Facebook, after all, is the owner of Oculus, one of the most prominent VR hardware companies. And many major tech companies including Google, Microsoft, HP, Qualcomm, Intel, and HTC contribute to the VR/AR ecosystem either through a direct product or some other hardware offering for the enterprise space.

There's big money to be made in the idea of workers embracing remote VR/AR-based work. But that money isn't necessarily for the workers themselves. If VR/AR technology continues to grow, there's little doubt that the day will come when some workers will be able to strap on their VR/AR gear and do their job remotely from the comfort of their beach home.

But the rest of us will still have to live and work in the real world.