HomeDesign SoftwareUK Firms Want to Close the Loop on Aerospace CAD and CAE
Recent
Design Software
AAA Testing Highlights Automated Driving Failures
May 25, 2022
Top 10 Semiconductor Suppliers of 2021
May 25, 2022
Strategies to Reduce Noise and Vibrations in Vehicles
May 25, 2022
NI CEO Says Data and Testing Key to Future Technology Success
May 25, 2022
POLL
NASA Space Missions: To Infinity and Beyond
May 25, 2022
Rivian Patents Automated EV Charging Connector
May 24, 2022
3D Molding Analysis Software Moves to Smart Design
May 24, 2022
'A Game Maker's Life' Book Looks Back at the Invention of Iconic Toys
May 23, 2022

International Techne Group and Cambridge Flow Solutions recently announced that they have been jointly awarded a UK government grant worth US$1.7 million to marry their aerospace design tools.

International Techne Group (ITI) and Cambridge Flow Solutions (CFS) recently announced that they have been jointly awarded a UK government grant to marry their technologies for the benefit of aerospace manufacturers in the United Kingdom. The £1.2 million ($1.7 million) grant, supported by the Aerospace Technology Insitute (ATI), will allow the two partners to further develop their particular approaches to advanced geometry and meshing functionality, then interface their tools, ITI's CADfix and CFS's BoxerMesh, so they can be used together for deploying engineering simulations.

The collaborative project, called AuGMENT, allows the two companies to work together for three years to develop an interoperable toolset for geometry preparation and meshing, taking advantage of the capabilities of each partner's technologies. Both ITI and CFS produce solutions for representations of geometry and automated meshing, and both companies' products are used extensively in aerospace. 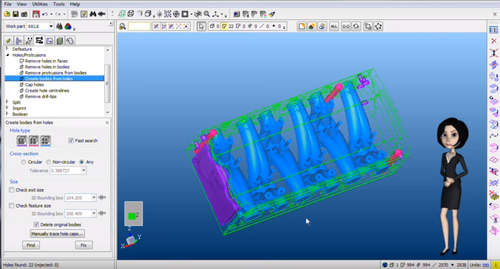 The project will also help close the “feedback loop” from simulation back to design, Gammon explained, allowing the user to “actually modify your CAD data from the results of the simulation.” The technologies ITI and CFS are developing “will let you to take the deformed mesh from the simulation and deploy it back to the original CAD model. You're using the simulation to update and change your CAD design.”

CFS's BoxerMesh is a grid generator that produces meshes from CAD geometries, using computational fluid dynamics (CFD). ITI's CADfix allows a user to translate, repair, and simplify a CAD model prior to exporting it for downstream use, such as in CAE applications. CAD models aren't necessarily designed for the pre-processing analysis needed for simulation, and model repair can be a painstaking task.

Expediting the pre-processing of CAD geometries will make it feasible for industrial design teams to produce engineering simulations earlier in the design process.

High-performance computing is making such simulations increasingly fine-grained and feasible for the critical, complex systems used in aerospace. “Companies are waking up to the fact that they have to use simulation to predict the behaviors and shapes for their products,” Gammon said. “It's becoming a means of survival, for distinguishing yourself from the competition.”

Simulation also helps engineering organizations address a growing challenge around intellectual capital, Gammon believes: the limitations of knowledge that exists only in the brains of individual professionals. “All engineers have learned over the years what shapes work,” Gammon said. “But the company can't retain their knowledge.”

Fine-grained analysis-based simulation can help record and manage such knowledge. It can help replace some of that expertise when it walks out the door, and it can even accomplish tasks that are beyond the capabilities of human engineers. “More and more companies want to do analysis of their products,” said Gammon, “rather than have a person design it out of their experience. They want to use simulation because humans just can't work this stuff out. The dream is having the solution tell them what the design should be.”

AuGMENT is not meant to result in a single product, Gammon explained. Interoperability is the objective. “Boxer will have enhancements that give it a native connection to CADfix geometry assembly,” he said. “CADfix will be able to integrate mesh and analysis directly from Boxer. We'll develop APIs that allow them to talk to one another.”

ATI is a research and development organization instituted jointly between the UK government and the country's aerospace industry. Founded in 2014, ATI represents a £2 billion ($2.8 billion) investment intended to bring together industry and academia for technology development and strengthen the UK's position in global aerospace markets. The aerospace industry supports some 3,000 companies in the UK, employing 230,000 people.