Technology has enabled many improvements in recent years. Now, German design company CAD Schroer has eliminated some typical 3D design weaknesses with the introduction of its updated solution.

While 3D design solutions to facilitate plant design are not new, in the past they had a reputation as being cumbersome. They had difficult and non-intuitive interfaces that limited their usability. They were also notoriously slow and took up a lot of space on IT networks thanks to sheer data volume. Traditional plant design solutions have performed well at large scale design, but in the past have had trouble converting 2D designs to 3D designs, necessitating that designs be remodeled manually. The difficulties compounded when a design depended on a large mix of content sources.

Technology has enabled many improvements in recent years. German design company CAD Schroer has eliminated some typical 3D design weaknesses with the introduction of its updated solution MPDS4 R6. The solution can generate complete 3D design data for manufacturing plants and factories while solving the problem of version control by allowing users to return to any stage of the design process to make modifications. Factory layout features allow engineers to build large-scale designs with supplier 3D equipment models and then add all of the routed interconnected systems to the 3D model. The end result for users is a highly accurate bill of materials, 3D viewables, 3D export, and 2D drawings. 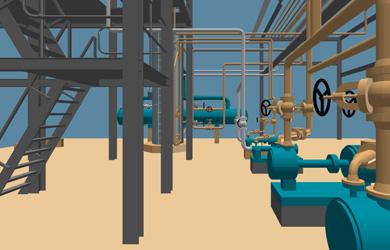 Mark Simpson, product line manager at CAD Schroer, told Design News that MPDS4 R6 is the result of years of research, analysis, and development. The product has evolved on the basis of user requests. One of the solution’s most significant features is easy conversion of 2D drawings to 3D designs thanks to its full, built-in drafting system that can open any DWG, DXF, DGN, or IGES arrangement drawing.

“We then select what’s useful from the typical ‘cut and pasted together’ plant drawing that people have, and then typically hide the rest,” Simpson said. “The geometry can then be put to two uses: shown at a level in the plant or a 2D floor plan direct in the 3D world. Adding two levels, we automatically create 3D solids from any closed shapes. This isn’t a solution that works for just a few lines, but is regularly used with many thousands of lines creating an instant 3D plant from the 2D. The process is often described as getting the 3D scenery to put the new 3D modelled plant into context.”

MPDS4 RG allows for collaboration between different engineers and designers, particularly in the creation of drawings, bills of materials, and compact 3D viewables that can be exported for review and are small enough to email. Collaborating designers can then mark up the designs using a review client. Composite 3D models are also exportable, either as typical MCAD STEP, DWG, and IGES or the more plant-oriented ISO15926-based formats.

In addition, the new technology automates some steps that would otherwise take a lot of time and effort.

“Normal metrics suggest that for piping alone to route in 3D and automatically create pipe isos reduces onsite issues dramatically, often by as much as 90%,” Simpson told us. “The best thing is that if a change occurs -- and this business is all about change -- the design is updated and the outputs are remade in seconds.”