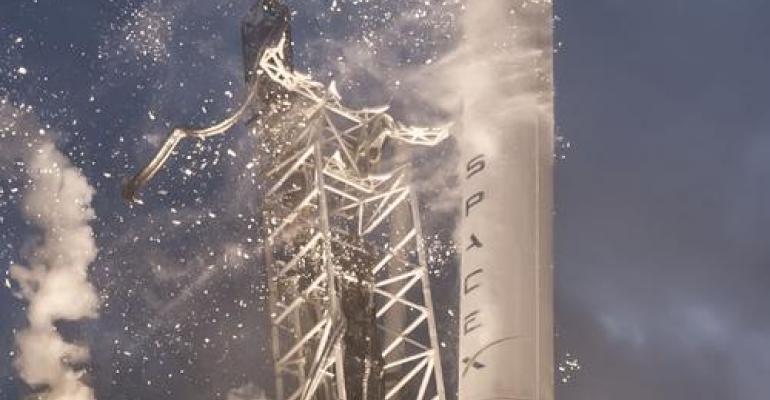 The SuperDraco thruster engine is an advanced version of the current Draco engine that's used in SpaceX's Dragon spacecraft to maneuver in orbit and during re-entry. SuperDracos will be used on the crewed version of the next-generation Dragon Version 2 spacecraft. There, they will power the vehicle's launch escape system, which is completely integrated into the spacecraft.

SpaceX says it has been working with 3D printing for almost three years to perfect the technology for flight hardware. Late last year, the company 3D printed a SuperDraco engine chamber made of Inconel, a high-performance super alloy, using direct metal laser sintering (DMLS). The part was designed and built entirely in-house. The company also successfully fired the engine chamber at full thrust, which is 16,000 lb per engine. Now, SpaceX is testing these engines in its crewed spaceflight program. Using 3D printing reduced lead-time by an order of magnitude compared to traditional machining: from first concept to first hot-fire test took slightly more than three months.

Last May, SpaceX completed qualification testing for the SuperDraco, including multiple starts, extended firing durations and extreme off-nominal propellant flow and temperatures. If necessary, each SuperDraco can be restarted multiple times. They can also deep throttle, which gives astronauts huge amounts of power as well as high precision. SpaceX said that during the hot-fire test, the SuperDraco engine was fired in two different profiles: launch escape and landing burn, and successfully throttled at thrust levels between 20% and 100%. The chamber itself was fired more than 80 times during hot-fire.

SpaceX's first 3D-printed rocket engine part already launched on the Falcon 9 rocket in January for the THAICOM 6 mission. One of the rocket's Merlin 1D engines contained a 3D-printed main oxidizer valve (MOV) body. The valve operated correctly with high-pressure liquid oxygen, withstanding high vibration and cryogenic temperatures. The printed valve body has better strength, fracture resistance, and ductility than a part made with traditional casting, as well as lower variability in material properties. It was also a lot faster to make, being printed in two days instead of several months. The valve is now qualified to fly on all Falcon 9 flights.