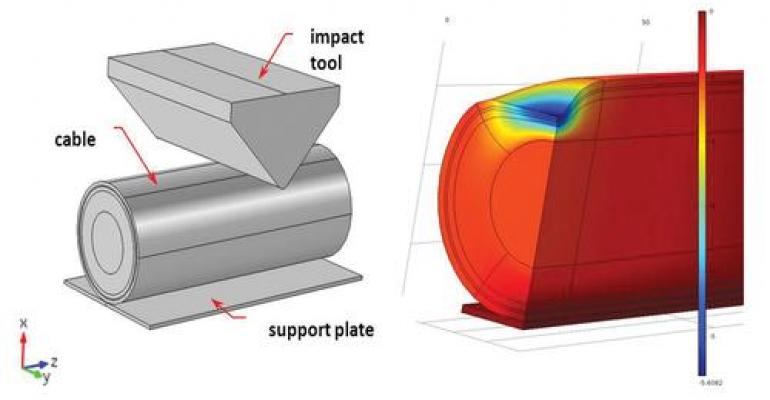 Back in 2010, the R&D group at energy and telecom cable company Prysmian Group made a big change in how it designs and tests new cables and systems. Prysmian's energy sector alone is made up of a wide range of products such as high-voltage cables for terrestrial and submarine applications -- these include both alternating-current (HVAC) and direct-current (HVDC) systems -- but this shift is already producing dividends in terms of new revenues and increased profits. By fully adopting multiphysics simulation software, the group is able to optimize cable and systems designs for a wide range of harsh environments.

Moving Beyond Approximations to Thermal Simulation

One important aspect to consider when designing a power transmission system is its ability to deliver the prescribed amount of current in steady-state conditions without exceeding the maximum permissible operating temperature. To address this point, a detailed thermal model of the system must be built that takes into account many variables: the structure of the cables and internal sources of electric losses (see Figure 1); the geometry of the installation; the installation environment (e.g., soil, water, forced or buoyant air); the ambient temperature; external loads due to solar radiation; and the system's proximity to other infrastructures. 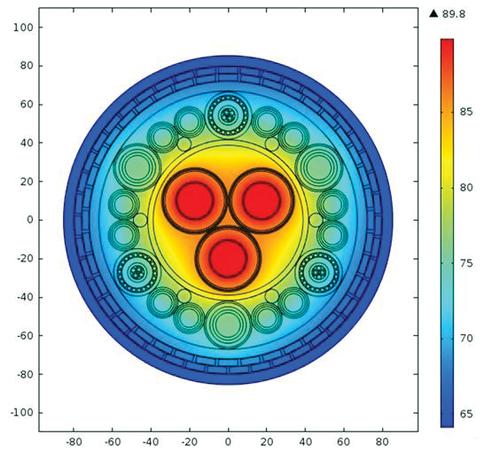 Prior to using multiphysics simulation, Prysmian and others in the cable industry employed formulas or calculation methods provided by international standards. The standards work pretty well for those installations in which the cables are in an undisturbed thermal condition (typically, underground). But nowadays it is becoming common to have such systems installed in or crossing regions characterized by a so-called unfavorable thermal environment, where, for example, the new cable system is in the vicinity of existing infrastructures such as other cables that cross the cable route.

Prysmian uses simulation software from COMSOL to build computer models that combine the structure of each cable -- that of the power transmission system, the load conditions, and the conditions in the external environment to obtain realistic and reliable simulations (see Figure 2). 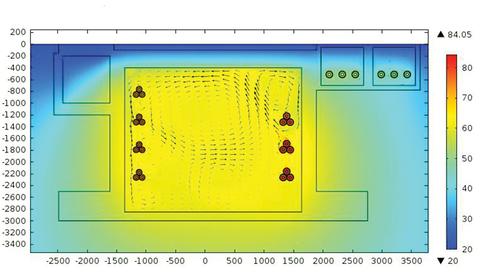 "The simulation software is able to solve these kinds of problems because it allows us to build a parametric model to optimize the geometry, the laying of the cables, and we can include the physics needed to account for the convection with the air," explained Massimo Bechis, modeling and simulation specialist at Prysmian. "We can do extensive transient analyses to account for daily variations in solar irradiation and ambient temperature conditions. We can account for current load changes instead of considering constant operating conditions. This allows us to satisfy requests to consider transient conditions due to load changes. Multiphysics simulation really solves these kinds of problems that were very difficult or even impossible to do before."

Optimizing the Process of Maintaining Perfection

Numerical simulations have already improved the way Bechis and his colleagues design some of Prysmian's most high-tech products. For example, parametric studies can be conducted to optimize the geometric dimensions or positioning of components in composite cables that may be made up of power conductors, cables for signal transmission, and hoses for delivery of fluid-all in the same structure. Bechis expects that progressive implementation of these methodologies will soon result in improved manufacturing processes as well.

MORE FROM DESIGN NEWS: What Does It Take to Evolve from 2D to 3D CAD Modeling?

Prior to using multiphysics simulation, many studies were done using mathematical tools developed internally by the company using commercial products such as Microsoft Excel or Visual Basic and based on simplified models. By leveraging the know-how gained from the internally developed code when transitioning to new tools, Bechis is able to model at a much higher level of detail and with much greater accuracy for this kind of system. With the use of multiphysics simulation, Bechis says the company has taken a big step forward and improved the level of the services it can provide to both designers and customers.

"Now we have a lot of requests from colleagues because, for example, they know the multiphysics software is available to help them analyze and solve many thermal, electromagnetic, and structural problems," Bechis said.

Of course, prior to using simulation tools, Prysmian never had a cable fail. But in order to achieve that perfect record, a large design margin was built into every cable and system because of the calculation procedures adopted.

"Now we are able to optimize, among other things, the structure of our cables and still meet the specifications," said Bechis. "We can also explain why we use a certain amount of material in a certain layer and show how we came to our decisions based on the modeling."

With simulation, it is possible to perform the analysis of a test impact on a medium-voltage cable (see Figure 3). The ability to simulate this kind of test on a computer makes it possible to optimize the thickness and the kind of materials used in building the external layers of cables. 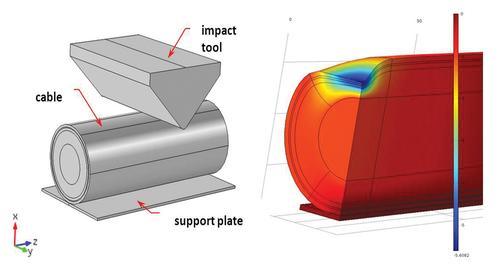 "We don't need to perform a lot of tests inside our laboratory," said Bechis. "Instead, we can do a lot of virtual tests on our computer. Then, when we are confident that we have found the optimum design for our cable, we can manufacture it and perform routine field tests in our laboratory."

Physical tests of actual prototypes are still performed, but the prototypes are much closer to the final design, and overall development time is therefore considerably shortened. These tests verify the mechanical behavior of the cables and systems so that the Prysmian team knows they can rely on their models.

One of the clearest indications of the success of the new modeling tools is that Bechis and his colleagues have been able to respond to a lot of customer requests that specifically ask that there be simulation in addition to the standards that are normally used.

"We are now able to provide a better service," said Bechis. "We are saving money. We have improved procedures for designing our cables and power transmission systems. We have an additional and powerful way to respond to requests from clients."