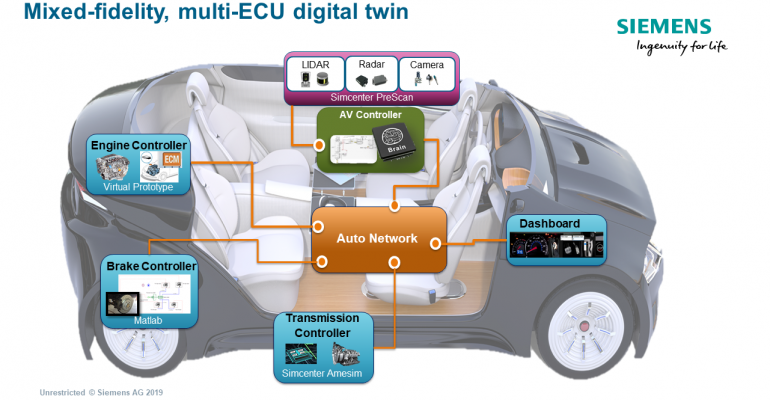 Siemens AG last week rolled out a simulation tool that could help automakers reduce the vast number of physical test miles required for the validation of autonomous vehicles.

Known as PAVE360, the new tool allows developers to design and test an autonomous vehicle system-on-chip (SoC) and its surrounding electronic components in a completely virtual environment. “We don’t just model the analog or electromechanical systems,” noted David Fritz, global technology manager for Siemens AG. “We actually model the silicon itself, and then go from the silicon to the ECU, and from the ECU to multiple ECUs, and then through the network, all the way out to the entire vehicle. And we do that within a virtual representation of the world.”

The new product performs its simulations by combining virtual real-world scenarios with virtual models of cameras, radar, LiDAR, processors and other components. In essence, it sends the virtual data from the “sensors” to the silicon, enabling the SoCs to be tested under any “what-if” types of conditions, including the presence of rain, snow, ice, sunlight, darkness, traffic, and moving obstacles, such as a deer, or a pedestrian pushing a baby buggy.

“What we’re talking about is moving toward a test bench, a platform, that can be validated against a physical vehicle that may not even exist yet,” Fritz said. “And doing it in a formal way, with a formalized methodology.”

The ability to do so is critical for automotive engineers, many of whom are now testing real-world scenarios by driving physical miles on the roads of California, Arizona, Michigan, and elsewhere. The problem with such techniques is that they don’t allow for so-called “scenario closure’’ – that is, scenarios that haven’t been imagined yet, Fritz said. “Right now, Tesla is driving millions of miles, Waymo is driving millions of miles,” he told us. “But we learned a long time ago, that’s only going to get you to 80% or 90%. It’s going to take forever to get you through that last 10%, to the ‘five nines’ (of reliability) that you’re looking for.”

Siemens engineers want to address that issue by creating a foundation that allows developers to show an equivalence between a virtual platform and physical platform, thus setting the stage for more testing and validation through simulation. In some cases, they might also use the simulation tool to run initial test scenarios, which could subsequently be carried out and completed on a physical test track, Fritz said. “It’s a better approach than driving forever and keeping your fingers crossed that there are no casualties,” he said.

To a large extent, PAVE360 is the result of $12 billion in acquisitions that Siemens has made over the past decade. By combining products from such companies as Mentor Graphics and Tass International, among many others, the industrial giant was able to assemble the pieces needed to simulate the behavior of an entire autonomous vehicle in a real-world environment.

Siemens is targeting the product at automotive OEMs. The goal is for PAVE360 to serve as a foundation, onto which the automakers could overlay software models of the brakes, steering, engine, or other components provided by the OEMs’ Tier One and Tier Two suppliers. In that way, automotive manufacturers could build up an all-encompassing simulation package to model the electronic performance of an entire vehicle and all its sub-systems.

“Up to now, the methodology that’s been used to validate autonomous vehicles hasn’t been the most rigorous,” Fritz said. “The alternative is to use high-fidelity models that are repeatable, deterministic, and that can be applied with rigor in an engineering environment. That’s what we’re offering.”