HomeDesign SoftwareNot Your Father's WiFi Devices -- or Even Those a Decade Ago
Recent
Design Software
Using Low-Code/No-Code Systems for Manufacturing Quality
May 19, 2022
Los Angeles Fire Department Deploys Nation’s First Electric Fire Truck
May 19, 2022
Supplier News Looks at an Automated Coolant Management System
May 19, 2022
Is Magneto the Hero We Need to Destroy Blood Clots?
May 19, 2022
POLL
Using AI To Help the Deaf Communicate
May 19, 2022
Argo AI Expands Driverless Operation to Austin and Miami in Search of More Challenges
May 18, 2022
12 Ideas that Could Change the World
May 18, 2022
Making the AC Power Main Intelligent
May 18, 2022

Not Your Father's WiFi Devices -- or Even Those a Decade Ago

Microchip offers WiFi in an XBee-compatible plug-in module known as WiFly. ACKme calls its XBee-socketable WiFi module Hopper. Each module contains an embedded TCP/IP stack and serial interface, so putting them on the air is relatively simple. Apply power and connect the module's serial port to a terminal emulator, provide a bit of vital network configuration information, and you're in business.

Implementing embedded WiFi hasn't always been that straightforward. Back in 2004 the closest thing to embedded WiFi consisted of a raw 802.11b radio housed in a Compact Flash package. The word "embedded" was not in the WiFi CF card sales manual, as the card was intended for use in personal digital assistants and Linux-driven devices. I forced the WiFi CF card to become embedded by attaching its I/O pins to a microcontroller. To reach my goal of embedded WiFi via microcontroller, I depended on publicly available Linux drivers and a tenuous relationship with the 802.11b radio developers at Intersil. At the time, their PRISM radio system that resided within the CF card was treated as top secret.

After a month or so of wrangling with sketchy documentation, I produced my first microcontroller-based WiFi board (see photo). I called it AirDrop. The first AirDrop was powered by a Microchip PIC microcontroller. An Atmel version dubbed AirDropA (photo) followed closely behind the renamed PIC-hosted AirDropP. The TCP/IP stack that stood behind the AirDrops was a modified version of my home-brewed TCP/IP stack, which I wrote for the wired embedded Ethernet designs found in my first book, Networking and Internetworking with Microcontrollers. 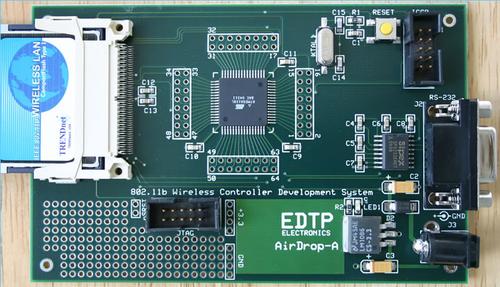 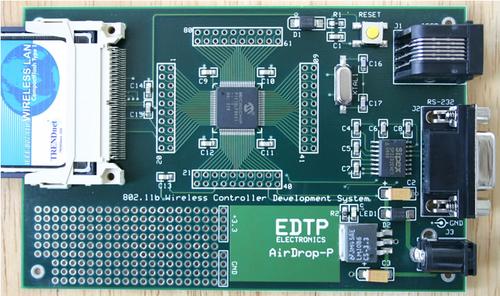 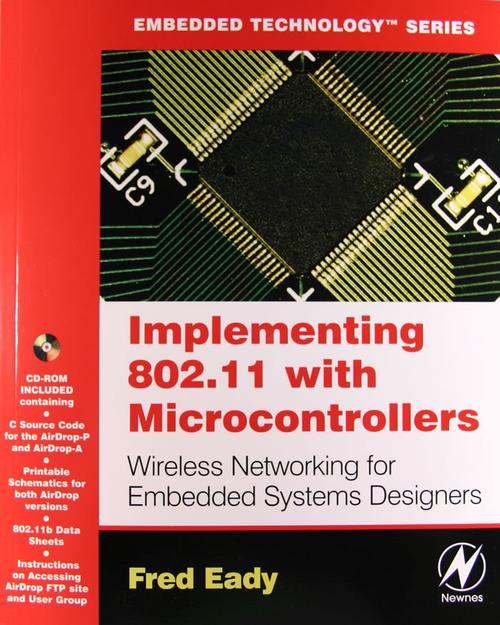 In 2005, I conveyed my AirDropA and AirDropP experiences in my second book, Implementing 802.11 with Microcontrollers (cover shown in Figure 1). The AirDropP took a trip to a Microchip MASTERS Conference lecture room in July 2006.

The age of the AirDrops came to a close in 2008. The PRISM-powered 802.11b CF WiFi cards became obsolete and began to disappear on the open market. One last rise from the ashes for the CF WiFi card came in 2009 with my WLAN Phoenix design (photo). It didn't take long for things to pick back up. In January 2010, Microchip acquired ZeroG Wireless, and in the following month, I designed and built the ZeroG PIC24FJ128GA006 Trainer (photo). For the first time, I was able to design and assemble a truly embedded 802.11b system. This was also the first time I took a wireless communications protocol lecture to MASTERS. A pair of ZeroG Trainers made the trip.