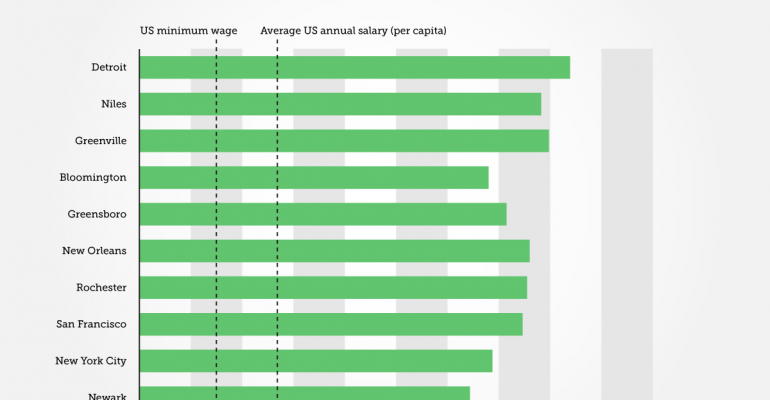 While it’s not surprising that Detroit ranks high as a great city for CAD designers, it's odd to see cities on the list like Greensboro, N.C., and New Orleans on the list.

Turns out Detroit is the best city for job prospects if you’re a CAD designer. In the creative industries, it can be hard to tell what geographic locations offer a decent standard of living as well as good of job prospects.

Motown topping the list for CAD designers isn’t too much of a shocker. “Detroit’s success can be directly attributed to the automobile industry,” Matthew Ripaldi, SVP at Modis, told Design News. “This has had a ripple effect on other cities across the state, namely Niles (which came in second) . If we just look at the concentration of jobs, then other places like Ann Arbor and Monroe are also above average when it comes to CAD design opportunities.”

The study results convinced Modis that things are looking bright for CAD designers, particularly in the cities that made it into the top ten. “It’s a good time to be a CAD designer. Over the next few years, we’re anticipating job creation above the national average in both the IT and engineering industries,” said Ripaldi. “Highly skilled talent like CAD designers are positioned to take advantage of competitive opportunities.”

The Logic Behind the Rankings

In creating the list, Modis looked at wage and location data from the Bureau of Labor Statistics (BLS) for designers, as well as looking at cost of living scores and state-level investment in technology. Modis also sourced an “occupational profile” for Commercial and Industrial Designers from the BLS. This profile featured average wage and location quotient data both nationally and for Metropolitan Statistical Areas (MSA).

Cities were ranked initially using their location quotient, which gives MSAs a score based on the concentration of a certain profession in that area, proportionally compared to the rest of the country. Initial location rankings were based on a weighted percentage that used the scale of location quotient scores from every featured MSA.

San Francisco was the only California city to make it into the top 10. The city would have ranked higher if it weren’t for the Bay Area’s high living costs. “San Francisco is no real surprise. California’s main industry export is computer and electronic product manufacturing, which contributes over $80 billion to the economy every year,” said Ripaldi. “A lower cost of living ratio in the state would likely improve its standing in CAD opportunities.”

Rochester in Upstate New York ranked unexpectedly high. The area was boosted in the rankings by the state investment in New York’s technology companies. “Rochester is part of the Tech Valley region of east New York State,” said Ripaldi. “There’s so much investment in optical and high tech imaging equipment, it seems like an obvious place for designers and companies to gravitate to.”

From a manufacturing point of view, it might seem surprising to see New York in the top 10. Turns out the Big Apple is home to the largest number of CAD users. Some of the Southern cities also seemed surprising. Turns out there’s sound logic behind the high rankings.

“New York City has the highest concentration of design firms in the country, so we can see some correlation there, but with other cities in our list, local industry is absolutely linked,” said Ripaldi. “Greensboro, N.C., for example, has the headquarters of a major aircraft manufacturer and a major truck manufacturer, as well as organizations like the North Carolina Technology Association pushing new tech business into the area. That means more opportunities for designers.”