Last year Optomec revealed the result of its America Makes project to combine its LENS metal additive manufacturing (AM) technology with CNC functions at the RAPID 2015 show in Long Beach, Calif. That project developed a low-cost LENS print engine that can be installed on most machine tools to form a hybrid system. 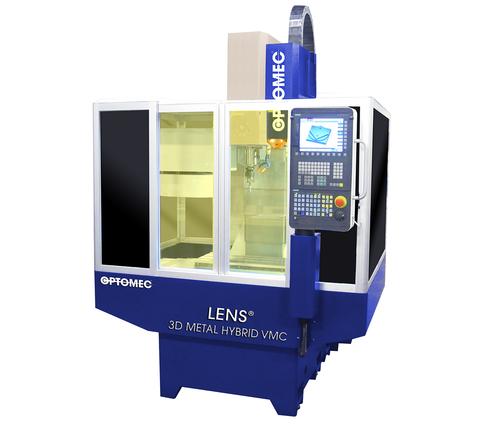 At the IMTS press conference, Optomec said the third machine, the LENS 3D Metal Hybrid VMC Inert System, is the first of its kind for metal working because it provides an atmosphere-controlled environment to extend hybrid manufacturing capabilities for reactive metals and aluminum. By replacing the CNC machine's upper enclosure with an Optomec proprietary hermetically sealed chamber and gas purification system, the 3D Metal Hybrid VMC Insert System can maintain oxygen and moisture levels under 40 ppm.

Its basic specs are the same as the second machine but with a 500W LENS print engine and the hermetically sealed chamber and gas purification system. A 15-inch antechamber lets operators move parts in and out of the system without breaking atmosphere. Pricing for this machine starts at $399,500. First customer shipments for all three will start in the first quarter of 2017.

Used for many years in military and aerospace applications for low-volume manufacturing and in-service product repair, the blown powder LENS metal AM technology in production-grade standalone 3D printers was originally developed by Sandia National Labs. Optomec's existing systems, such as the 850R for production and the 450 for education, are based on its own automation platforms. Forming a hybrid system by installing the relatively low-cost modular print engine on a machine tool can drastically reduce the amount of time it takes to machine parts -- as well as materials costs -- because printing and finishing can be done in one setup.

Like the America Makes project and other commercialization efforts, Optomec has said its goal in releasing the LENS Machine Tool Series is to speed up the use of metals AM in US industry, and broaden the use of production-grade metal additive manufacturing by making the technology more affordable and accessible. A second step announced at IMTS is the integration by Fraser Machine Systems of Optomec's LENS technology into its new LaserFab 3D hybrid VMCs (Vertical Machining Centers). Starting at $350,000, these machines cost less than half the price of comparable hybrid metal systems.

Standard features include a 1.5-second 24-tool ATC (Automatic Tool Changer), a 15,000 rpm inline spindle with a 30,000 rpm option, a high-torque 30 hp motor, a super-fast 1,900 IPM rapid feed rate, roller-type linear ways, and heavy-duty FEA-designed castings. The LaserFab can print and finish machine parts to a tolerance of only four microns.