IoT Is the Top Technology for Developers 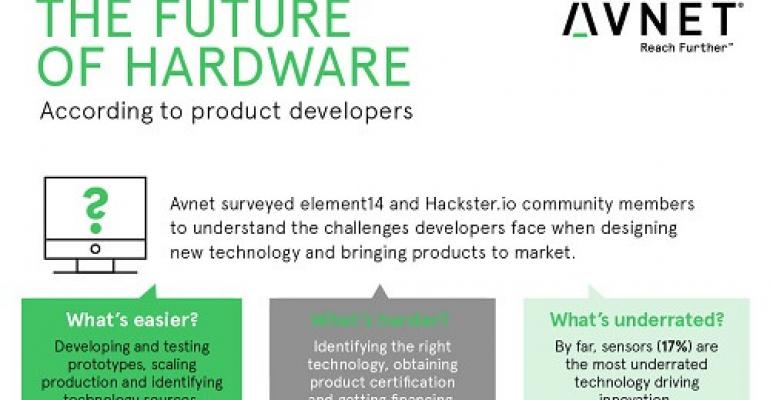 Of all the emerging technologies, product developers point to IoT as the most important, though security remains a challenge.

According to a survey of developers by Avnet, IoT is cited most often as the most improved and the most important technology. This is followed by sensor technology, which is an integral part of IoT. Avnet surveyed 1190 members of its Hackster.io and Element 14 communities to find out how they’re focusing their development efforts and what challenges they’ve faced over the past year.

Results from the survey include:

IoT technology was cited by respondents as the most significant growth in importance, up 14 percent from last year, followed closely by drones and robotics projects, which were up 8 percent. More than a quarter of developers (26 percent) also noted that IoT is also the most improved technology of the past year, followed closely by artificial intelligence at 25 percent.

Those at Avnet see a direct correlation between the rise in IoT technology and the rise in the use of sensors. “When you think about a connected device, it’s connected for a reason,” Bob Merriman, director of strategic planning at Avnet, told Design News. “Most frequently IoT data is acquired through a sensor, whether it’s sensing light or sound.”

Security Is Among the Top Issues

Developers believe that security remains the biggest technological hurdle in IoT deployment (81 percent). Time-to-market is also a great challenge, according to respondents. They say that cost is the biggest challenge once they move from design to manufacturing.

Developers have seen some improvements in these challenges over the past year. When asked what phase of product development has become easier, 58 percent pointed to developing and testing prototypes, which is up 17 percent from the year prior. Developers also found improvements in the process of identifying the best source for technologies (up 9 percent) and scaling production (up 16 percent).

The survey revealed a trend toward finding new partnerships and collaborations for development. More than a third of developers (37 percent) seek a partner to help them bring a product to market. “It’s a telling statistic. What we see is the product developers are using tech they have familiarity with,” said Merriman. “They find a comfort zone and then run into challenges or problems.”

As for seeking partnerships, this may be due to the complexity of IoT and the accompanying need for security. “A lot of the folks we engage with believe they need to go and find a partner for the specific technology, whether it’s the PCB or making the product right for manufacturability,” said Merriman. “Once they start to understand there are partners available, we see the light bulb moment.”

Much of the emerging IoT technology requires specific knowledge of how IoT works and what’s available in the IoT and sensor ecosystem. “What we’ve seen is typically developers turn to partners because of a lack of knowledge in what options and vendors are available. They get overwhelmed,” said Merriman. “They run into challenges when they see the full picture of what they’re up against, and they might not know the full ecosystem of what’s out there. “