Inside the HP Reverb: How HP Went All-In on Enterprise VR 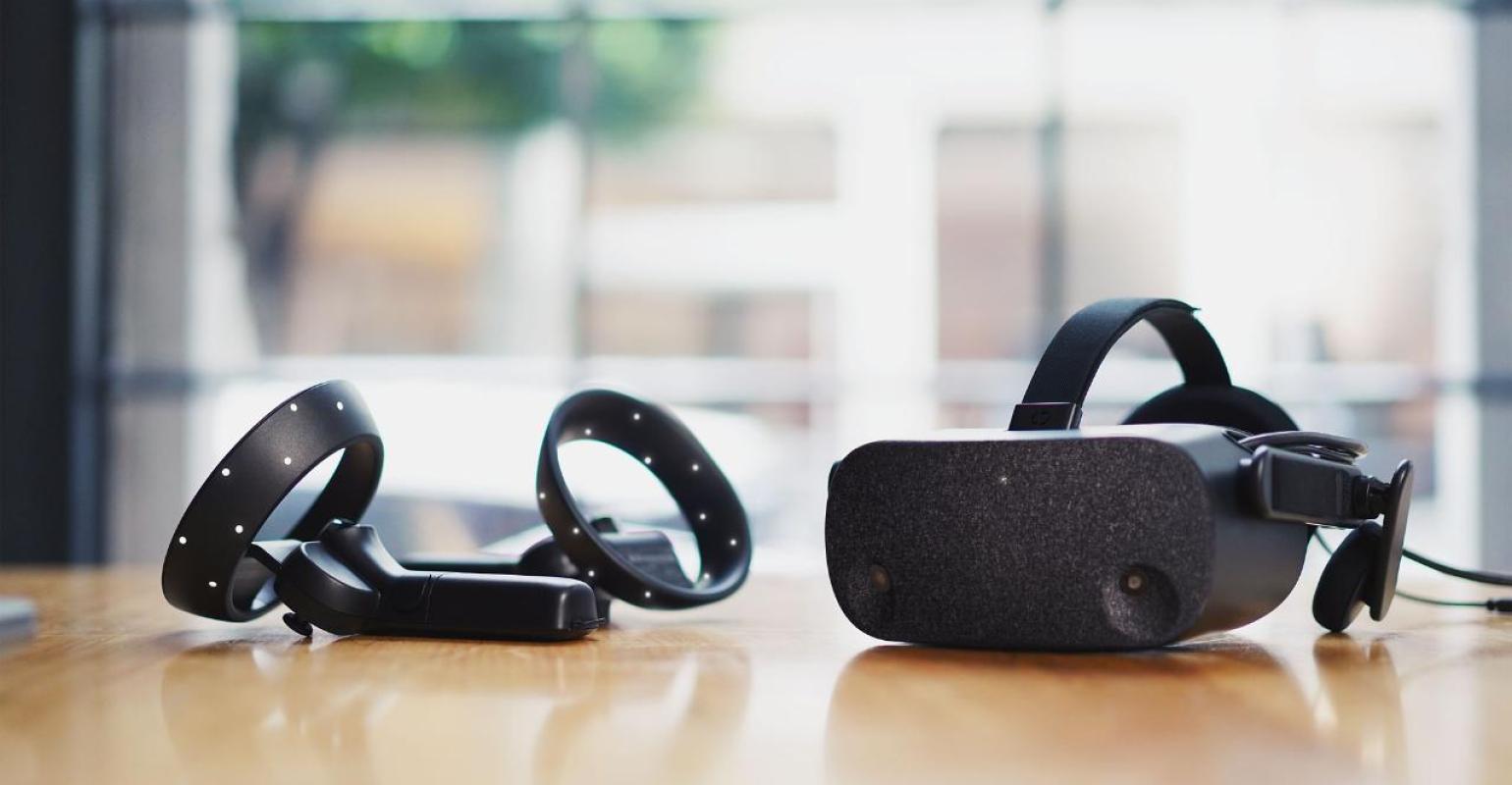 HP wants you to know its all-in on enterprise virtual reality.

Among the various names vying for a place in the enterprise VR market, HP has arguably been one of the most surprising. The company, traditionally known for its printer and PC products, has become a pillar in the VR hardware landscape in only a few years. In 2017 the company unveiled the HP Z VR Backpack, essentially a VR-ready PC in a backpack form factor targeted at enabling powerful VR experiences with greater freedom of movement. HP followed that up with its first VR headset as part of the Windows Mixed Reality ecosystem.

Now, HP has debuted the HP Reverb, a Windows Mixed Reality headset focused on the enterprise market. The headset offers significant upgrades from the previous model and doubles down on the company's commitment to the commercial VR market.

According to John Ludwig, Global Lead of VR Headsets at HP, “Back in 2017 what was a surprise to us at the time, but in retrospect quite obvious, is that HP has a large commercial enterprise business and those sales people start ringing our phones asking, 'How do we get our hands on that VR backpack and VR headset?' ”

That initial flood of interest led HP to create a division dedicated fully to VR for commercial and enterprise use cases. Where other companies were going strongly after the video game and entertainment markets – largely viewed as the greatest area of opportunity for VR, HP decided it was going to create products aimed at engineers and designers.

Those verticals have ranged from product design and architecture to training and healthcare applications. “Training has been huge for two reasons,” Ludwig told Design News. “One, it saves a lot of cost. You don't have to fly a person in to train by actually working a the physical engine, for example. You can do in VR for the first 30-40 hours and then do the finishing touches in the real world. The other thing is actually the retention rate has been quite impressive for VR-based training. Retention is about five to 10 percent for lectures or reading quiz afterwards. VR is about 80 percent.”

They Want Resolution and Comfort

HP's first generation of VR products garnered feedback from customers and communities that the company has used in creating its latest products, including the Reverb. “The simple feedback from the architecture, healthcare, and product design sectors was that they needed more resolution,” Ludwig said. “They need to be able see the details so they can make VR a tool they use more often.

“In training a big issue is actually text illegibility. A lot of training is still on documents, using multiple choice questions and things like that. And so the ability to read text very well or comfortably in current generation VR hurts their ability go from documentation to VR training.”

The other big piece of feedback HP got was in relation to comfort. Even casual VR users are familiar with issues of headset weight and overall comfort, particularly in applications like product design and training that can involve a lot of head movement. The equation is pretty simple, if you make a headset more comfortable, you give users the ability (and desire) to wear them for longer.

HP's first VR headset wasn't designed solely by the company. The base unit work was provided by Microsoft as part of its larger strategy to maintain a certain standard among the first Windows Mixed Reality headsets to roll out.

But Ludwig said HP knew if it was going to implement the feedback it had been receiving and meet expectations, the Reverb would have to be designed from the ground up.

Indeed the most notable specs for the Reverb come in the way of resolution and comfort. The headset boasts a 114-degree field-of-view with a 2160 x 2160-pixel resolution and a 90Hz refresh rate. Mathematically, that's nearly double the resolution of leading headsets such as the HTC Vive Pro, Oculus Rift, and Samsung Odyssey.

The headset itself weighs about 1.1 pounds. And while it is not a wireless headset (it uses DisplayPort 1.3 and USB 3.0), it does offer inside-out tracking, meaning it doesn't need external sensors (or “lighthouses”) to track the wearer's movement in space.

“We're utilizing the fact that you have two eyes to increase field of view and also boost clarity."

The Reverb comes packaged with wireless controllers (the standard Windows Mixed Reality controllers). However, because Bluetooth connectivity can sometimes be unreliable, HP's engineers have opted to implement a Bluetooth radio directly into the headset to avoid having to rely on the PC's Bluetooth and avoiding possible interference from other Bluetooth devices.

In our hands-on tests with the Reverb this Bluetooth implementation did cause some initial confusion with the Windows 10 setup, but after pairing the controllers directly through the OS rather than through the provided app, we found the controllers response to be very accurate and very low latency – even in gaming applications.

The high resolution is also immediately noticeable, provided you have a PC with the horsepower to handle the Reverb (HP recommends a setup with an Intel Core i7, Nvidia GTX 1080 graphics card, and 16GB of RAM at minimum). Even the Windows Mixed Reality Portal – essentially a virtual house that you can walk through to launch apps – takes on a whole new level of detail and clarity in the Reverb.

The comfort level will also be immediately noticeable to anyone who has tried other Mixed Reality headsets on the market. Thanks to some improved weight balancing and some other design decisions related to the optics, the Reverb offers a level of comfort rivaled only by the HTC Vive Pro, but at roughly half the weight.

In our own tests we logged a record amount of time using the Reverb both in enterprise demos and playing games (we ran the headset through its paces with enterprise demos provided by HP as well as by playing Robo Recall). It's a nice feeling to have to remove a VR headset simply because you're done with a task or actually want to take a break, as opposed to having neck strain or needing to stave off a headache.

The HP Reverb comes in two flavors: a consumer and professional edition. “We're commercially focused, but we also notice when the Venn diagram of consumer wants and commercial wants overlap enough,” Ludwig said. The base specs between the two versions are the same, but with slight differences. For example, the consumer variant comes with a machine washable cloth face mask, whereas the Pro version has a wipeable leather face mask for easier sanitation and use in multiuser environments. The Pro version also has a cord so that it can be connected to the HP Backpack, the latest version of which – the HP VR Backpack G2 – HP released to closely coincide with the release of the Reverb.

Coming to an Optical Conclusion

Ludwig said for HP's team of engineers the key to really delivering the resolution and visual quality that enterprise users demand is in the optics. “[With the Reverb] we're using LCD panels instead of OLED. HTC, Oculus, and Samsung, for example, all use OLED,” Ludwig explained. “The advantage there is we actually have an RGB subpixel stripe, so for each pixel we have a red, green, and blue subpixel – meaning each pixel can make any color. The result is we have two times the resolution, but we are actually more than twice as sharp.”

The other advantage the Reverb's LCDs offer is greater pixel density. “You can't really have a good panel with bad lenses, otherwise you get a bad experience,” Ludwig said. “Quite frankly the lenses aren't the best in the first generation mixed reality devices. The sweet spot is pretty small, which leads to a lot of moving your face around until the image looks clear. And it gets a little blurry near the edges, which isn't great.”

“The other advantage of our LCD panels is they are are much more pixel dense,” Ludwig added. “We use 2.89-inch panels versus the three-and-a-half-inch panels we find for OLED in the Vive, Samsung, and Oculus. So as we basically the headset ends up being a lot smaller and a lot lighter, which also leads directly to comfort.”

Adding only four degrees to the field of view over competing headsets (114-degrees versus 110) may not seem significant, but the difference is very noticeable in use. Aside from the larger view meaning less neck movement (another plus for comfort) it also lends to an overall improvement in clarity in virtual environments.

Ludwig said HP accomplished this by actually taking advantage of a bit of opticl trickery. “We found something interesting, which is that there tends to be an inverse relationship between your field of view and the clarity of the lens in a lot of cases with this kind of technology. So as you increase field of view the lens gets a little murky.

“So what we did is we moved from a symmetrical lens – where these are just circles with your eye in the very middle – to an asymmetrical lens, where your eyes are actually more inboard on the lenses,” Ludwig said. “They're not the same shape. What this lets us do is we've actually lowered the per eye field of view – so your monocular field of view has been lowered, which boosts the clarity of the lens up a bunch and increases the sweet spot of the optics by about 33 percent.”

“We don't want to just throw hardware at companies and tell them to figure it. That would be a classic mistake.”

Moving forward, Ludwig said HP wants to maintain a relationship with its customers and not just become a high-end VR hardware vendor. “What we find in the enterprise space is a lot companies are saying, 'Okay let's have our technologist make something [with VR] and see if it's actually reasonable.'In general they all find yes it is. But they're having difficulty going from that to implementing it company wide because that's a much different problem.”

To address this HP is making a support system available to its customers to help bridge the gap from making VR a nice-to-have into a regular, crucial part of workflows. “We've ramped up this support system alongside our products so that say a company comes to us in future and says, 'We have CAD or architecture files, but we don't know how to make the solution to take those into VR we can work with them to find a solution...We don't want to just throw hardware at companies and tell them to figure it. That would be a classic mistake.”