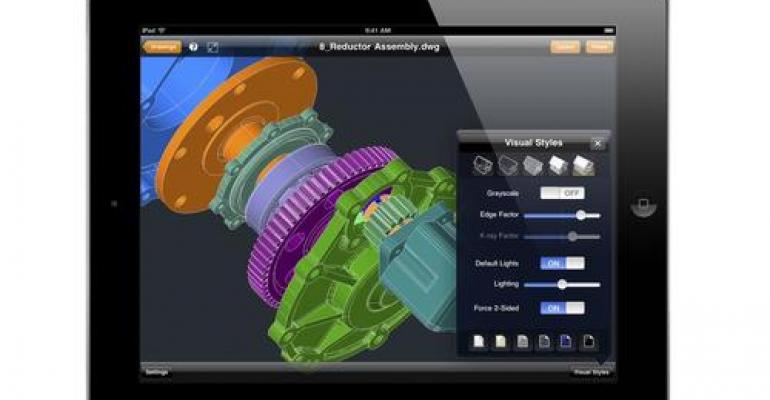 A little more than a month after releasing a free viewing app for the iPhone and iPad, IMSI/Design launched a more powerful for-pay version that it says will be the first in a long line of design apps built specifically for mobile platforms.

Unlike some design tool players that have shaved off some portion of their functionality and put it on smartphones or tablets to test the waters with engineering customers, IMSI/Design says it's serious about mobile design. It also says it is putting serious development resources toward making this segment a strategic part of its product portfolio.

Cochran says apps that facilitate field work such as design reviews, walk throughs, even customer presentations of products under development are a natural fit for the mobile platform, especially when they exploit some of the special capabilities of tablets. IMSI/Design plans to build a series of design apps that can leverage the 10-hour battery life, built-in GPS functionality, and accelerometers found in most mobile devices.

Making a tablet or another mobile device an engineer's platform of choice for heavy CAD work isn't part of the IMSI/Design vision. The memory constraints of tablets (which currently max out at around 512K bytes) present a ceiling reminiscent of the days in the PC world when there was a memory barrier of 640K bytes, Cochran said. "Desktop CAD does not lend itself to mobile. Design apps today would run out of memory, and most engineers want to work with CAD with a full-size keyboard, a mouse, and a 24-inch monitor. That's what's ideal for CAD."

On the other hand, Cochran sees plenty of opportunity. IMSI/Design's initial tablet app, the free TurboViewer, has done well since its release, he says, though he won't furnish specific download numbers. That version, which enabled viewing of native 3D and 2D wireframes, has been expanded with the new TurboViewer Pro, a professional-grade viewing app that supports 2D and 3D DWG files with additional capabilities, including hidden lines, X-rays, shading, grayscale mode, and the ability to adjust the edge color range and X-ray transparencies.

The app, offered at the Apple App Store at an introductory price of $9.99, lets users pan, zoom, and 3D orbit around DWG files. To view files, users simply send an email with the DWG or DXF file attached to their iPad or iPhone email client.

One of the things IMSI/Design is touting with TurboViewer Pro and subsequent design apps is the fact that they're written from scratch for Apple iOS and Android. Cochran says the firm has spent a lot of time optimizing memory so the apps will run efficiently, despite the memory limitations of mobile platforms. "We have to grab DWG info and convert it to OpenGL to display on the mobile device. There's a pretty significant effort to do the conversion process, and we've spent a lot of time optimizing."

IMSI/Design plans a follow-on family of Turbo Apps, including a more advanced design review product that will let users mark up images and take notes. "Today, design professionals cobble together a digital camera, a clipboard, and a red pen. If we can put all of that functionality and automate some of the processes with a tablet, that's the best way to have it done."