How VRgineers Built a VR Headset With Engineers in Mind 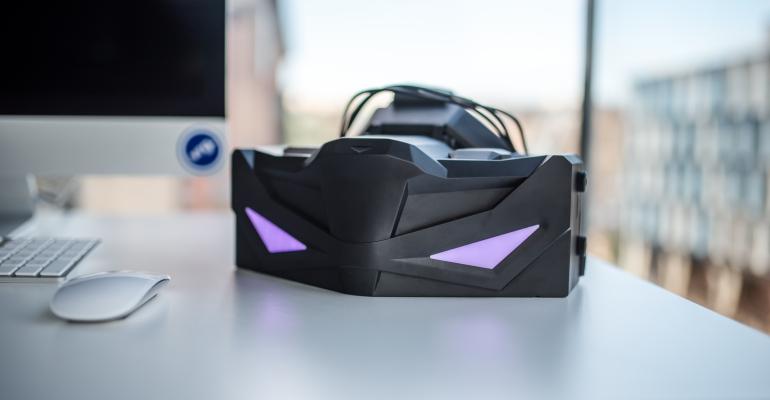 VRgineers is taking a different approach to virtual reality with the VRHero, a VR headset designed specifically with engineers in mind, complete with 5K resolution and hand motion tracking controls.

As more hardware products enter the virtual reality space, the push for more enterprise applications has grown with it. Companies tout VR for its uses in virtual prototyping, design, training, and even artificial intelligence—all with the aim of enticing design engineers into adopting VR into their workflow.

Yet no company has really advertised its products as putting the needs and wants of engineers before everything else.

Enter VRgineers. The Prague-based VR hardware startup is jumping into the VR headset space with a heads-mounted display (HMD) aimed specifically at enterprise users like engineers and designers.

“Our clients aren't looking for a toy, they're looking for a solution,” Marek Polcak, co-founder and CEO of VRgineers, told Design News, emphasizing the company motto, “We play no games.”

Ironically, the specs on the company's flagship headset, the VRHero 5K Plus, would turn the heads of most VR gaming enthusiasts. The helmet boasts 5K resolution (2560 x 1440 per eye), a 150- to 170-degree field of view (depending on adjustable settings), and a 70 Hz refresh rate. On the enterprise side, this more than competes with the latest offerings, such as the HTC Vive Pro, for example, which offers 2880 x 1600-pixel resolution (1440 x 1600 pixels per eye), a 110-degree field of view, and 90 Hz refresh rate.

But Polcak said the VRHero's goal isn't to entertain. It's to provide engineers with the best fidelity and image quality possible for the level of detail needed in automotive, aerospace, robotics, and even medical applications.

“It's important to understand that retail devices are focusing on entertaining you and playing with your senses,” Polcak said. “They want to send you as many impressions as possible as fast as possible and as intensely as possible. But for [enterprise] work, what you need to do is get as close to reality as possible in a quiet place. When you are observing one part of a car for half an hour, you don't need to see zombies around you or be disturbed by loud music.”

For Martin Holecko, a fellow co-founder of VRgineers, the company's strategy is a reversal of that typically employed by VR hardware companies. “Normally with VR, you're trying to bring someone into a fantasy world. But for us, the end point is enabling engineers to create a product in the real world...We are starting in VR, but the end goal is reality. Retail is the other way around, even though there are small differences—our picture is crisper, more precise, and we can scale object sizes to match the real world. If you connect all of these things, you have a new type of product.”

Polcak, Holecko, and a third partner, Vaclav Bittner, started working together to create a VR headset five years ago. Polcak, who holds degrees in electrical engineering and cybernetics from Czech Technical University in Prague, said he wasn't satisfied with the image quality of headsets on the market at the time. “I wanted to make a headset that would fulfill the promise of how we all want VR to work,” he said.

The team started working with automotive engineers and architects and were able to iterate prototypes of the VRHero based on their feedback. Holecko said several auto OEMs, including Audi, BMW, and Volkswagen, signed on to test early units of the headset.

“From the beginning, image quality was the focus point. So there was no compromise on that, even though this is the first generation of the device,” Holecko said.

“Durability was our number two concern,” Polcak said, adding that they knew the headset would need to be robust to survive the demands of engineers and also comfortable enough to be worn over long periods of time. “You want something that works, but also feels good.”

Size and weight play an important factor in the comfort level of VR headsets, and specs on headset weight are hard to come by. Estimates put the HTC Vive and Oculus Rift at less than a pound each at 555 and 470 grams, respectively, and even those models will wear on your face and neck rather quickly. While VRgineers has not released specs on its headset's weight, despite its bulky frame (4.97 x 2.8 inches), the VRHero 5K Plus doesn't feel any heavier than either the Vive or Rift. In a hands-on demo at the recent Nvidia GTC Conference, the headset felt very comfortable (even while wearing prescription glasses), thanks to a well-cushioned area around the lenses. The fact that applications demoed at the show require less rapid head movement than gaming applications probably also lends to the overall comfort factor. One demo, for example, was touring a home in the process of being designed.

The Importance of Integration

The VRHero 5K Plus offers no inside-out tracking, but does offer six degree-of-freedom (6DoF) tracking via external sensors, much like the Vive and Rift models on the market today. This means it can track your head and body position and movement within a confined space designated by the sensors.

Where the VRHero could score big points with enterprise users is that the headset is hardware agnostic. Rather than locking users into its own ecosystem of external trackers and controllers, VRgineers designed the VRHero to function with third-party sensors as well as controllers, such as the HTC Vive controller.

“Integration is super important because it's not just about the device, but the full software stack on top of or around the device,” Holecko said. “What we really want to provide is smooth integration into a client's working environment. We don't want them to have to rebuild their whole lab because they bought one device.” On the hardware end, he explained that this means allowing use of third-party options. On the software level, it means providing SDKs for graphics engines, such as Unity and UnReal, as well as integration with CAD tools like Autodesk. “What you want to do is spend as little time between your regular workflow and VR. You don't want to spend time having to optimize your content for VR,” Holecko said.

A 'Leap' Forward in Control

To that end of easy control and integration, what most sets the VRHero apart is that VRgineers has utilized the Leap Motion sensor in the headset. Leap Motions' sensor uses infrared to track users' hand movements with an up to 180-degree field of view and at an accuracy that can track individual finger movements. Essentially, this allows wearers to use their hands as a controller. Want to pick up and move an object in VR? Simply grab it and manipulate it as you would in the real world. In our hands-on demo, this feature functioned very smoothly with very low latency.

Polcak said this type of control scheme was always part of the team's vision in developing the VRHero.

"I always had the vision of using hand tracking," he said. “We aren't professionals in that field, so we knew we should team up with a partner.” Because the most natural thing is using our own hands, he said partnering with Leap Motion immediately made sense. “VR should be getting us back to how we are used to working,” he noted. “The keyboard is not a natural interface; a 2D screen is not a natural interface; using your hands in VR is."

Even though a controller enables you to do more tasks because you can have mapped buttons, having fewer functions with your hands actually allows you do to more in the space because it's natural. Older people and even children can instantly start doing something because you are used to using your hands.”

Holecko said there is a possibility down the road of using special tools like a stylus or some other handheld tool when necessary to mimic real world training and work. “But why add complexity if you don't need to?” he said. “Any tasks you can do with your hands you should be able to do in VR.”

With next-generation headsets coming soon—many promising wireless functionality and full 6DoF inside-out tracking—the team at VRgineers feels determined that image quality and fidelity will be what attracts enterprise users more than the wireless freedom of movement promised by these next-gen products.

“Our goal is to be the first to deliver a solution where you won't be able to tell what's real or not when you turn it off,” Polcak said. “That's not a reality yet...but we're getting there.” He admits, though, that the VR ecosystem is a complex one with a lot of moving parts that need to be advanced in conjunction with one another to provide the best user experience possible. “You have to raise the quality of displays and the chips that operate the displays, that's one part. Then you have to raise cables and protocols to transfer the data. Then you have to raise the GPUs...”

“All of those things have to be in balance,” Holecko added. “If there's one weak part, it drags the whole system down. People ask us about things like 8K resolution and wireless capability and we say, 'Yes, of course.' But to have a functioning system that you can use today, you have to have the whole thing in balance.”

For now, Holecko said, the company will continue to concentrate on its core mission and expertise. “Building a high-resolution, wide field of view headset and making it as small as possible are two things that go against each other,” Holecko stated. “The magic trick is in the optics, which is one speciality of ours.” He said VRgineers is crafting lenses for its headsets through a joint venture with some lens specialists that will be more compact and offer even better image quality.

“If the headset is half the size, but image quality goes down even one percent, it's a no go for us,” Polcak said.

5 Major Challenges for VR to Overcome