How to Prove a Star Wars Theory with Finite Element Analysis 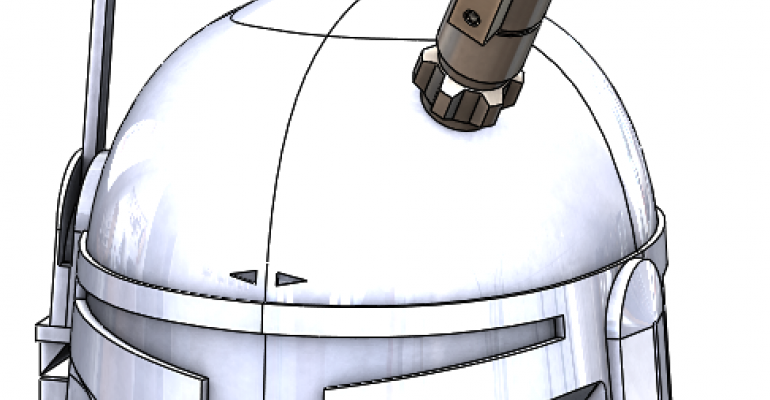 Any new Star Wars movie or TV show will always cause diehard fans to revisit some of their favorite theories about the franchise. With the release of Rogue One: A Star Wars Story only weeks away, we visit a question that has baffled engineers and Star Wars fans for decades – the origin of the mysterious dent in Boba Fett's helmet.

Any new Star Wars movie or TV show will always cause diehard fans to revisit some of their favorite theories about the franchise. With the release of Rogue One: A Star Wars Story only weeks away, we visit a question that has baffled engineers and Star Wars fans for decades – the origin of the mysterious dent in Boba Fett's helmet. 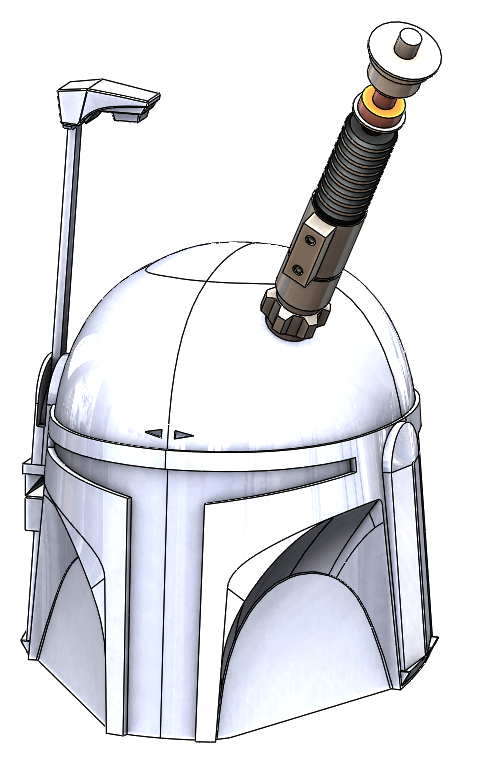 Boba Fett takes the iconic father from his father, Jango, after Jango's death in Attack of the Clones. When we see the helmet again (or for the first time depending on the order you first watched the saga in) in theThe Empire Strikes Back, Jango’s dents have been replaced by new battle scars, most notably a circular shaped indentation on the right front of Boba Fett’s temple.

CGI errors leave us no answer to how the dent got there, but fans have a few theories: It could have been caused by a door on Slave 1, the ship’s crash, or a particularly vicious head-butt.

I have my own favorite theory. If you look at the end it's about the size of the base of a lightsaber. Did Boba's helmet get dented in a fight against a Jedi?

Proving My Theory with 3D CAD

How could I find the answer to what caused the dent?

I quickly realized that I don’t have any Mandalorian armor lying around, nor a means to get any. Though, when physical testing can’t be done, there is always Finite Element Analysis (FEA).

My weapon of choice: SOLIDWORKS Simulation – using the highest-level package to smack Boba Fett’s helmet with as many objects as possible. A nonlinear analysis gave accurate results after the helmet yielded, while also allowing for movement of objects through time.

There are four or five main things any finite element analysis requires to run. For this project I needed materials, restraints, loads, and mesh. Simulation automatically chooses the best analytical theory for me, so I didn’t have to worry about that.

Though I lacked material properties for Mandalorian armor, I did know that Jango Fett’s armor was mostly made out of Durasteel (which is also used to manufacture starships in the Star Wars universe), so I used an approximation of lightweight and strong steel. Also, I believe a sturdy lightsaber would yield far after the thin helmet buckled, so I defined the lightsaber as perfectly “rigid.”

Software doesn’t assume the real life physics that take place around objects. I expected the helmet would remain sturdy on Boba Fett’s shoulders, so I used a totally fixed restraint on the bottom of the helmet. To prevent solver instability and speed the calculation I prevented rotation on the cylindrical faces of the lightsaber.

Load, Mesh, and a Little Trick

So, to get the lightsaber motion, I replaced the force with a prescribed displacement—telling the saber to move down half an inch and see how this affected the helmet.

This had the added benefit of stabilizing my calculation further, so all I had to do was throw in a mesh control for accuracy. 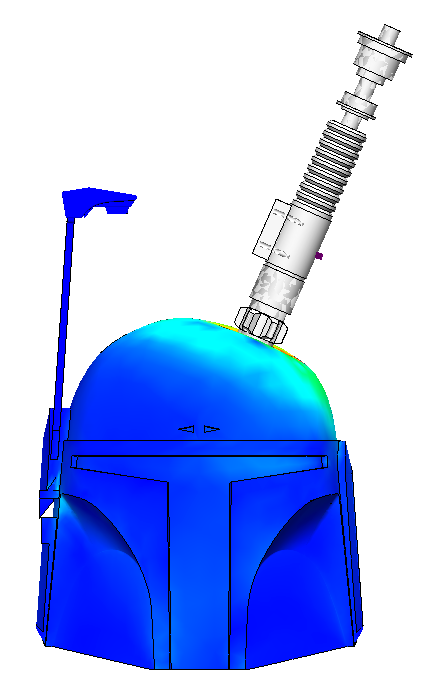 I had my dent! Those results look pretty sweet. Not as sweet as the revenge Boba Fett craves, but certainly sugary enough to satisfy my sweet tooth.

What Do You Think Caused the Dent?

Are you ready to start proving your Star Wars fan theories using analysis software? I’d love to know what you think.

Looking for more? Get the 3D CAD files for the helmet and lightsaber here.

Shivani Patel has her BS in Aerospace Engineering and has six years of CAD experience. She has been with GoEngineer for over 2 years working as an expert-level SOLIDWORKS and Simulation instructor and is a certified expert in SOLIDWORKS, and its FEA, CFD, and Injection Molding packages.