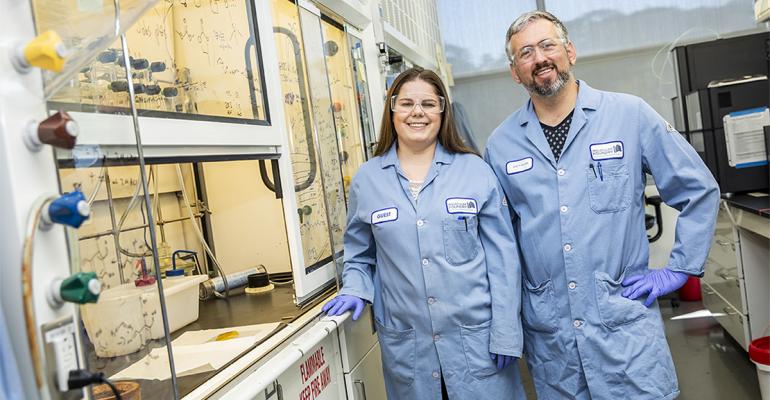 A new flow-battery membrane made from novel materials could drive the cost down for storage for renewables for long-term use.

Researchers at the Department of Energy (DoE) have developed new technology that paves the way for affordable large-scale grid storage for renewable energy by tapping an aqueous technology for a new battery membrane.

A team at the DoE’s Lawrence Berkeley National Laboratory (Berkeley Lab) have developed a novel flow-battery membrane made from a class of polymers known as AquaPIMs—which stands for “aqueous-compatible polymers of intrinsic microporosity.” The membrane is comprised of readily available materials such as zinc, iron, and water, which drives down its cost as well as has other benefits.

This new technology can be the basis for liquid-based flow batteries, which researchers already have proven effective for the large-scale storage that renewable energy like solar demands, noted Brett Helms, a principal investigator in the Joint Center for Energy Storage Research (JCESR) at Berkeley Lab. Helms, also staff scientist at Berkeley Lab’s Molecular Foundry, led the study.

“By using our technology and accompanying empirical models for battery performance and lifetime, other researchers will be able to quickly evaluate the readiness of each component that goes into the battery, from the membrane to the charge-storing materials,” he said. “This should save time and resources for researchers and product developers alike.”

The ability to store renewable energy even when the sun isn’t shining or there is no wind has been one stumbling block to using this type of energy as part of the electrical grid. Solving this problem will not only help remove that barrier, but also allow people to use this type of energy in homes for a much longer lifecycle of 10 to 20 years.

Key to the membrane developed at the DoE is that AquaPIMs is a high-performing yet less expensive alternative to the fluorinated polymer membranes currently used in large flow battery chemistries. This technology currently comprises about 15 percent to 20 percent of the battery’s cost, which makes it expensive for widespread use.

The DoE team discovered the AquaPIM technology while developing polymer membranes for aqueous alkaline batteries in collaboration with researchers at MIT, they said. AquaPIM materials are unique in that they become ionized at high pH, yielding pores that are highly conductive and highly selective. The material also can be molded into a variety of shapes.

Scientists learned a number of things through their early experiments with the AquaPIM materials that it could be well-suited to develop membranes for flow batteries.

One thing they learned is that if they created AquaPIM members and modified them with a chemical called an “amidoxime,” ions could rapidly travel between the anode and cathode. Later, while evaluating AquaPIM membrane performance and compatibility with different grid battery chemistries, they also discovered that AquaPIM membranes lead to remarkably stable alkaline cells.

Researchers found that AquaPIM prototypes retained the integrity of the charge-storing materials in the cathode as well as in the anode, which also was promising for the type of storage needed for renewables.

Eventually, the team tested how an AquaPIM membrane would perform with an aqueous alkaline electrolyte, discovering that polymer-bound amidoximes are stable under alkaline conditions. Researchers found this result surprising given that organic materials are not typically stable at high pH.

This stability also prevented the AquaPIM membrane pores from collapsing, researchers said. This allows for conductivity without performance loss over time, another quality that is conducive for long-term renewable energy storage.

The team used computational resources at Berkeley Lab’s National Energy Research Scientific Computing Center (NERSC) to test the chemical structure of the membrane. In tests, they found that the structure of the polymers comprising the membrane were significantly resistant to pore collapse under highly basic conditions in alkaline electrolytes.

The team also managed to develop a model tying battery performance to the performance of various membranes while testing membrane performance and compatibility with different grid battery chemistries, they said. This model can be used during the development of flow batteries to predict the lifetime and efficiency of the device without having to do a complete build, which can save significant time and resources, Helms said.

“Typically, you’d have to wait weeks if not months to figure out how long a battery will last after assembling the entire cell,” he said. “By using a simple and quick membrane screen, you could cut that down to a few hours or days.” This computational research and testing also demonstrated that similar models could be applied to other battery chemistries and their membranes.

The next step for the research is to apply AquaPIM membranes across a broader scope of aqueous flow battery chemistries--from metals and inorganics to organics and polymers, researchers said. They also will test the compatibility of the membranes with other aqueous alkaline zinc batteries, such as those that use either oxygen, manganese oxide, or metal-organic frameworks as the cathode.