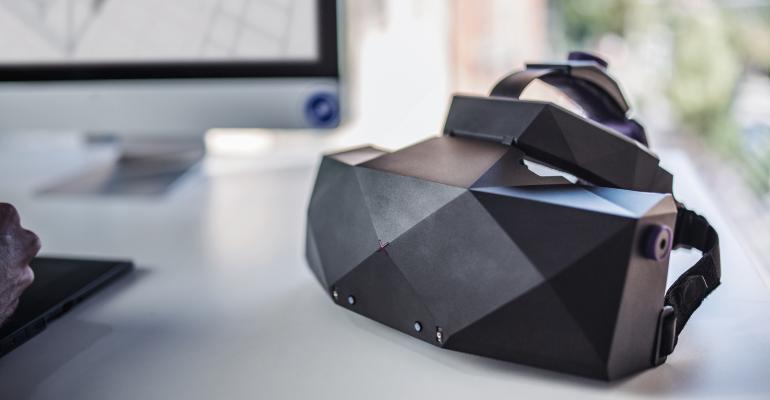 <p><strong>VRgineers</strong></p><p>There are many VR headset makers on the market, but very few are creating devices specifically aimed at professionals like engineers and product designers. But Prague-based <a href="https://www.designnews.com/design-hardware-software/how-vrgineers-built-vr-headset-engineers-mind/32092855858722" target="_blank">VRgineers</a> does just that. In the 2018 the company released the VR Hero 5K – a powerful headset with a whopping 5K video resolution (that's 2.5K per eye). The company soon followed that up with the <a href="https://www.designnews.com/design-hardware-software/hands-on-vrgineers-xtal-headset-enhancing-vr-engineers/72049831959273" target="_blank">XTAL</a> (shown above), another 5K headset that added a slew of additional features including eye tracking and an integrated <a href="https://www.designnews.com/electronics-test/together-ultrahaptics-and-leap-motion-could-transform-how-we-interact-devices/185843630860969" target="_blank">Leap Motion</a> sensor for tracking hand movement without the need of any external controllers or sensors. The company's headsets are spec'd and priced at a level targeted at large organizations, where VRgineers is aiming to become a go-to supplier for VR headsets for training, product development, and other engineering applications.</p><p><em>(Image source: VRgineers)</em></p>
Prague-based VR hardware startup VRgineers is now shipping the latest version of its enterprise-focused VR headset with enhanced imagery and a slew of features targeting design engineers.

Company CEO Marek Polcak had always stressed that the company has placed image quality and fidelity as paramount, to the extent that VRgineers has created its own proprietary lenses with the help of a third-party manufacturer. Polcak remains mostly secretive on this working relationship, but the name of the new headset, XTAL, is short for “crystal.” The name refers to Polcak's obsession with crystal-clear imagery as well as to the lenses featured in the headset, which flaunt a new, crystal-like polygonal structure. The lenses' country of origin is known for the ancient craft of making Bohemian crystal glass, according to Polcak.

Design News had an opportunity to get a hands-on demonstration of the XTAL headset at the company's offices in Los Angeles and found it to be a significant improvement over the previous model, the VRHero 5K—particularly in terms of resolution, image quality, and weight. (Specs would indicate that the XTAL weighs more than the VR Hero, so this is likely due to improved counterbalancing.) The 5K resolution (about 2.5K per eye), 150 to 170-degree field of view, and 70Hz refresh rate of the VRHero 5K are still there. But in the XTAL, all of this is assisted by a new, proprietary feature called AutoEye. Using internal infrared sensors to track the wearer's eyes, XTAL automatically adjusts its lenses to the wearer's interpupillary distance. This, combined with new focus adjustment knobs, creates a sharp viewing experience that even allows users with corrective lenses to forgo their glasses to enjoy the headset. (I've personally found wearing glasses to be a particular annoyance with many VR headsets.)

According to VRgineers, the AutoEye functionality is also open to developers who want to utilize it for functions such as retina detection or eye movement tracking. Doing this allows for eye-tracking-based control schemes as well as graphic features like foveated rendering (i.e., rendering images most clearly at the center of the eye to more closely mimic real-world human vision). This is especially important in enterprise applications such as medical diagnostics and training.

When we demoed the VRHero 5K earlier this year, it featured the Leap Motion hand-tracking sensor as an external peripheral. With the XTAL, the Leap Motion sensor has now been fully integrated into the headset and offers improved tracking over the previous version of the sensor. Although the software has some issues with tracking the interlocking or inter-positioning of your hands and fingers, the sensor is still highly accurate. It can track individual finger movements with ultra-low latency. Other controllers options—keyboard, mouse, joystick, HTC Vive controller, etc.—are compatible with the XTAL. But Polcak stressed that the hands-only Leap Motion controller, combined with new voice command recognition, provides the preferred methods for giving engineers a natural virtual experience with a low learning curve.

No next-generation VR headset has any business on the market without inside-out tracking to eliminate the need for external sensors. While our demo didn't include the inside-out tracking features, VRgineers said the XTAL is tracking agnostic and is capable of six degrees-of-freedom (6 DoF) inside-out tracking. For complex industrial use cases, the company said the XTAL can currently be combined with third-party, enterprise-grade tracking hardware including AR Tracking, Optitrack, the SteamVR Lighthouse 2.0, Mo-Sys, and Vicon. Those options can be attached as external clip ons to the XTAL to enable 6 DoF tracking. VRgineers is also planning a future software upgrade that will allow for full 6 DoF, inside-out tracking in the headset itself.

VRgineers has currently partnered with several companies that are using its headsets for design evaluation, virtual prototyping, product development, and other pilot programs. The company currently cites Audi, BMW, and Volkswagen among the automakers that have implemented its headsets into their design engineering workflow. The headset is compatible with several enterprise-grade design software suites including SteamVR (OpenVR), Autodesk VRED, ESI IC.IDO, and design software solutions from Dassault Systèmes.

Going forward, Polcak said the company has its eyes on applying the XTAL beyond VR and into extended reality (XR) as well. No official release date has been announced, but the company plans to introduce a front-facing camera module attachment to the XTAL that will allow for XR and mixed reality (MR) functionality. The XTAL will then be able to detect its external environment to overlay interactive, virtual objects onto the real world and to manipulate real-world objects virtually.