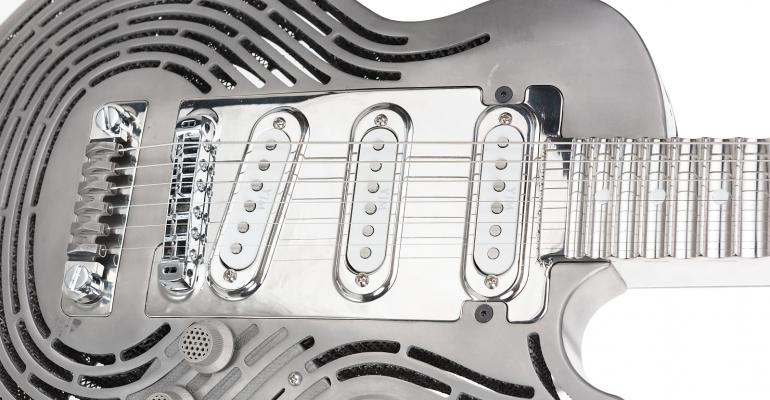 Sandvik engineers set out to create a smash-proof item that played like a true precision instrument while demonstrating Sandvik’s expertise. The company picked a choosy musician to demonstrate the guitar.

Guitar virtuoso Yngwie Malmsteen remembers the first time he felt the urge to smash a guitar.

“I got my first guitar when I was five years old,” he said. “When I was seven, I saw Jimi Hendrix smashing a guitar on TV. So, I decided to start playing guitar so I can smash it. I’ve probably smashed over 100 guitars.”

Malmsteen’s legions of fans have come to expect the heavy-metal guitar trashing. In truth, traditionally manufactured guitars are not all that difficult to smash. This led Swedish engineering group Sandvik to challenge themselves to design and manufacture a guitar that had excellent sound quality as well as indestructability. In short, a guitar that even Malmsteen couldn’t smash.

“We didn´t just want to create a smash-proof item: it should also be something that fulfilled the purpose of the item – in this case a guitar, which is a true precision instrument,” Martin Blomgren, press and media relations manager for Sandvik, told Design News. “That was very important to us since we wanted to showcase and demonstrate what we are able to do with our combined expertise at Sandvik.”

Since designing guitars isn’t something Sandvik normally does, the company partnered with renowned British guitar builders, Drewman Guitars, for the design. Once the design was in hand, Sandvik used a combination of techniques to build it. The body of the guitar was 3D printed by Sandvik Additive Manufacturing using titanium powder to make it light and strong. The neck and fretboard were machined by Sandvik Coromant tools from a solid block of recycled stainless steel. A latticework piece made from hyper-duplex steel was sandwiched between the neck and fretboard to provide extra strength.

“Every element had to be drawn from scratch,” said Blomgren. “The fretboard proved to be the biggest challenge, since it had to be strong but thin. The fretboard was machined from a block of stainless steel and the scalloped fretboard that Yngwie uses made it a challenge – it needed to be very thin in some parts.”

Sandvik engineers didn’t just set out to create a smash-proof item, they wanted something that also played like a true precision instrument and demonstrated Sandvik’s expertise. The company picked a choosy musician to demonstrate the guitar. Malmsteen has complex personal preferences for guitar design, and he’s well known for customizing guitars to fit his personal taste.

“Malmsteen visited us in Sandviken [a town 118  miles north of Stockholm] during the manufacturing and planning process,” Blomgren told Design News. “He is a demanding perfectionist, which made him a perfect fit for this project.”

Using the Advantages of Additive Manufacturing

What makes this guitar stand out from traditionally manufactured instruments is the lack of a joint between the neck and body of the guitar. This joint tends to create the weak spot that enables Malmsteen and other famous guitar smashers (the Who’s Pete Townshend comes to mind) to break the instruments without a great deal of effort. Sandvik’s guitar's neck and fretboard were milled in one machine from solid bars of recycled stainless steel, making it stronger than a typical guitar.

Printing the body of the guitar alone took 56 hours. The guitar’s volume knobs and tailpiece, which anchors the strings, were also created with 3D printing. Each layer was 50 microns thick (thinner than a human hair). One of the biggest design challenges was finding the right ratio between strength and weight. The use of titanium and the structure of the 3D printed body, together with the latticework that was sandwiched between the neck and fretboard, were two important ways of keeping the weight down and at the same time making the instrument strong enough to resist smashing.

Additive manufacturing allowed the components to be lighter, stronger and more flexible than traditional manufacturing methods and enabled previously impossible designs. The result was a guitar that was much lighter than it would have been if it had been created via traditional methods to resist smashing.

“This was an important part of testing it in every way that we had seen Yngwie smashing guitars on YouTube,” said Blomgren.

When the guitar was complete, it was time for the ultimate test. Malmsteen played the guitar at a show at the Revolution Rock Club in Miami, Florida. After several songs, he began to swing the guitar at amps, stage structures and the floor, doing his very best to smash it. The guitar suffered only a few surface scratches.

“I gave it everything I had, but it was impossible to smash,” said Malmsteen. “To break it is impossible.” But he added, “You can break other things with it.”

The guitar, signed by Malmsteen, recently sold at auction for $28,500. The funds were donated to charity organization Engineers Without Borders Sweden.