The Dearth of Women in Sciences? Let’s Keep Talking About It! 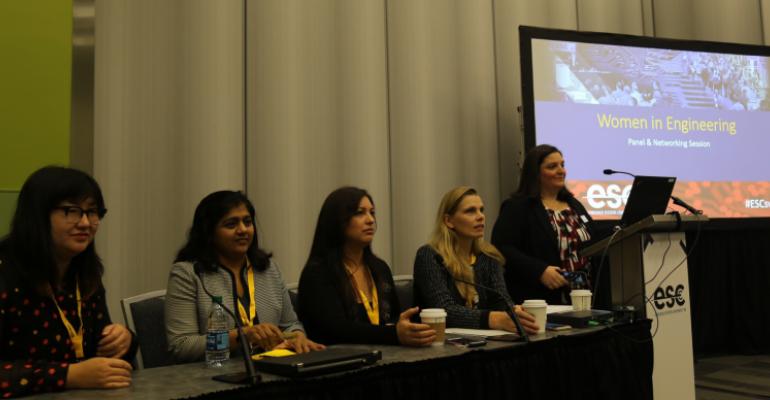 With women accounting for just 12% of engineers in the US, gender equality has become a burgeoning topic in tech. So much so, in fact, that a Women in Engineering panel at 7:30 a.m. on the second day of the Embedded Systems Conference, was to a full room.

“As a society we’re doing something wrong here. It’s just not right,” said panelist Alpana Kaulgud , a senior director of Architecture at ARM. Women are simply not graduating in high enough numbers from engineering school, “and of the percentage that actually graduate and join an organization that is very male heavy, over time, either because of other priorities, or feeling isolated, or some mismatch, women do drop out,” explained Kaulgud, adding that the problem is a two-pronged one; how to get more women to graduate with an engineering degree and how to get them to stay in engineering.

Jessica Gomez, founder & CEO of Rogue Valley Microdevices said women’s underrepresentation in engineering is a multifaceted problem which often starts when girls are very young, but also has to do with how women think and feel about work. “We want to do something important. We want to do something that contributes to the world around us, for our community, something that’s creative. Oftentimes, engineering just doesn’t present itself in that way,” she said, noting that it is mainly an awareness issue. “Sometimes it’s hard for girls to make that leap to see engineering as being able to do really important things in the world, like in world health issues or the environment, and make a substantial amount of money doing it, too.”

Heather Andrus, general manager at Radius Innovation Studio noted that she tried exceptionally hard to raise her girls in as gender-neutral an environment as possible, but that peer pressure from friends still plays a big role. “It’s just not cool. It’s not something they can talk about with their friends,” she said, adding that her family had found a workaround by sending her daughters to all-girls tech summer camp, Alexa Cafe, which takes the things young girls often care about and ties it to technology, creating an ecosystem where their interests are supported.

“Spend time with your kids and teach them how to do things,” added Gomez. “How are things made? Even learning how to do things like sewing, or making cookies. Making anything. All those things are fun. And what makes a great engineer? Creativity. We are lacking that in our schools. Tactile experience is really important.”

“It’s only recently have we started having these conversations out in broad daylight,” said Lisa Fetterman, founder & CEO of Nomiku, noting that this in itself is huge progress. “I don’t think I can go anywhere within my network without somebody commenting on the dearth of women in sciences, and I say, ‘hell yeah, keep talking about that, that’s great!’ It tends to make some of my other girlfriends in the field pretty … sad. And you know what? It is sad. But you have to swallow sadness and then use it.”

Kaulgud believes unconscious bias during the hiring process has an impact on the number of women who get placed in engineering jobs, as well as the subsequent male-dominated environment which can feel isolating to women, especially when they enter the “caregiving” stage of their lives where they are doing double duty as wives and mothers. “Women are doing different things than the guys and it starts becoming meaningful,” she said.

“Engineering is hard work. It doesn’t leave a lot of time,” agreed Gomez, who has a 5-year-old and 2-year-old, and returned to work just a week and a half after having her kids, because as CEO, she needed to be there. “I took my babies to work with me and I had a crib and all their gear, and I used to load them up, and they were in the office with me by myself until they were about 8 months old and then I had someone come to work to help me with them at my job, to play with them, and when they were ready to nurse I’d take them and I’d be on conference calls, I was meeting with people …” Gomez acknowledges that most women are not as lucky to be able to do that in their workplaces, and that women feel much more pressure than their male counterparts to be around for their babies, so a supportive work environment really helps.

Andrus added that it’s important for women to remember they can’t have it all, all the time. “You have to make some decisions. You can’t have it all because you will drive yourself insane,” she said, adding that she often tells women starting a family that it’s better to “hold still” and “not lose ground” than to simply quit for a few years, because in engineering, where technology is constantly moving forward, losing a few years can be critical and make it almost impossible to recover. Realizing that there will be years where a woman’s career doesn’t advance much while her kids are young can be hard, she said, but it beats the wracking guilt or quitting and never being able to get back in.

Hiring the best without bringing in any inherent biases is something most women on the panel agreed was tough, and something that needed more work to solve.

“I look for the best and most prepared people to hire. Gender neutral. Doesn’t matter,” said Gomez, adding that personality match was almost as important as technical chops when adding to her team. “I try to just relate to people professionally,” said Fetterman, noting that even innocuous sounding questions like, “what do you do on weekends” can trigger biases she would rather avoid when hiring. “Diversity is about not looking for it in some ways,” added Andrus, who, like the others, is a big proponent in judging women on what they do, and not on their gender.

“Do you feel like you’re mechanically inclined? What have you done in your life that has steered you in this direction? Do you build stuff at home? These types of interview questions help you figure out if that person is innately interested in those things,” added Gomez.

In terms of pay gap issues, most panelists felt that more salary transparency -- like they have in Nordic countries -- was a good solution to an age-old problem. “If you’re doing the job and you know what the salary is, you can go and negotiate it,” said Andrus.

Of course, equalizing pay is not always the right or fair way forward.

“I look at performance, and I figure out raises and salary based on that,” said Gomez, noting that comparing male and female salaries is “unfair in some ways.” One cannot, for instance, simply ignore the fact that sometimes women with young families want to work less hours. “For people who are at different stages in their lives, that translates. If I have to bring in an extra person to pick up the slack then that translates,” she said.

One thing all the panelists agreed on was that the task of getting more women into science and engineering is a big one.

“The Marines have an exercise for mental sturdiness if they have a huge task at hand,” noted Fetterman. “They ask, ‘How do you eat an elephant?’ First of all, you sous-vide it if anything,” she joked, adding, “but you eat it one bite at a time. Everybody here is taking one bite out of that elephant, and soon, that elephant will be gone … look at all of us in this room, we’re hungry!”