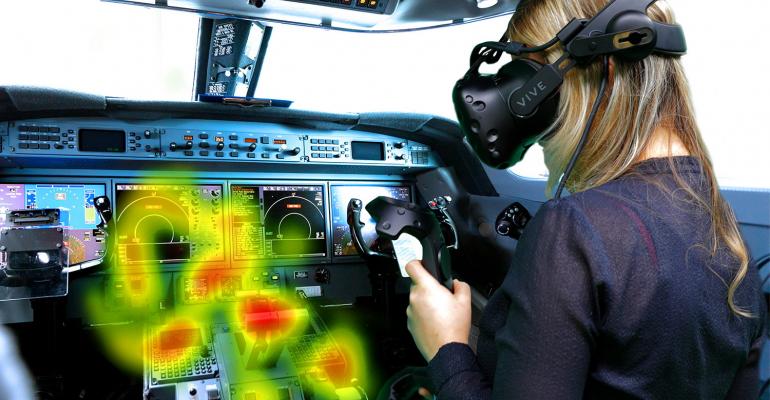 Eye tracking has been one of the most often-discussed emerging control schemes for virtual reality and augmented reality. Allowing users to navigate and manipulate objects in a virtual environment simply by moving their eyes opens a variety of options for improved ease of usability while shrinking the overall size of a VR rig in an enterprise environment. Tobii says its Pro VR Analytics tool offers real-time data on eye movements, navigation, and interactions—through tools such as heat and opacity maps—to mark how long areas or objects were looked at. It also can path maps to allow design engineers to see and understand how users are moving through a virtual space.

With applications across retail, medical, and entertainment, Tobii is placing an emphasis on the advantages that the new Tobii Pro VR Analytics tool offers design engineers. In commercial applications, this points to a variety of use cases in both training as well as gathering product insights from end users. Using VR or AR to train workers, for example, a manufacturing company could leverage eye tracking data to analyze where workers are being distracted or how they can be more clearly directed to completing a task. Architecture firms, which are using VR to create full-scale mockups of buildings, can use eye tracking to track peoples' attention to decide the optimal position for things like signage, emergency exits, or to make the building as a whole easier to navigate. An automotive or aviation company could place pilots and drivers into vehicles to better understand how they view a dashboard, heads-up display, or instrument console. And hospitals can take advantage of the data in simulated surgery scenarios to track the attention and awareness of surgeons as they perform virtual procedures.

“Traditionally, good contextual testing of design has required physical prototypes to be created, which is both costly and restrictive because it is not very supportive of collaborative or agile testing methods,” Dr. Tim Holmes, a visual neuroscientist and the director of research for Tobii Pro Insight UK, wrote in a blog post. “Virtual reality provides designers with a way to test early concepts in a meaningful environment without sacrificing the ability to test multiple concepts or variants of a design. With eye tracking, this means designs can be optimized to attract attention or for ease of comprehension—in the case of signage, for example.”

“VR puts you in complete control of an environment, while eye tracking explains our behavior while in that world—a powerful combination, making the behavioral insights accessible to many more people,” Tom Englund, president of Tobii Pro, said in a press statement.

In a statement released to Design News, David Watts, managing director of CCD Design & Ergonomics—a London-based human factors design firm that has integrated Tobii Pro VR Analytics into its workflow—said that the insights offered by eye-tracking allow designers to take a more evidence-based approach to the product design cycle. “We want to bring evidence into the design process," Watts said. “The visualizations tell us what people actually look at and how their attention is drawn to different design interventions we make. This methodology is so much more powerful than relying on our own intuition about what does and doesn’t work. It also provides a great visual record to demonstrate behaviors to others in the design team.”

Tobii's VR Analytics is designed to integrate into existing environments created with Unity, a video game graphics engine that also has become a popular tool for creating VR and AR environments for enterprise applications.

Right now, Tobii offers its eye-tracking hardware and software in two flagship products. On the augmented reality end, Tobii offers the Tobii Pro Glasses 2, which uses an array of four near-infrared cameras to track eye movements including corneal reflection and pupil size. On the VR end, Tobii offers a version of the HTC Vive headset with integrated eye tracking sensors. At the core of the integrated system, called Tobii Pro VR Integration, is the Tobii EyeChip—a system-on-a-chip (SoC) ASIC specialized for processing for eye tracking.