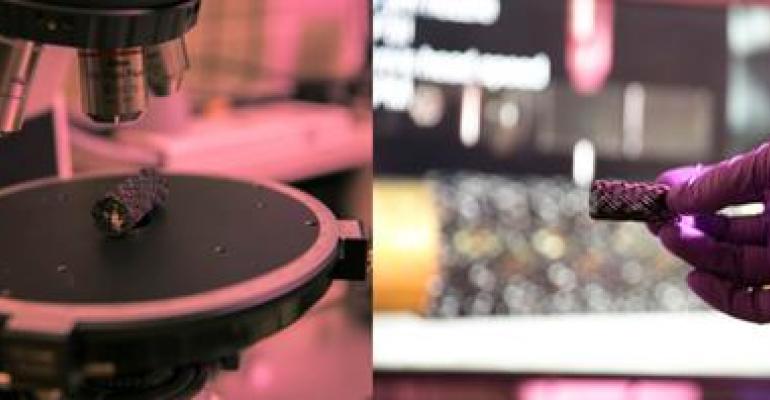 The latest is a new process developed by a team at Lawrence Livermore National Laboratory (LLNL). Researchers there have 3D printed shape-shifting structures that can fold and unfold themselves, or expand and contract in size, when prompted by changes in electricity or heat. The primary shapes they created were printed with shape-memory polymer inks developed by the team using a direct-ink writing 3D printing process.

The team says it is the first to combine conductive shape-memory materials with 3D printing and origami-like materials. That may be true for the "conductive" part, but two years ago we reported a University of Colorado Boulder team's achievement of combining shape-changing materials that respond to heat with origami-like unfolding and 3D printing. Using an Objet Connex multi-material 3D printer, that team incorporated shape memory polymer fibers into a matrix of the 3D printer's composite multi-materials, and printed objects in one shape that changed its shape later, including a self-assembling cube.

At Lawrence Livermore, researchers created structures such as boxes, spirals, and spheres from an ink made from soybean oil and additional co-polymers, plus carbon nanofibers. They then programmed these structures into different, temporary shapes using specific temperatures determined by the material's chemical composition. Exposing the structures to ambient heat levels or heating them with an electric current made them revert back to their original shape.

The researchers described their work in an article in Scientific Reports. They say the materials could be used to create extremely complex parts. "If we printed a part out of multiple versions of these formulations, with different transition temperatures, and run it through a heating ramp, they would expand in a segmented fashion and unpack into something much more complex," said Jennifer Rodriguez , lead author and a postdoc in LLNL's Materials Engineering Division.

Through a direct-ink writing 3D printing process, the team produced several types of structures -- a bent conductive device that morphed to a straight device when exposed to an electric current or heat, a collapsed stent that expanded after being exposed to heat and boxes that either opened or closed when heated. Researchers at LLNL have been working for some time with multiple additive manufacturing micro-manufacturing processes, including direct-ink writing, to create new materials composed of microstructures with micrometer resolutions.

Researchers said the technology could have applications in aerospace, such as solar arrays or antennae that can unfold; flexible circuits; robotics devices; and medical uses, such as stents that expand after being exposed to heat. The work derives from a Laboratory Directed Research & Development project to develop high-performance 3D printed carbon fiber composites. Other lab scientists and engineers who contributed to the project are Cheng Zhu, Eric Duoss, Thomas Wilson, and Chris Spadaccini.