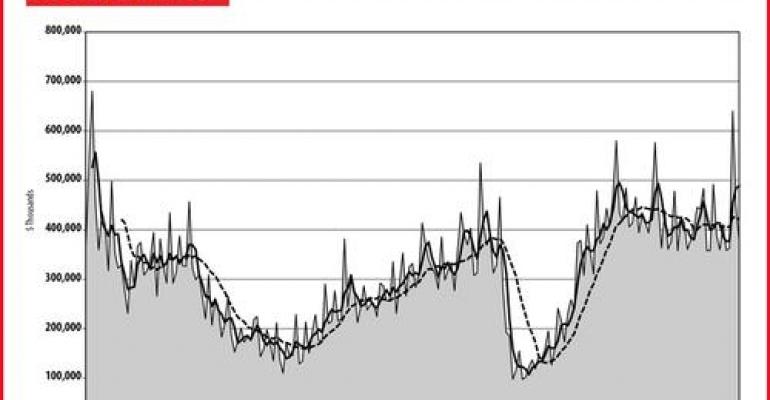 US orders of metalworking capital machinery cooled significantly in the two months following last September's big International Manufacturing Technology Show (IMTS), according to the latest data tracked by that show's organizer. But the nation's manufacturing sector is predicted to grow robustly again this year and buoy industrial machinery investment, which bodes well for the machine design and manufacturing industry.

Factory bookings of CNC metal cutting, forming, and fabrication machinery across the nation in November totaled roughly $378.1 million, representing a 15.5% drop in volume compared to October, the Association For Manufacturing Technology (AMT), a trade group representing machine tool designers and manufacturers, announced yesterday. That followed October's precipitous 35% volume drop in "manufacturing technology orders" as referred to by AMT, in the wake of a lofty, IMTS-fueled September run.

"Many manufacturers took a 'pause' in November to assess the challenges from the previous few months, such as contraction in China, Europe, and Russia; less activity from the oil and gas industry due to the dramatic drop in prices; and perhaps a little bit of the 'IMTS Effect' pulling some sales forward," said AMT President Doug Woods, referring to how the Chicago-based IMTS, which takes place every two years at McCormick Place, historically creates a spike in sales of machinery during and immediately following the trade show.

AMT statistics indicated machine tool sales for September leaped to $647.6 million after a record-attendance-setting IMTS earlier in the month. The monthly total was 77.3% higher than August's volume, and up 61.4% over the previous September -- typical of an "IMTS year." An encouraged Woods at the time said that the high number of purchasing decisions was "a great sign that manufacturers are eager to invest in equipment that will boost their productivity." 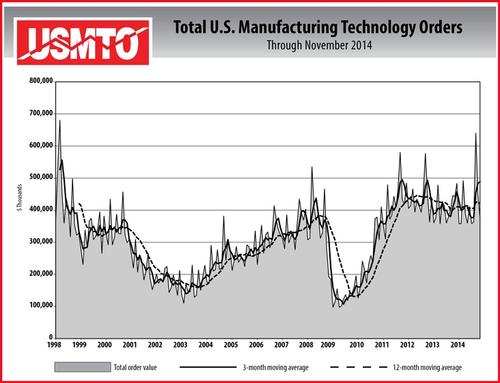 However, the post-IMTS hangover was particularly dramatic, as machinery sales fell by almost $230 million in October, to $417.8 million, the AMT data showed. The drop was steeper than the average 24% decline for the month following IMTS since 1998. The month's volume was also down 6.2% compared with October 2013.

The October total for CNC machinery bookings normalized 2014's order pace to what Woods characterized in December as "low growth but stability for order volume." Through November, year-to-date metalworking machinery sales totaled approximately $4.57 billion, which was a lukewarm 2.6% ahead of 2013's pace. Still, US machine tool investment has returned to historical high levels, five years after the official end of the recession, and analysts predict the US will return to be the world's largest machine tool market by region.

AMT's downward trending data in new CNC machinery investment correlate with the broader manufacturing activity slowdown in the US according to recent monthly data published by the Institute for Supply Management (ISM) and others. That trade group's closely watched national purchasing managers index (PMI) increased 2.4% in October to a 59% rating but ticked down by 0.3% in November to a 58.7% reading before tumbling a significant 3.2% in December to just 55.5%.

While any number above 50% in the PMI indicates an expansion in US manufacturing activity, the month-over-month drops in both November and December mark a deceleration in growth by the sector.

The ISM data, however, were contradictory to national industrial production data published by the Federal Reserve last month. According to the Fed, the US manufacturing sector's output soared 1.1% in November, the latest month available, on widespread gains among industries, including a 1% gain in machinery production and a 5.1% jump in motor vehicles and parts.

"Despite a downward monthly trend in manufacturing technology orders, we remain bullish on the US industry market overall, with robust factory production and strong performance in the automotive sector," Woods said. "We anticipate 2015 to be another year of positive growth, with manufacturing leading the US economy."

Yet another trade group, the Manufacturers Alliance for Productivity and Innovation (MAPI), in a report last month, predicted that US manufacturing production should come in at an annualized 1.4% gain for Q4 2014, versus a 3.9% ramp-up in Q3. Also in the report, MAPI expected a 3.3% expansion for US manufacturing for all of 2014, and forecasted the sector to grow 3.5% this year. It pinpointed investments in natural gas infrastructure, transportation infrastructure, factory automation, medical care expansion, and the housing supply chain as growth drivers.