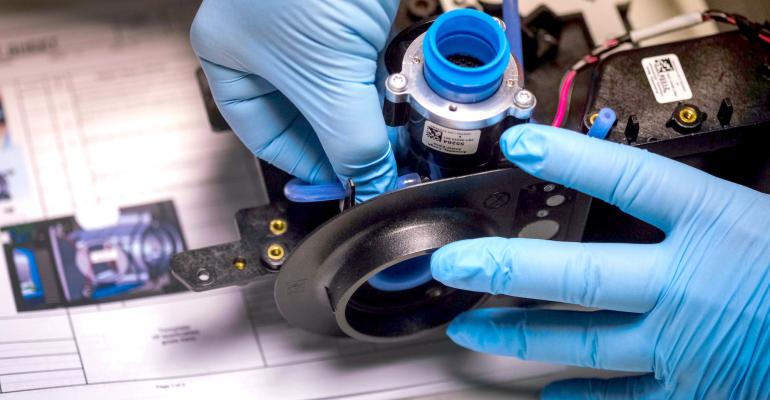 Forecasts for reopening auto plants in mid-April look too optimistic.

U.S. automotive manufacturing has entirely stopped in response to the COVID-19 coronavirus pandemic, with companies and their employees left waiting to learn when they might be able to resume operations.

General Motors says that its factories’ production status is being evaluated weekly after the company passed its initial shutdown period that ended March 30. “GM and the UAW have always put the health and safety of the people entering GM plants first, and we have agreed to a systematic, orderly suspension of production to aid in fighting COVID-19/coronavirus,” said GM Chairman and CEO Mary Barra.

Meanwhile, however, GM has reactivated its Kokomo plant to produce Ventec ventilators as part of its partnership with that company. Currently the factory is being prepared and the workforce, which will eventually number 1,000, is being trained. Production is slated to start mid-April.

“Every ventilator we build can help save lives, and GM’s global supply base and manufacturing teams, the UAW, and the Kokomo community are working with passion and unwavering commitment to get the job done,” said Gerald Johnson, GM executive vice president, Global Manufacturing. “People have moved mountains to help increase production of Ventec’s critical care ventilator and we are just weeks away from delivering these lifesaving devices. I have never seen anything like it in my career.”

Obviously, the same health threats that have suspended automotive production apply to ventilator production, so GM is taking specific steps to mitigate the hazard. Specifically, everyone arriving for work will be required to sanitize their hands immediately upon arrival and have their temperature checked with a non-contact thermometer before entering the job site. Then they will work their shift wearing medical-grade protective masks. Cleaning crews will clean and sanitize common touch surfaces such as door handles, as well as common areas, at least three times per shift. Each workstation will be manned by one person, and each workstation will be spaced at least six feet apart.

Initial production will begin with one shift, with second and third shifts added soon thereafter, with each shift entering and exiting through different doors to minimize social contact. When a shift ends, there will be a 30-minute interval between shifts to allow employees to clean their workstations when they arrive and again before they leave.

Ford acknowledges that its factories will not restart under its initial plan to reopen them starting April 6 at Hermosillo, Mexico and April 14 for key U.S. plants, with new target restart dates to be announced later, according to the company. “The health and safety of our workforce, dealers, customers, partners and communities remains our highest priority,” said Kumar Galhotra, Ford president, North America.

Ford’s Rawsonville Components Plant will begin producing ventilators with additional health measures in place. Workers will have to self-certify online every day that they are not experiencing any COVID-19 symptoms. If they are, they will not be allowed to work. Work stations will be spaced at least six feet apart to maintain proper social distancing. Shifts will be separated so there is no contact between workers.

Ford’s Rawsonville Components Plant in Ypsilanti, Mich., will start making the GE Healthcare/Airon Model A-E ventilator the week of April 20. The company says it will produce 1,500 ventilators by the end of April, 12,000 by the end of May and 50,000 by July 4. “The Ford and GE Healthcare teams, working creatively and tirelessly, have found a way to produce this vitally needed ventilator quickly and in meaningful numbers,” said Jim Hackett, Ford’s president and CEO.

Fiat Chrysler Automobiles is shut down, with no specific plan for when it will be able to reopen factories. “We need to ensure employees feel safe at work and that we are taking every step possible to protect them,” FCA CEO, Mike Manley said. “We will continue to do what is right for our people through this period of uncertainty.”

FCA, like Ford and GM, is producing protective face masks for healthcare workers and emergency responders to wear on the job. Production is just starting, with a target of making a million facemasks per month and donating them to police, EMTs and firefighters, as well as to workers in hospitals and health care clinics.

“Protecting our first responders and health care workers has never been more important,” said Manley. “In addition to the support we are giving to increase the production of ventilators, we canvassed our contacts across the healthcare industry and it was very clear that there is an urgent and critical need for face masks. We’ve marshalled the resources of the FCA Group to focus immediately on installing production capacity for making masks and supporting those most in need on the front line of this pandemic.”

Toyota Motor Sales, USA, has announced its U.S. plants are closed until April 17, with the goal of reopening them April 20, with the proviso that it is constantly evaluating that schedule.

The company’s emergency response production is still in development, with announced plans to 3D print face shields right away, while it pursues filter suppliers for filtering masks. Additionally, Toyota is working with two ventilator manufacturers to assist in boosting their production volume.

American Honda Motor Co. says its U.S. car, motorcycle, engine and transmission plants are currently closed through at least April 10.  That is the same target date for Volkswagen of America’s U.S. plant in Chattanooga, Tenn. and for Hyundai Motor America. Kia Motors America is aiming for April 13 to restart its factory.

Those dates seem optimistic, considering the Institute for Health Metrics and Evaluation forecast of April 15 for peak resource use in the U.S. in response to the virus, with a slow decline thereafter.