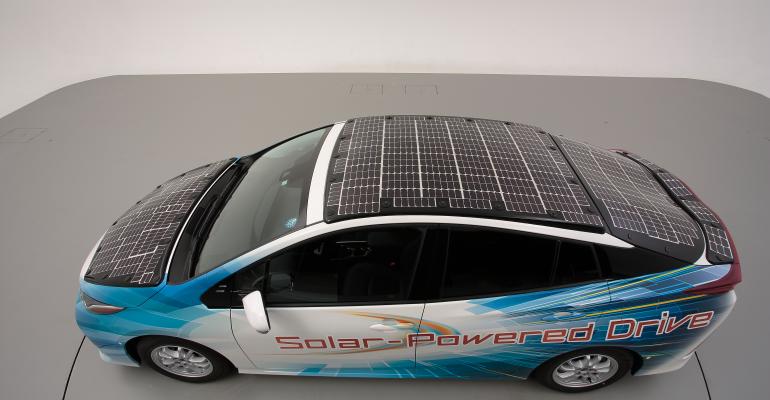 The idea of a solar-powered car is an appealing one. The first official solar car race was the Tour de Sol in Switzerland in 1985, and since that time similar races have taken place in the US, Australia, and Europe. The vehicles for such competitions are usually built by universities, often in partnership with car makers and aerospace firms, and are usually highly aerodynamic, single-seat machines having little to do with practical transportation.

Now, Toyota has announced that it is partnering with Sharp and the New Energy and Industrial Technology Development Organization (NEDO) in Japan to test a plug-in Prius hybrid whose power system has been augmented by highly-efficient solar cells. According to a Toyota news release, “The trials aim to assess the effectiveness of improvements in cruising range and fuel efficiency of electrified vehicles equipped with high-efficiency solar batteries.”

Anyone who is familiar with solar cells will be immediately doubtful about their on-board use to power a vehicle. Photovoltaic (PV) cells are great in stationary applications where, on a rooftop or in a field they can cover a large area and generate electricity, even when the sun is partially hidden behind clouds. In fact, in the early days of electric vehicle (EV) acceptance, it wasn’t uncommon for EV owners to use a rooftop solar array to help charge their vehicles. But finding enough surface area on a vehicle to mount enough solar panels to make a difference is a problem.

Solar panels have been used on some EVs—the original Nissan Leaf for example had an option of a small solar panel on its rear spoiler whose purpose was to maintain the charge of the car’s 12-volt auxiliary battery. Likewise, Toyota has offered solar panels for the roof of its Prius that generated enough power to run a cooling fan in the cabin.

Early in 2019, German company Sono Motors announced that it would be going into production with its Sion solar-powered EV. Similar in size to a Nissan Leaf, every flat surface of the Sion is covered in solar cells. The company claims that on a sunny day, the Sion will gain about 19 miles of driving range from the 1.2 kilowatts of output that the solar panels can produce. Although the company plans to eventually sell its Sion worldwide, initially it is concentrating on the European market.

Sharp has developed a high-efficiency solar battery cell with a conversion efficiency of 34 percent (about 10% higher than current commercial cells) and modularized it to create an onboard solar battery panel for Toyota. The solar cell is a thin film about 0.03 mm in thickness. Toyota installed this panel on the roof, hood, rear hatch door, and other parts of its "Prius PHV" to produce a car that could be tested and demonstrated on public roads.

According to the news release, “By enhancing the solar battery panel's efficiency and expanding its onboard area, Toyota was able to achieve a rated power generation output of around 860 watts.” The result is a system that charges the driving battery while the vehicle is parked and also while it's being driven. During a full day, Toyota estimates the solar panels will add about 27 miles of EV driving range to the Prius. Because an average person in the US drives around 29 miles per day, the use of solar power for EV charging is beginning to look more practical.