Your Humble Old Bicycle Is Getting Revved Up by IoT

Since its introduction in Europe in the 19th century, the bicycle has definitely seen its fair share of changes to its mechanics and design. But up until now the bike has mostly been off the grid — powered by humans and void of technology. This is changing, thanks mostly to the ubiquity of smartphones and the growing trend of IoT. Connected devices are transforming your bicycle into Bike 2.0 — making bicycles safer, more reliable, more secure, and smarter.

The SmartHalo biking system, for example, is a handlebar-mounted device that gives your bike wonderful new powers, including turn-by-turn navigation. After entering a desired route in the SmartHalo app, the device’s LED ring, found at the top of the unit, will light up to direct the rider (to turn left, right, etc) and confirm when he or she has reached the destination. The same LED ring will also notify riders if they are receiving a call or keep them up to speed with the weather. 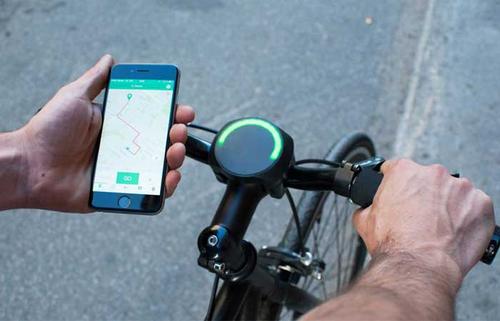 As with any IoT tool, a big part of the SmartHalo system is data collection. During the ride, SmartHalo will track cycling metrics such as the time and distance traveled, average speed, and calories burned — all of which can be visualized in the accompanying app. Like other fitness apps, SmartHalo allows users to set fitness goals and motivates users to meet them.

As safety is paramount when riding a bike, SmartHalo also comes equipped with an ultra-bright light, which is activated as soon as the sun sets. An onboard motion sensor allows the device to turn the light off automatically when the bike is not in use. This same motion sensor is also used to trigger an alarm when the bike is being tampered with. The device will only unlock when you are nearby (or more correctly your smartphone); if others attempt to take your bike, an alarm will sound.

But it isn’t just the bike that is getting smart. Taking the biking experience to the next level, MindRider, originally developed at MIT, is a helmet equipped with sensors, including an EEG sensor to monitor brainwaves while wearers are in transit. MindRider combines the brainwave data from its EEG sensors with GPS to show riders “sweetspots,” or areas where they were relaxed and calm, and “hotspots,” places that required them to concentrate harder. This insight is aimed at helping riders make better decisions about their routes and travel through more sweetspots than hotspots, so that they arrive at their destinations more calm and relaxed.

Where MindRider focuses on the feel of the ride, Lumos is a helmet that wants to ensure that the rider gets there safely. This water-resistant helmet features integrated bike lights and turn signals to ensure that vehicles and pedestrians  are aware of the rider's actions. The brake lights and turn signals are triggered using a handlebar remote, which is part of a system that can be attached to any typical bicycle.

With an estimated over 67 million cyclists in the US alone, bicycles are great candidates to receive smart features with purpose. Using technology to keep bicyclists safe and getting them to their destinations on time and in a better mood has clear benefits, with the help of sensors, lights, portable battery power, and smartphones.