Using 3D Printing in the Mass Production of Consumer Electronics

Optomec has been working with customers to prove the viability of 3D printing production-grade functional electronics in very high volumes using its Aerosol Jet conformal printing technology. But company representatives haven't been able to say much about what exactly those customers are doing. 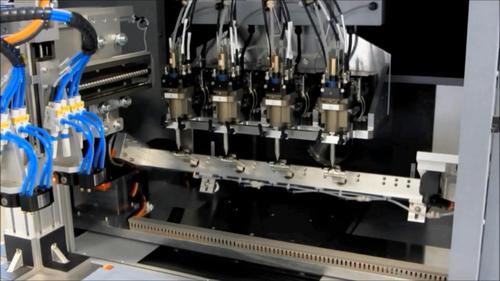 This is the first time anyone has used 3D printing in the mass production of consumer electronics, said Vartanian, and we think he's right. "LITE-ON is running the systems 24/7, they have been since around last July, and they will continue through the summer," he said. The contract manufacturer started out using Aerosol Jet conformal printing by developing prototypes for its world-leading OEM customers, which include makers of communication devices, personal care, and automotive products. Now it's got multiple production machines, each a 5-axis motion platform with multiple printheads, in Guangzhou, China. Machines are configured to handle common tablet and smartphone form factors, each can handle multiple common electronics materials such as ceramics, plastics, and metal, and each can print at least two to three million units per year.

Conformal printing matches circuits to the varied, three-dimensional surface they're printed on, with all its miniature mountains and valleys. The Aerosol Jet process can print a broad spectrum of conformal functional circuitry -- not just interconnects -- such as sensors, EMI shielding, antennas, and a variety of active and passive components using a thin-film process, without the need for plating. It can also use a wide variety of materials, such as conductive metal and polymer inks, dielectrics and adhesives, resists, etchants, and resistor inks. 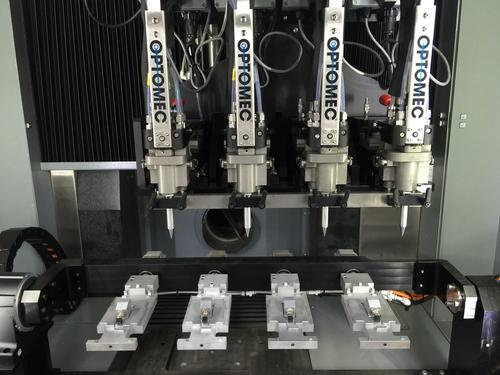 The system's open architecture lets customers optimize the configuration of their in-house automation for specific production needs. "LITE-ON did a lot of work to make this breakthrough achievement of 3D-printed electronics in mass production possible," said Vartanian. "They developed the printing process; for example, modifying the silver ink to lower its sintering temperature below the substrate's heat deflection temperature. They also developed a pre-printing method to enhance ink adhesion so the printed pattern could withstand stringent environmental testing, such as humidity and salt spray."

As a result, the technology is fully integrated into LITE-ON's conventional manufacturing process, replacing a step. Traditionally, that step would be laser direct structuring, said Vartanian. Conformal printing of 3D antennas on the standard plastic enclosures and inserts of smartphones and other mobile devices allows different placement of the antennas, reducing mobile device thickness. A wide variety of materials can be used, including conductive metal and polymer inks, dielectrics and adhesives, resists, etchants, and resistor inks.

The systems have the throughput LITE-ON needs for mass production and it's cost effective enough that the company was willing to go public with its use, said Vartanian. LITE-ON's senior manager of technology development antennas, Henrik Johansson, said the technology "3D prints sensors, antennas, and other functional electronics onto plastic components and covers as well as metal die-cast insert-molded polymer frames, and even onto glass panels and ceramic materials."

Vartanian says this is only the beginning of what can be done with the process. "Its high resolution allows us to 3D print circuits with high fidelity to improve data transmission," he said. "We can print highly integrated antennas and sensors onto devices, making them smart, and able to connect to the Industrial Internet of Things. But it's design software that lets designers build intelligence into parts. So design software has to be cognizant of what 3D printing can do, and how it can solve different design problems."

Optomec is taking steps to make that happen. In December, it announced a strategic investment by Autodesk. Optomec has already used Autodesk's software tools to generate design data that ultimately drives its 3D printers, and both companies plan on co-developing software tools to leverage the Spark 3D-printing platform. Those tools will improve the connection between additive manufacturing (AM) hardware and software so AM technology can be integrated into conventional production platforms.

Your direct link to advanced design and manufacturing products and suppliers
Search for products & manufacturers:
Next Class: Coming Soon
END_OF_DOCUMENT_TOKEN_TO_BE_REPLACED

Please wait a moment while we find a poll.
END_OF_DOCUMENT_TOKEN_TO_BE_REPLACED