HomeIndustryConsumer ElectronicsThin-Film Coating Boosts Lithium-Ion Battery Performance
Recent
Industry
Spooky Halloween Tech Is Here. Just Look at These Doozies
Oct 27, 2021
Halloween? What a Perfect Time to Think About Generating Electricity From Blood!
Oct 27, 2021
Ghosts of Medtech: What Ever Happened to These 7 Medical Devices?
Oct 27, 2021
How to Survive a Zombie Apocalypse
Oct 27, 2021
POLL
America's Supply Chain Crisis by the Numbers
Oct 27, 2021
Want Scary Stuff for Halloween? Check out the Tech for 2021
Oct 27, 2021
How Apple Influenced Medical Packaging
Oct 27, 2021
AAA Finds that ADAS Sensor Vision Permits Crashes 33 Percent of the Time in the Rain
Oct 27, 2021

Researchers have developed a process of simultaneously “doping” -- or adding an element or compound into a crystalline structure -- and coating lithium magnesium nickel oxygen (LMNO) with iron oxide using an atomic layer deposition (ALD) technique.

A thin-film coating developed by researchers at the Missouri University of Science and Technology (Missouri S&T) is one of the latest efforts to boost the performance of lithium-ion batteries.

A team led by Dr. Xinhua Liang, assistant professor of chemical and biochemical engineering, has developed a process of simultaneously “doping” -- or adding an element or compound into a crystalline structure -- and coating lithium magnesium nickel oxygen (LMNO) with iron oxide using an atomic layer deposition (ALD) technique.

Rajankumar Patel, a PhD candidate in chemical engineering, did the majority of the experimental work on the project under Liang’s tutelage. The team began working in early 2013, Liang told Design News, with the aim to develop a battery that did not sacrifice lifetime for capacity improvements and vice versa.

“The goal was to improve the initial capacity fade and lifetime of a battery simultaneously, to solve the trade-off between the species transport (capacity) and protection (lifetime), by developing a reliable, repeatable, and easy-to-implement process,” he said. 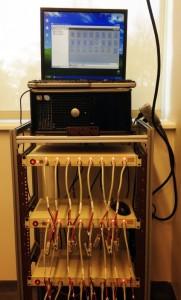 The team published a paper on their findings entitled “Employing Synergetic Effect of Doping and Thin-Film Coating to Boost the Performance of Lithium-Ion Battery Cathode Particles” in the journal, Scientific Reports.

Liang explained how the team achieved its goal by following steps as part of a single ALD cycle to substitute small amounts of other materials for nickel or manganese in the LNMO lattice, which research has found to be a popular way to improve cycling performance.

“In this study, the crystal structure of LMNO in an oxidative environment at 450C temperature allows the iron to diffuse and partially substitute either the nickel or manganese in such a way that the LMNO structure holds,” he said. “The iron oxide coating occurs on the surface of LMNO. The iron precursor reacts with surface hydroxyl groups and once it saturates all the surface groups, then the unreacted precursor and byproducts are removed from the reactor. The second precursor is oxygen, which oxides the organic groups of the iron precursor. This way one single conformal layer of iron oxide grows on the surface.”

This process is repeated to achieve the desired amount of material deposition, he said. The best result of the battery in laboratory tests showed the initial capacity improvement by about 25% at room temperature and by about 26% at an elevated temperature of 55C (133F) at a 1C cycling rate, Liang said.

“The synergy of doping of LMNO with iron combined with the conductive and protective nature of the optimal iron oxide film led to a high-capacity retention -- about 93% at room temperature and about 91% at 55C (133F) -- even after 1,000 cycles at a 1C cycling rate,” he said. “This is equivalent of three years of battery life at almost the same performance as the day one. Now compare this to the laptops which experiences dramatic drop in their lifecycle within a year.”

Liang said that because the research uses already present anodes and cathodes, the technique can be used with a variety of lithium-ion battery designs by being added to the existing manufacturing process. “It could be very well integrated easily to provide the more superior product,” he said.

The team will continue to work on the research with an aim to precisely control the amount of doping and coating in every cycle,” Liang said. “We are working to improve the predictability of percentage of doped iron and film thickness of iron oxide,” he said, adding that the team should achieve this milestone soon.

Other researchers on the project were Amitava Choudhury, assistant professor of chemistry at Missouri S&T, and Ying-Bing Jiang, senior research scientist in the TEM Laboratory at the University of New Mexico.