Researchers at MIT have developed a way to generate portable power to replace batteries that uses heat rather than metals or toxic materials.

We all depend on battery technology to power the devices we use every day and take for granted. But with these devices becoming ubiquitous, that also means the use of more and more batteries, which become environmentally harmful waste once they are past their lifetime of usefulness.

Researchers at MIT think they may have found one solution to this problem with the development of a more environmentally friendly way to generate portable power that uses heat rather than metals or toxic materials.

The discovery that spurred the new approach stems back to 2010, when Michael Strano, a professor of chemical engineering at MIT, and his colleagues found that a wire made from tiny cylinders of carbon -- known more familiarly as carbon nanotubes -- can produce an electrical current when it is progressively heated from one end to the other.

At the time of the discovery, only a very small amount of current could be generated in the lab. Now, Strano and his team have achieved an increase in process efficiency of more than a thousand times, producing devices that can generate power that is similar to what can be produced by the current crop of top batteries, researchers said. 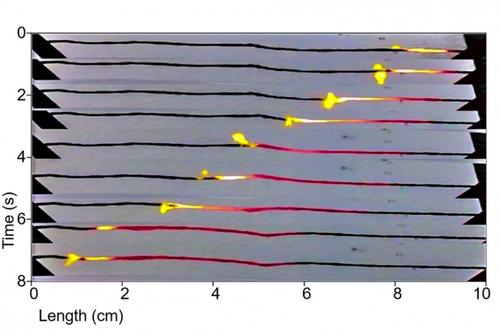 Carbon nanotubes are heated to generate power, a non-toxic method developed by researchers at MIT that could replace batteries.
(Source: MIT)

Strano said the improvements in efficiency “brings [the technology] from a laboratory curiosity to being within striking distance of other portable energy technologies,” such as lithium-ion batteries or fuel cells. In fact, the latest version of the device that the team created is more than 1% efficient in converting heat energy to electric energy, their most efficient result to date, according to the team.

Strano and his team published their findings in a paper in the journal Energy & Environmental Science co-authored by the professor and his doctoral students Sayalee Mahajan and Albert Liu, as well as five others.

The device they developed creates energy through heat when it’s coated with a combustible material and then lit by one end, causing it to burn like a fuse. The pulse of heat pushes electrons through the bundle of carbon nanotubes, carrying the electrons with it in a similar way to surfers riding a wave, researchers said.

Researchers used a commonplace and nonhazardous fuel to create the combustion -- sucrose, more commonly known as the table sugar we put in our coffee. However, they think other combustion materials could produce even higher efficiencies, and are experimenting with alternatives.

The key to getting the energy efficiency and output level up to that which is comparable to current battery technology is to find out why sometimes the heat wave produced a single voltage, while sometimes it produced two different voltage regions at the same time. To do this, the team said they came up with a mathematical model to describe why that occurs.

The current device is powerful enough to provide energy for simple electronic devices, like an LED. Moreover, unlike lithium-ion and other batteries, it should have a potentially indefinite shelf life and can be scaled down to tiny sizes, researchers said. Potential applications for the power source include not only common electronic devices but also the new generation of small wearable devices that are emerging and for which typical battery technology is too large or clunky.

The team said they will continue to work to achieve higher power output and efficiencies, expecting that it could take several years for the technology to be commercially available.