Meet Otto, the Robot That Wants to Run Your Home

If you're going to have a smart home, you might as well let a robot run it, right?

Samsung is hoping Otto, its "home companion robot," will introduce consumers to the friendlier side of the Internet of Things (IoT) as the company pushes further into the smart home market.

Otto is designed to be a central hub for controlling all of the smart devices and appliances in your home. Alongside being integrated with your smart appliances, the battery-operated robot can also answer questions (like "Okay Google" or Siri), play music, function as an intercom, take photos, and even function as your home security system.

Do you want real time traffic or weather updates? Do you want to know Bruce Springsteen's birthday? Maybe you'd like Otto to pre-heat the oven? Just ask. The unit is able to recognize individual faces and voices, as well. It can also recognize loud noises (like a window being broken) and send home security alerts. 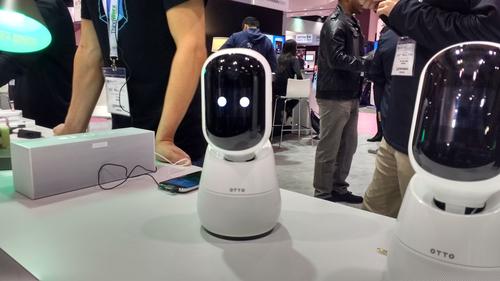 Otto is capable of controlling various devices around your smart home via voice command.

The original Otto prototype was built as a demonstration of Samsung's Artik IoT platform. Artik allows developers to integrate IoT devices across a single network that is open source as well as wireless protocol agnostic.

Otto is targeted at what Moe Tanabian, Samsung's VP of engineering for the Artik IoT platform, called "the softer side of IoT." During a talk at IoT World 2016 he discussed the design engineering process behind creating Otto - a process that he said was built around emotion.

Tanabian, who is also the head of Samsung's ID8 Innovation Lab, the same multidisciplinary team behind Samsung's Family Hub Refrigerator, said the team had three goals in mind. "We wanted to build a piece of technology that is endearing and emotional, super simple to use, and actually instills trust with users," he said.

Ultimately the team may have succeed, as evidenced by one case related by Tanabian in which a group of testers became emotionally distraught after the head came off of their prototype unit. "These guys got really, really emotional, to the level that tears were in their eyes. You don't have that type of emotional relationship with your TV. When you add a little bit of design and emotion to a product that's what happens." 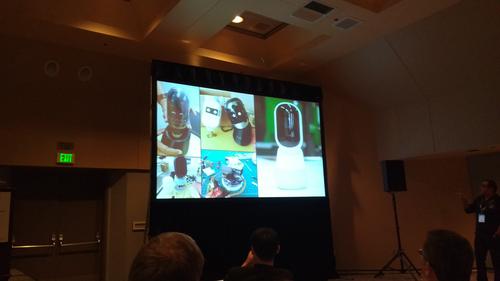 Asked how he and his team defined emotion in their product, Tanabian agreed emotion can be intangile and difficult to define. "Instead of trying to define emotion, we tried to test it," Tanabian told the audience. "We put Otto out there as we asked people -- children, women, men, the elderly -- to look at it and we observed how they reacted. If I had an Otto and I put it here right now people would start petting it -- that's emotion."

Thanks to the Artik platform, combined with rapid prototyping and 3D printing, Tanabian said the ID8 team was able to take what would have been a 6 month project in Otto and complete it in a manner of weeks. "It used to take 6 months to prototype, but now with rapid prototyping and Artik we an reduce that to weeks so if you make mistakes it's not detrimental. You can quickly retract and correct yourself."

Otto's concept was built around the idea of evoking emotion in the user according to Tanabian, but it was a hard balance to strike while maintaining a functional use for the robot. "We didn't want to build a toy, we wanted it to have enough emotion but not make it too emotional. ...We wanted to do home security features, personal assistant, connected home, and communications. We later dropped communications," Tanabian said.

Market research led the team to its first robot concept, dubbed Depu-T, which was a mobile unit. But the idea of creating a moving robot for the smart home was scrapped after this iteration due to regulatory and compliance challenges, as well as overall complexity and cost.

"Robots' ability to perceive in the home is not there," Tanabian said. "The big problem is that the home environment is very dynamic -- the dog is running around, babies, move around -- the robot really needs to have a real-time, full perspective of the environment, which would make Otto a $60,000 robot instead of a few hundred dollars."

Another earlier concept, dubbed Cara (because it could carry things) was targeted at elderly care and assisted living, but in testing the team found that people preferred a different function for it. "We thought elderly care would be a prime use case for it, but when we showed them this concept a lot of people said, 'That's great. I'm going to have it bring beer for me,'" Tanabian said.

Otto's current iteration is a stationary unit with an articulated head, neck, and waist. Its processing is handled with a hybrid algorithm that draws from the robot's local processor, as well as the cloud. Tanabian said this choice was built around speed and efficiency. Essentially, tasks went to whichever system (local or the cloud) could handle them fastest.

Of course the same questions around Otto are the same around all smart home devices. A Family Hub fridge will run you in the neighborhood of $3000-$4000, 3 times the price of all but the most-high end standard refridgerators, and Nest is slowly demonstrating that it's certainly possible for smart home IoT to fail in a big way. Meanwhile, analysts estimate that Amazon has moved 3 million Amazon Echo units (a product Otto draws a lot of comparison to) as of April 2016.

Will Otto be the product that finally creates mass adoption toward smart homes? Time will tell whether Samsung's emotional robot will tug at consumers' wallets as effectively as their heart strings.

Would you let a companion robot like Otto into your home? Let us know in the comments.

Check out Otto singing for the crowd on the exhibition floor at IoT World 2016.

END_OF_DOCUMENT_TOKEN_TO_BE_REPLACED

Please wait a moment while we find a poll.
END_OF_DOCUMENT_TOKEN_TO_BE_REPLACED