Apple made some controversial decisions with the new iPhone 7 Plus, so what did it do with the extra space under the hood?

With the iPhone 7 Plus hitting stores this month it was only a matter of time before the team at iFixit got ahold of the device for a teardown. During Apple's Sept. 7 release event, the company said demands for new technologies have made space inside the iPhone more crucial than ever. Following the introduction of the Lightening connector back in 2012, Apple has moved ever closer to making its products into completely closed off systems incapable of supporting any third-party hardware (at least none that Apple doesn't approve of).

The last controversial move with the iPhone 7 came with the removal of the analog headphone jack. This means only headphones with a Lightning connector, or that use Apple's proprietary Bluetooth-like wireless technology, will work with the iPhone 7 models and beyond. It's a decision that proponents might call a smart move to push toward the future of audio technology and others might call a giant middle finger to anyone who owns a working pair of headphones purchased in the last 10 to 20 years.

So what did Apple gain by getting rid of the headphone jack? In short, more space for the Taptic Engine, and some help for the iPhone 7's much-touted waterproofing. According to iFixit, where the headphone jack would normally sit is now a molded plastic component near the Taptic Engine. Apple told iFixit this new component is a barometric vent. Because the new iPhone is so heavily sealed for waterproofing, the barometric vent helps to equalize the atmospheric pressure inside and outside of the phone to ensure the device has an accurate altimeter. 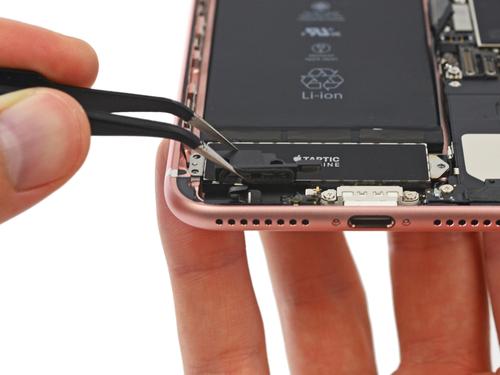 In place of the headphone jack, Apple has placed a barometric vent to ensure altimeter accuracy.

Of course it can also be argued that the space saved from the headphone jack carries through the entire design and affords other features like a larger battery (.82V and 2,900 mAh, compared to 3.8V, 2,750 mAh in the iPhone 6s Plus), two cameras (in the 7 Plus only), and, of course, the Taptic Engine itself.

The new workload for the Taptic Engine also includes modifications to the Home button, which, according to iFixit, has become more like a "Home touch sensor." Rather than an actual button, the new Home button is a removable, solid-state sensor that simulates the feel of pushing a button, using vibrations from the Taptic Engine and can respond to different pressures. The lack of a mechanical button was a plus for iFixit since the Home button has traditionally been a key point of failure in previous iPhone models. 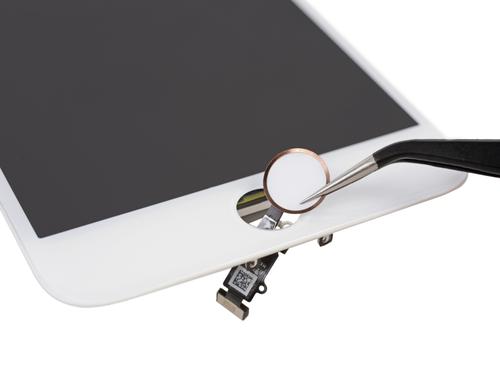 Rather than a mechanical assembly, the new Home button is a touch sensor powered by the Taptic Engine.

While the new waterproofing features (and the addition of some new screws) made some areas of the phone more difficult to access, iFixit gave the iPhone 7 Plus an overall repairability score of 7/10.

Your direct link to advanced design and manufacturing products and suppliers
Search for products & manufacturers:
Next Class: Coming Soon
END_OF_DOCUMENT_TOKEN_TO_BE_REPLACED

Please wait a moment while we find a poll.
END_OF_DOCUMENT_TOKEN_TO_BE_REPLACED