The iPhone 7 Is Crammed With New Sensor Technologies

The iPhone 7 and 7 Plus feature upgraded processors and new sensor technologies to enable a variety of new features including improved camera performance.

Apple has upgraded the iPhone 7's core processor with a proprietary chip dubbed the A10 Fusion, a 64-bit, quad core processor with two cores promising performance 40% faster than the A9 processor of the iPhone 6 and two other high efficiency cores that operate at a fifth of the power. Apple has designed the iPhone 7 with a performance controller that sends the correct tasks to the best processor core for maximum performance and battery life. Lower-level tasks like messaging will go to the efficiency processor for example, while the performance cores handle more robust apps like games. At the September 7 Apple Event, Philip Schiller, Apple's Senior VP of Worldwide Marketing, said the new A10 Fusion will allow the iPhone 7 to run console-quality games, as well as professional applications like Adobe Lightroom photo editing software.

The new iPhone's ever-useful Home button has been modified using Apple's Taptic Engine – a linear actuator introduced in the iPhone 6 that oscillates to provide a sense of haptic feedback the company calls “3D Touch.” Now, using the Taptic Engine, the Home button will be force sensitive (capable of responding to degrees of touch pressure) and will also be able to give users different types of force feedback based on output. Your messages, notifications, and ringtones will all “feel” different from each other, for example. 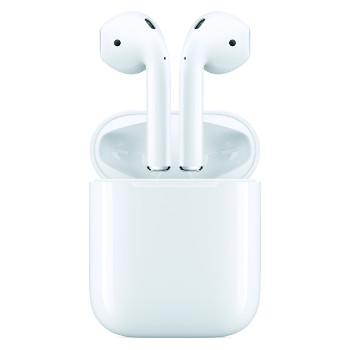 Apple's AirPods are new wireless earbuds that work on a low energy technology similar to Bluetooth.

Where the company has devoted the most R&D into the iPhone 7 is in the camera. Apple says it isn't trying to replace anyone's DSLR camera, but all signs are pointing in that direction for future iPhones. New to the iPhone 7 is a proprietary image signal processor (ISP) that the company says boasts twice the throughput of previous versions. This sensor is coupled with a new high-speed 12 megapixel sensor and a f/1.8 aperture, six-element lens that takes in 50% more light than previous iPhones, according to the company. There's also a new flicker sensor that can detect and compensate for flicker from artificial light.

Schiller called the new ISP a “super computer for photos” noting that it performs 100 billion operations in 25 milliseconds. Every time a photo is taken the ISP uses machine learning for face and body detection; sets the exposure, focus, and white balance; and also performs tone mapping, noise reduction, and can even fuse images together to create a single image of the best quality.

The ISPs performance looks particularly tailored to the new features of the iPhone 7 Plus, which features two 12 MP cameras, one a wide-angle 28-mm lens, the other a 58-mm telephoto lens. Having the two lenses offers up to 2x optical zoom, and the telephoto lens offers up to 10x software zoom. Not only can the ISP choose the best camera for a situation, it can also use its face detection capabilities to create a depth map of an image – allowing the iPhone 7 Plus to automatically blur background elements to create photos with a shallow depth of field as seen in DSLR cameras.

The most buzzed about new feature comes thanks to another new chip developed by Apple called the W1. This chip is central to a new Apple product – AirPods, essentially a pair of wireless earbuds designed for iPhones and Apple Watches. More than a pair of Bluetooth-enabled earbuds, Apple says its AirPods utilize a wireless technology that is similar to Bluetooth, but more energy efficient. The AirPods are also rife with sensors, as well: infrared sensors detect whether the buds are in your ear so they'll only play when you're wearing them. Motion accelerometers respond to your touch (no need to pull out your iPhone or Apple Watch to access Siri). And voice accelerometers recognize the source and vibration of your voice and reduce external noise.

All this new hardware meant that something had to go, and Apple decided to finally sacrifice the analog audio jack. Schiller told the audience it was more or less a case of out with the old, in with the new. With so much new technology crammed into the iPhone, each with its own demands, space inside of the device is at a premium, he said. And like any gentrified neighborhood it looks like the oldest real estate is getting pushed out first. Consumers are already raising eyebrows and within moments social media was filled with people expressing their displeasure, confusion, or just outright poking fun at the move. Apple says its pushing toward a wireless future, “It makes no sense to tether ourselves with cables to our mobile devices,” Schiller said. But you don't have to be a cynic to see how removing the option of cheap (affordable?), third-party headphones will probably help move a few more AirPod units and Lightening connector-based headphones.

What do you think of the latest iPhone? Share you opinions with us in the comments.

Your direct link to advanced design and manufacturing products and suppliers
Search for products & manufacturers:
Next Class: Coming Soon
END_OF_DOCUMENT_TOKEN_TO_BE_REPLACED

Please wait a moment while we find a poll.
END_OF_DOCUMENT_TOKEN_TO_BE_REPLACED