iFixit teamed up with The Wirecutter and Ken Shirriff to tear down the Swagway hoverboard. Does it really have swagger? Or is it just a new way to set your home on fire?

Any product called a hoverboard that doesn't actually hover should already raise a few eyebrows. Originally a product of China's infamously lax patent system, the hoverboard was the hot ticket item this past holiday season and has become all the rage with everyone from kids to celebrities.

But lately the hoverboard market has run into problems with shoddy knockoffs that save consumers hundreds of dollars off the retail price ... and also burn their houses down. It seems the hoverboard has a bit of a problem with its lithium-ion battery ... a very flammable one.

So what makes a hoverboard safe? Is this a flawed design or something else? To get to the bottom of things Andrew Goldberg over at iFixit decided to dismantle a Swagway (one of the more popular hoverboard brands).

Did he find solid engineering under the hoverboard's hood? Or a ticking time bomb? Check out the teardown below to find out.

This teardown was done with the assistance of The Wirecutter and electronics blogger Ken Shirriff. You can read an even more detailed version of the teardown over on the iFixit site. 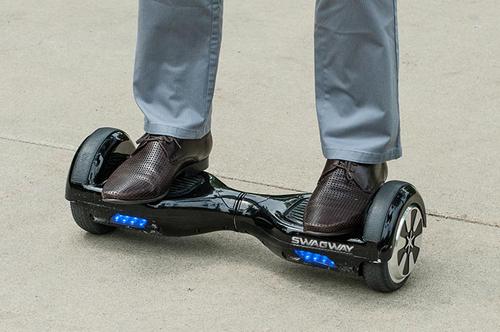 The Swagway is one of the most popular brands of hoverboard. Let's get started and see what's under the hood.

Andrew Goldberg is a technical writer and teardown engineer at iFixit.

[Main image via Swagway. All teardown images via iFixit.com/Andrew Goldberg]