Google has made its debut into smarthphone design with the Pixel and Pixel XL. But how do they stack up to their most direct competition, the iPhone 7? iFixit tore down the Pixel XL to find out.

Last month Google announced it was finally getting into the smartphone game with the Pixel and Pixel XL, a phone to replace the LG-manufactured Nexus brand phones. The Pixel is being manufactured by HTC, but this marks the first time Google will be overseeing the design of an Android phone itself. But does the Pixel have more going for it besides having Google's logo stamped on it? And how does it stack up against the competition?

iFixit made the Pixel XL phablet the subject of its latest teardown and found a product that looks ready to live up to its positive reviews and go head-to-head with the iPhone under the hood.

For starters, yes it has a 3.5-mm headphone jack ... and while the Pixel is lightly larger and heavier than an iPhone 7, the Pixel XL is slightly smaller/lighter than an iPhone 7 Plus. Further evidence for the anti-Apple folks that Apple just wants to use it Lightning Connector to create a closed-off system for its products.

The Pixel has two cameras -- an 8-megapixel front-facing camera for the selfie addicts, and a rear-facing, 12.3 megapixel camera capable of shooting 4K video at 30 fps. iFixit noted however that the Pixel XL doesn't have the optical image stabilization system found in the newest iPhone models. Remember the iPhone 7 Plus also has two rear-facing cameras, wide-angle, and telephoto, that Apple says allows the phone to choose the best lens for a picture.

Apple also filled the iPhone 7 and 7 Plus with a lot of proprietary hardware. But iFixit found the Pixel XL to have a modular motherboard setup with some familiar names attached to the motherboard. At the Pixel XL's core is a Samsung K3RG2G20BM-MGCJ 4 GB LPDDR4 mobile DRAM with a quad-core Qualcomm Snapdragon 821 processor layered underneath (two cores clocked at 2.15 GHz and two cores clocked at 1.6 Ghz), as well as chips from Qualcomm and Bosch handing various features like power management, orientation, acceleration, and pressure sensing, as well as LTE RF transmitting/receiving. According to iFixit, "More modularity means cheaper and easier repairs -- if a single component fails, you don't have to replace the entire motherboard or embark on a risky microsoldering adventure." 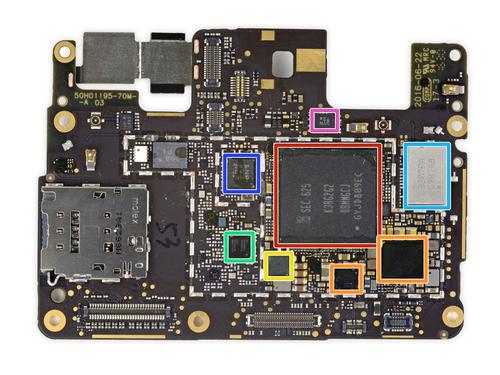 The Pixel even has its own answer to Apple's Taptic Engine (aka the button with no mechanical parts) in the form of a linear oscillator that simulates tactile feedback by vibrating a magnetic core between two springy metals. An X-ray on iFixit's site shows the two working side by side, but in the end the Taptic Engine appears to be much more sophisticated and versatile. Apple has even released an API for the Taptic Engine to allow developers to create their own forms of haptic feedback for applications.

Overall the Pixel XL's modular design earned it some points from the iFixit team but issues opening the device resulted in a reparability score of 6/10 (slightly worse than the iPhone 7, which earned a 7/10).