By now you're probably one of the millions who's watched the teaser trailer for the new Stars Wars film Star Wars: The Force Awakens ... And if you haven't watched it at least 10 times by now, what's wrong with you?

Of course anything this big is bound to get fans riled up and the most interesting and contentious debate revolves around the new lightsaber depicted in the trailer. 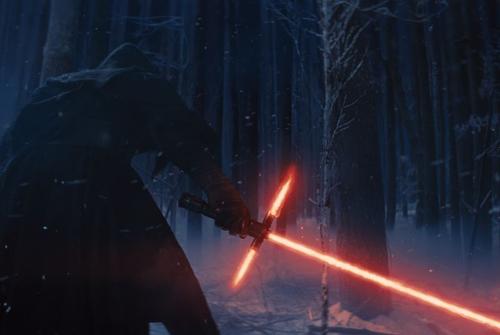 Ever since Darth Maul's double-bladed lightsaber debuted in Episode 1 (arguably the ONLY cool thing to come out of Episode 1) Star Wars fans have delighted themselves theorizing over other new styles and variations on the iconic weapon (nunchucks anyone?). This latest iteration, seen in the trailer, takes the form of a medieval claymore sword with an extended blade that's more flame-like than a solid laser beam, with the addition of a laser cross hilt (or crossguard) – to protect the wielder's hands as loss of a hand and/or arm seems to be the most common injury in lightsaber combat.

But once the excitement wore off many began to question just how useful and functional a claymore lightsaber (Laser Claymore? Lightmore? ... Claysaber?) would actually be in the Star Wars universe. Savvy viewers quickly noticed that the protective cross hilt lasers were not flush with the hilt – offering up a pretty significant weak point.

Speaking to The Washington Post, Kevin Cashen, a certified master bladesmith, said having a laser crossguard would actually put the wielder in MORE danger. "Even with more traditional hilts, larger crossguards can often snag the users more than it can do something against the opponent," Cashen told The Post. "That hilt would just take you apart if you started to do a lot of complex spinning.” While Cashen commented that the cross hilt could be useful for bashing opponents at close range, as on a traditional longsword, he said this was not a common practice and with a laser guard “the other 80% of the time you'd be in grave danger of searing yourself.”

Naturally the design has led to all manner of parodies:

But a few have taken up the challenge of designing a better lightsaber.

One common solution is this one proposed by a user on Reddit that turns the cross hilt into a V shape for better protection.

This design was also used by a character in the Star Wars expanded fiction, but the crossguard only used one beam instead of two.

T.C Sottek, a writer for The Verge, came up with a similar design, including an additional handguard underneath the crossguard and noted the advantage of the V-shaped crossguard is that “an enemy's sliding blade will get hella trapped in there and give you lots of leverage.”

Others have proposed material solutions such as this Reddit user who suggests that, “In the case of the Crossguard -- it would make sense to have a lightsaber-resistant metal for the crossguard emitter because that part of the lightsaber would be actively used to deflect other lightsabers. However, there is very little information about the Crossguard lightsaber. Lightsabers hilts are made of lots of different materials, depending on what's available and the user's preference. There was a Wookie (Gungi) in the Star Wars animated (series) that had a wooden hilt.”

Any ideas how you would improve the Light Claymore? Or how would you design a better lightsaber? Let us know -- or better yet show us -- in the comments section below!

Here's the trailer for the three of you who haven't seen it.

Your direct link to advanced design and manufacturing products and suppliers
Search for products & manufacturers:
Next Class: Coming Soon
END_OF_DOCUMENT_TOKEN_TO_BE_REPLACED

Please wait a moment while we find a poll.
END_OF_DOCUMENT_TOKEN_TO_BE_REPLACED