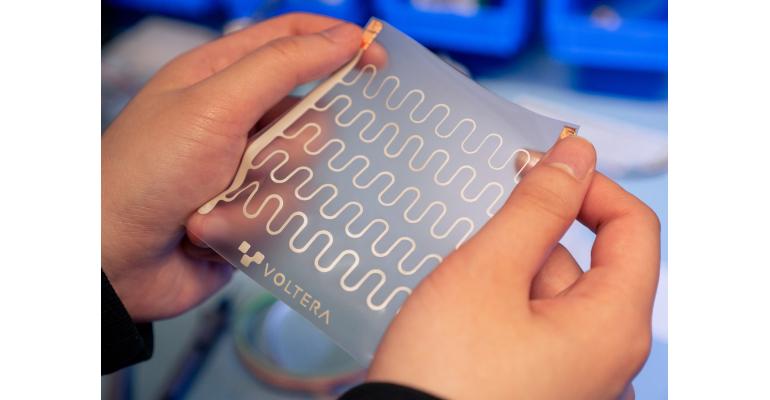 ‍NOVA from Voltera uses direct-write technology, a form of extrusion-based 3D printing, to deposit any screen printable ink material onto any substrate, according to the company. For instance, it can print electronic circuits on soft, stretchable, and conformable surfaces.

“This first-of-its-kind benchtop machine unlocks rapid flexible hybrid electronics prototyping and the ability to experiment with custom inks and a wide variety of substrates,” explained Alroy Almeida, CEO and co-founder of Voltera, in a news release. (View our gallery above to view more.)

At the Electronics Additive Manufacturing Lab at York University, masters student Yoland El-hajj has been exploring the use of direct-write technology to fabricate tattoo electrodes. El-hajj developed an experiment comparing the use of NOVA’s DIW technology with traditional inkjet methods for printing silver-based conductive inks on tattoo paper. The resulting tattoo electrodes were compared by their sheet resistance, impedance, and mechanical performance in terms of bending strain. Results suggest that traces printed using DIW technology have improved sheet resistance and impedance when compared with traces printed using inkjet technology. The proposed mechanism for these differences is because the viscosity of DIW conductive inks is significantly higher than inks used in inkjet technology, which are low viscosity and have a relatively high proportion of solvent, according to a statement emailed to Design News. DIW inks are therefore not absorbed as readily by the tattoo paper used as the substrate, which allows for more robust electrical traces and improved conductivity in comparison to inkjet inks.

“There is a large potential for the fabrication of medical electrodes using printing methods, and with the use of more robust materials. Printing-based techniques can provide numerous benefits for medical sensors, such as flexibility in the materials and patterns and personalization of the sensor structure. In addition, more electrically and mechanically robust materials can be implemented using flexible materials,” said El-hajj in the statement.

“I think where this sort of technology, NOVA, will shine is in applications that were not possible before,” Gerd Grau, director of the Electronics Additive Manufacturing Lab at York University, shared in Voltera’s press release. “You shouldn't fight or try to compete with silicon chips or PCBs. You should try to make something that's impossible with those technologies.”