The Challenge of Mobile Phone and IoT Antennas

Antennas are a crucial component of any connected device such as a mobile phone or IoT product. But choosing the right antenna for an application presents a key design challenge. Wireless devices use several radio bands, and reliable radio links are important. Creating effective antenna performance in mobile phones and other IoT devices requires engineers to examine a number of factors including antenna size, from what is needed to what is possible, antenna shape, and placement.

Mobile phones can contain anywhere from four to 13 different antennas. There are at least four radios (transmitters and/or receivers) in mobile phones made today: cellular, Wi-Fi, Bluetooth, and GPS. Some phones will have three more radios: 802.15.4 (930 MHz and lower), FM radio, and magnetic Near-Field Communication (NFC).

By contrast, most existing or envisioned remote IoT devices usually have one, maybe two, antennas. This makes sense given most existing or envisioned IoT devices are smaller than even mobile phones. Think smart watches, health and fitness monitors, skin moisture monitors, skin moisture monitors, vibration sensors, broadcast chips in retail store products, and many others that need a radio link for sending information to a mobile phone or the Internet.

What Is the Right Size for an Antenna?

Given the space restrictions in a mobile phone or a remote IoT device, the more appropriate question is, "How small can an antenna be and still work well?" A quick answer is: about one-quarter of a wavelength. Half a wavelength is the optimum length (see figure below) because it looks like a pure 73 ohm resistance (close to the 50 ohm resistance in most radio circuitry), but one can cut the size to one-quarter wavelength and it will still work well. 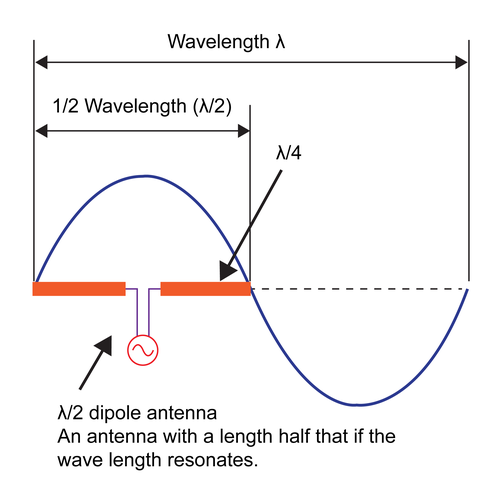 Additionally, there are tricks one can apply to reduce the antenna size such as using the ground plane of the circuit board or device cover, or zigzagging the antenna trace on the board. These tricks can make the antenna much smaller while giving performance close to the effective length of one-quarter wavelength. Antennas smaller than an effective length of one-quarter wavelength will work, but the signal strength will drop roughly with the area of the antenna, and the available frequency bandwidth will shrink.

So what are the wavelengths of all these radio bands? Two simple rules can help:

If we disregard the NFC frequency, which is really a magnetic field link, all these radios operate from from 88 MHz (FM radio) to almost 6 GHz (high Wi-Fi band). The most widely used radios in a mobile phone (the phone itself, GPS, Wi-Fi, Bluetooth) operate from about 800 MHz to 5.5 GHz, which converts to a wavelength range of 15 in. down to a little over 2 in. One-quarter of a wavelength at that range is about 4 inches down to 0.5 in. This says that only the 5.5 GHz band is a good fit for a typical mobile phone and that most of the antennas in such a confined space don't work as well as they could. The FM radio band has a wavelength of about 10 ft, so a tiny antenna will have terrible efficiency. Luckily, most commercial FM radio stations blast out about 100 kW.

How Critical Is Antenna Performance?

The size of a mobile phone or an IoT device clearly restricts its coverage, but not by dramatic amounts, like a factor of five, in usable range. This isbecause the radio signal drops off as the square of the separation distance at best, and often more like the 4th power of the distance because of blockage or signal fluctuation and delay spread from multiple reflections in the area. So if someone is giving up half of his radiated power because of a restricted antenna size, his usable range may drop by only 15-30%. Another big challenge is finding a place in the mobile phone or a small IoT device for an antenna, especially if there are many other antennas fighting for usable area.

What Antennas Are Used in a Mobile Phone?

The most popular printed antennas are patch antennas, inverted-F antennas (IFA), or Planar Inverted-F antennas (PIFA). They take up less space than a dipole antenna because they use the ground plane of the circuit board to help them radiate.

An example of a mobile phone radio antenna in an iPhone is shown below: 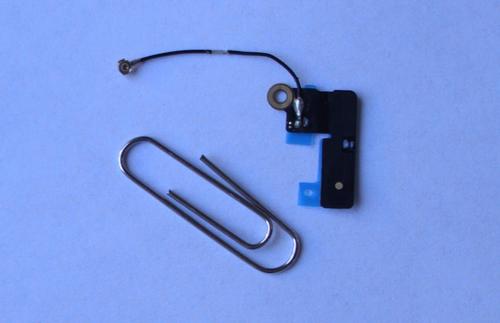 Having multiple antennas results in interference between antennas, which is very complicated. As a consequence, mobile phone antenna design relies more and more on electromagnetic simulation programs that model not only the antenna but the effects of conductors, dielectric material (plastic), and the human body that are very close to the antenna. No one wants a repeat of the early iPhone antenna problems.

What Antennas Are Used in IoT Devices?

Nowadays, mobile phones are not the only devices that need radio links. There are now smart watches, health and fitness monitors, outdoor thermometers, home temperature and lighting controls, remote cameras, retail store product broadcasts, and many others that need a radio link and a connection to the Internet.

For the most part, the radios in these new devices use the same standards and frequency bands as the multiple radios in mobile phones. The problem that some of these new devices face is that they have even less room for an antenna than a mobile phone. A clothing tag, a vibration monitor, or a noise detector may need to be in a very small package. For these smaller devices, the antennas have even more space restrictions.

Given that antennas for all the frequencies below the 5.5 GHz Wi-Fi band (where a 1 cm antenna is about 0.2 wavelengths) will be significantly inefficient in tiny sensor packages, designers of these devices will get less range than they achieved in mobile phones for the same power. In many cases, the frequency bands below 1 GHz will not be used if the enclosures are very small. That leaves the 2.4 GHz band (for Bluetooth, Zigbee, and Wi-Fi) and the 5.5 GHz band (Wi-Fi) until some of the newer proposed standards at frequencies as high as 60 GHz (where the wavelength is 5 mm) and beyond will permit more efficient and sophisticated antennas.

Think of these newer IoT hardware devices as a continuing evolution of an environment that started with mobile phones. First, there was the cellular network consisting of cell phone towers connecting to mobile phones at one end and the Internet at the other end. Next, there was Wi-Fi, which originally connected computers to the Internet through access points (hot spots) in the home or at gathering points like coffee shops. Then, mobile phones added Wi-Fi radios so that they could connect to the Internet either through the tried-and-true cellular networks or through the Wi-Fi hot spots.

While these wireless access networks were evolving, diffuse wireless networks with a lot of small access points and relay points, sometimes called"mesh networks, were evolving for industrial and home automation. The end result is that the world continues to add inexpensive and small radios to enable almost instant access to the Internet or other devices.