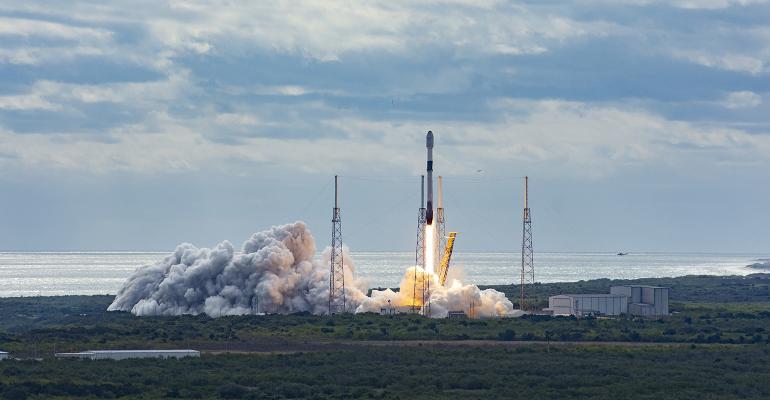 SpaceX launched 52 Starlink internet satellites on Oct. 5, 2022; to date, the company has launched 3,400 of the satellites.
Space-based energy requirements are expanding faster than the universe.

With satellites and space vehicles like Mars Rover proliferating on various missions—be it interplanetary exploration or expanding terrestrial communications—it might be surprising to learn that the requirements of those batteries aren’t dissimilar from Earthly needs.

To be sure, space-based energy requirements are ever-growing. For instance, SpaceX launched 52 Starlink internet satellites on Oct. 5; to date, the company has launched 3,400 of the satellites, has approval to launch 12,000 and is even applying for permission for 30,000, according to Space.com. Meanwhile, the US Space Force announced on Oct. 4 that it awarded rapid satellite launch demonstration contracts to Millennium Space Systems and Firefly Space Transport Services to support a 2023 mission.

• Large cylindrical cells varying in diameter and height with capacities in the 50Ah range.

• Flattened wound cells and large stacked plate prismatic cells. These cell formats have capacities up to 72Ah for use in space.

However, securing materials to build batteries for these critical uses is an issue being addressed at the federal level, Troutman said. Notably, many of the critical materials for LI battery cells—the raw anode and cathode materials, which include lithium, nickel, cobalt, aluminum, manganese and carbon—“are only available from foreign countries, where human rights and secure supply issues exist. The US government has issued the Bipartisan Infrastructure Law to support and encourage mining and domestic production of some of these materials. Work is also being done to generate partnerships with trusted ally countries to provide a secured supply of materials.”

To meet not only the growing demand but increasing security requirements, he continued, the Department of Defense and the electric vehicle industry are working to exert greater control over battery production and supply.

“The demand for battery/energy storage devices is greater today than it has ever been with the demand of batteries to support the multiple space constellations, increase in electric vehicles, and electrification of Department of Defense assets,” Troutman asserted. “The electric vehicle market is working to establish its own secure supply of batteries with dedicated gigafactories built to specifically support each electric vehicle manufacturer. The DOD is working toward US domestic sourcing of battery systems to meet the critical needs of secure military assets including space vehicles, ground vehicles, munitions and conformal portable soldier power sources. With the growth in the electric vehicle market, space communication and military defense constellations, secure domestic battery production needs are expected to continue to grow over the coming years.”

Then there’s deep space—although Troutman advised that the battery issues encountered in such intensive applications are surprisingly similar to those here on terra firma.

“Deep planet exploration, such as missions to Mars and the moon Europa, use batteries very similar to those used on standard applications on Earth,” he said. “Batteries for deep-space exploration missions require battery systems with a wide operating temperature range to minimize thermal management requirements on the battery, low capacity fade over cycle life and storage capacity fade.

“Those characteristics are similar to the needs of terrestrial battery systems, as energy density, long life and low-capacity fade are desired. The main difference between space batteries for deep space exploration or LEO/GEO/MEO spacecraft and terrestrial batteries is the environmental performance requirements—such as vibration, shock, thermal cycling and operating in a vacuum.” [LEO are low Earth orbit satellites, MEO are medium Earth orbit, and GEO are geosynchronous equatorial orbit.]

Early last year, the replacement of older NiH batteries on the International Space Station with LI batteries was completed—after 14 spacewalks by 13 astronauts. The first delivery of six LI batteries arrived in December 2016, and the final set launched in May 2020.

At the end of their lives, “spacecraft have a mandated requirement to have a de-orbit or graveyard plan,” Troutman said. “For example, spacecraft in LEO orbits must de-orbit—typically burn up in the earth atmosphere—within a 25-year period. There has been some discussion to reduce that time period through international standards, but to date the requirement has not been modified. Spacecraft in GEO orbits typically ‘push’ the satellite out to deep space upon reaching their end-of-life period.”