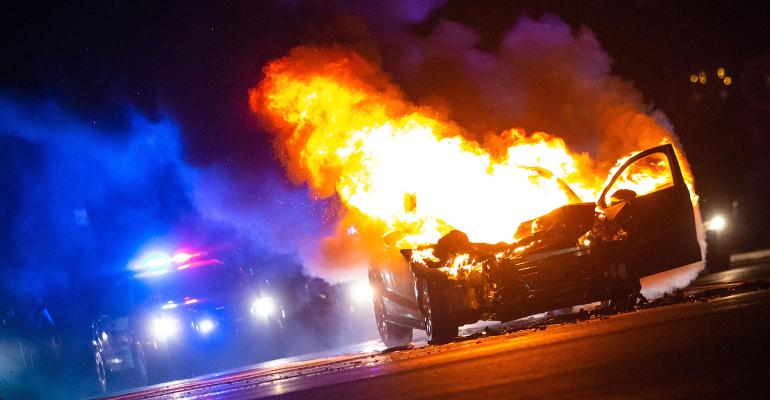 Jimmy Patronis, Florida’s chief financial officer and state fire marshal, has called for electric car companies to answer for electric vehicles that have burst into flames from the storm surge of Hurricane Ian. On October 17, he sent a letter to more than 30 electric vehicle manufacturers, including Tesla, Rivian, Ford, GM and others, calling on the companies to do more in helping firefighters mitigate risks associated with battery fires caused by salty storm-surge waters from Hurricane Ian.

“Florida firefighters have been the tip of the spear in hurricane recovery operations, and more has to be done to help these heroes deal with the unique challenges of EV fires. […] There is a population of vehicles that could spontaneously combust, putting our first responders at risk,” he wrote, adding that EV owners themselves are also in danger: “There could be a family who evacuated, whose home was left relatively intact from Ian, who may still lose everything because of an abandoned EV, left in their garage, that catches fire as a result of salty storm surge waters. That’s a risk that requires more of a response from manufacturers than just telling customers to consult the owner’s manual.”

Fears of “a ticking time bomb”

Related: What Is Behind Battery Fires in Electric Vehicles?

“On October 6th, I joined North Collier Fire Rescue to assess response activities related to Hurricane Ian and saw with my own eyes an EV continuously ignite, and continually reignite, as fireteams doused the vehicle with tens-of-thousands of gallons of water,”Patronis wrote.

“Subsequently, I was informed by the fire department that the vehicle, once again reignited when it was loaded onto the tow truck. Based on my conversations with area firefighters, this is not an isolated incident. As you can appreciate, I am very concerned that we may have a ticking time bomb on our hands.”

In his reply to Patronis, Danielson wrote, “we can confirm your experience in North Collier with reignition is not an isolated event. […] Test results specific to saltwater submersion show that salt bridges can form within the battery pack and provide a path for short circuit and self-heating. This can lead to fire ignition. As with other forms of battery degradation, the time period for this transition from self-heating to fire ignition can vary greatly.”

He also suggested, “It may be helpful for persons who are not involved in immediate lifesaving missions to identify flooded vehicles with lithium-ion batteries and move them at least 50 feet from any structures, vehicles, or combustibles.”

Patronis’s letter to the EV makers asks for a response by October 24.

See also: "Why Lithium-Ion Batteries Can Cause Fires."