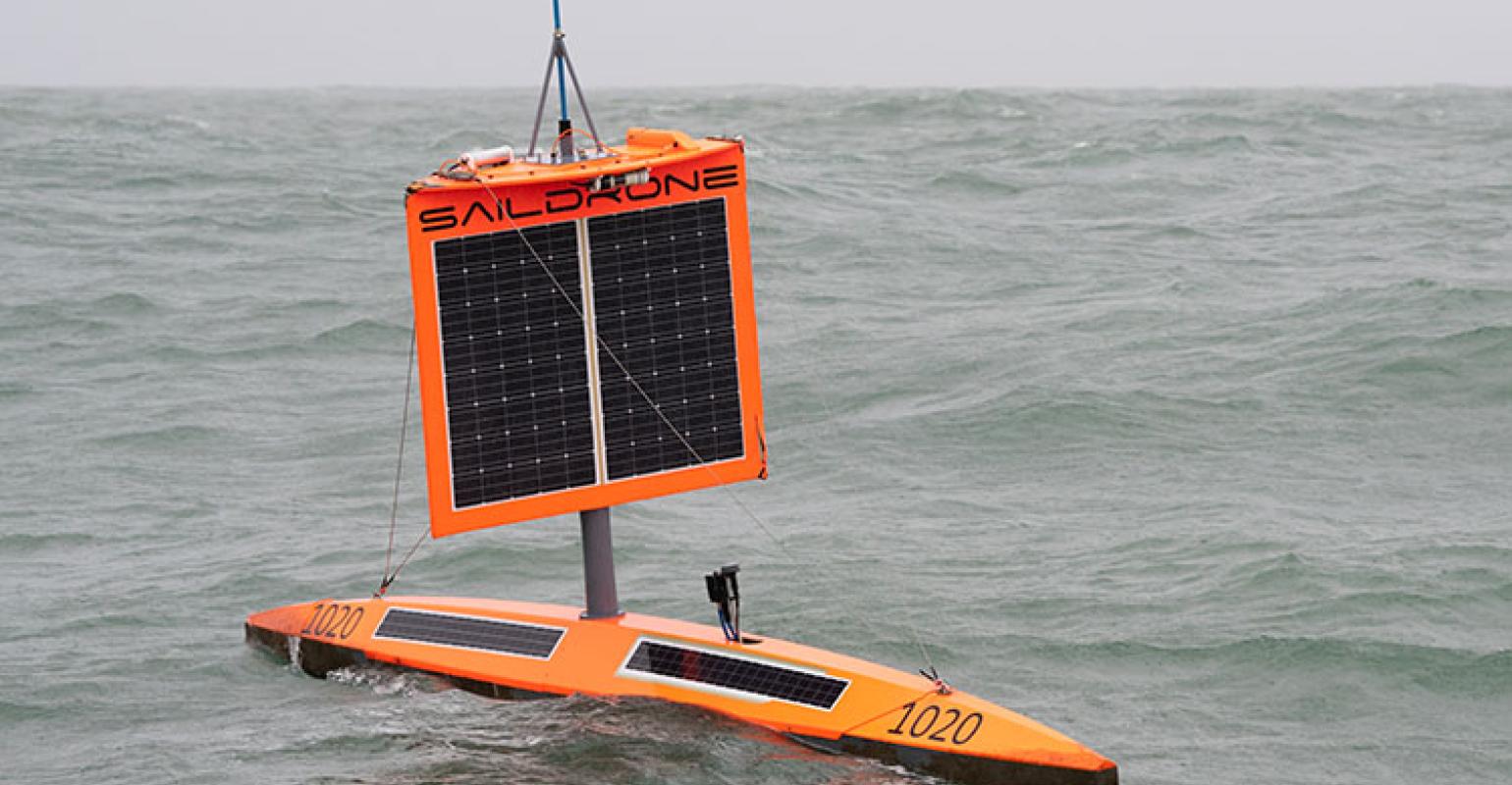 The Southern Ocean around Antarctica is a dangerous and foreboding place. Wind speeds can exceed 80 miles per hour and waves as high as a 5-story building are common, along with frequent icebergs. The dangers of the region mean that there isn’t any regular ship traffic, making it difficult to obtain accurate weather data. Yet, acquiring this data from the Southern Ocean is crucial to making scientific assessments of the Earth’s atmosphere, climate, and status of the oceans.

Filling in a Blind Spot

To meet the challenge, a consortium of researchers sponsored by the Li Ka Shing Foundation created a series of sailing drones capable of withstanding the extreme conditions in the seas around Antarctica. Science collaborators on the project include: the US National Oceanic and Atmospheric Administration (NOAA), the US National Aeronautics and Space Administration (NASA), Australia’s Commonwealth Scientific and Industrial Research Organization (CSIRO), the Palmer Long-Term Ecological Research (LTER), the Scripps Institution of Oceanography, the Southern Ocean Observing System (SOOS), the Japan Agency for Marine-Earth Science and Technology (JAMSTEC), the Korea Polar Research Institute (KOPRI), the Norwegian Polar Institute, the University of Exeter, the University of Gothenburg, the Department of Marine Science, University of Otago, and the New Zealand National Institute of Water and Atmospheric Research (NIWA).

The project was described in a news release form Saildrone. “One of our largest ‘blind spots’ in terms of our climate knowledge and its future prediction lies in the Southern Ocean. This is mostly due to the serious lack of observations, in particular in winter, in this remote and harsh environment. This leads to a poor understanding of how these polar oceans function,” said Sebastiaan Swart, co-chair of the Southern Ocean Observing System (SOOS).

Recently, a seven-meter (23-foot) long, wind-powered saildrone became the first unmanned system to circumnavigate Antarctica. The vehicle, known as SD 1020, was equipped with a suite of climate-grade sensors and collected data in the waters surrounding Antarctica, enabling new key insights into ocean and climate processes. “These exciting, high-resolution observations from Saildrone during its circumnavigation of the Antarctic provide valuable ground-based datasets for scientists to understand the Southern Ocean better and evaluate the models we use to predict weather and climate,” said Swart.

The Generation 5 saildrone includes a seven-meter (23-foot) hull, a 2.5-meter (8-foot) keel, and a five-meter (15-foot) tall solid wing. According to Saildrone, “This regular saildrone wing has an operational wind range up to 60 knots; however, the massive waves of the Southern Ocean were too much for this tall and slender wing.” The company reports that on two previous circumnavigation attempts, in 2015 and 2017, after a short period of time, the missions were compromised and the saildrones had to sail back for repairs. According to the news release, the team learned a huge amount from these failures and designed a new type of wing specifically for the Southern Ocean. The lower aspect “square rig” is much stronger and is designed to deal with the huge forces of being rolled and submerged by 15-meter (50-foot) breaking waves.

“While the square rig has less performance range than the regular saildrone wing and struggles to sail upwind, it does a great job of sailing downwind and can still get you where you need to go in the Southern Ocean,” said Saildrone founder and CEO Richard Jenkins. “You inevitably sacrifice maneuverability for survivability, but we have created something that gets the job done and that the Southern Ocean just can’t destroy!”

Less of a CO2 Sink Than Previously Thought

Carrying an instrument developed by NOAA to measure carbon fluxes very precisely, the saildrone provided important new data on the rates of carbon uptake in the Southern Ocean. “There’s a lot left to be learned about the ocean’s uptake of CO2 emissions, especially in the Southern Ocean. Up until a few years ago, the Southern Ocean was understood to be a large CO2 sink. Yet, that understanding was based primarily on observations made from ships that steer clear of the harshest weather in the Southern Ocean, leaving winter months undersampled,” said explained Dr. Adrienne Sutton, an oceanographer with the NOAA Pacific Marine Environmental Laboratory (PMEL) Carbon Group.

According to Sutton, with the deployment of carbon sensors on profiling floats, part of the Southern Ocean Carbon and Climate Observations and Modeling (SOCCOM) project, scientists started to get a broader seasonal distribution of observations, and they found less of a CO2 sink than previously thought.

“In terms of carbon and heat, the Southern Ocean is by far the most important ocean. Globally, the Southern Ocean takes up about half of all carbon and 75% of all heat that enters the ocean. This makes it disproportionately more important to place efforts and resources, such as those occurring by robotic platforms like Saildrone, into obtaining more scientific measurements in this polar region,” said Swart.

‍ Senior Editor Kevin Clemens has been writing about energy, automotive, and transportation topics for more than 30 years. He has masters degrees in Materials Engineering and Environmental Education and a doctorate degree in Mechanical Engineering, specializing in aerodynamics. He has set several world land speed records on electric motorcycles that he built in his workshop.