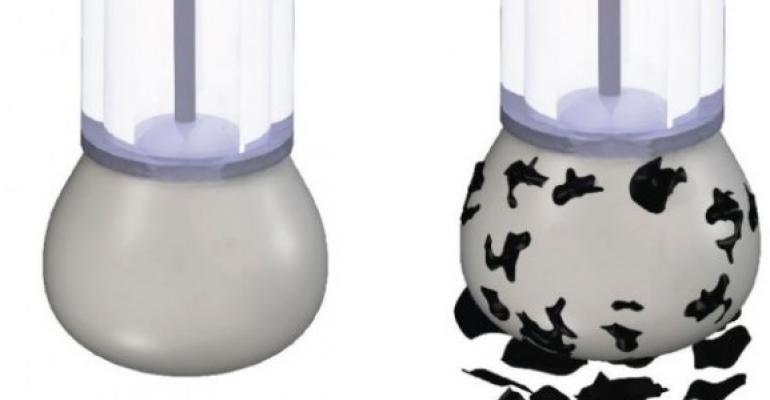 Using a liquid metal catalyst, greenhouse gas carbon dioxide can be removed from the atmosphere and changed into solid carbon that can be stored or used for other products.

Carbon capture and storage has fallen out of favor recently. It had been proposed as a way to remove the greenhouse gas carbon dioxide (CO2) created by the burning of fossil fuels. However, capturing the gaseous CO2, compressing it to a liquid form, and then transporting it and ultimately injecting it into sites underground has proven to be economically and environmentally unfeasible.

Now, researchers in Germany and Australia have devised a way to turn gaseous carbon dioxide directly into solid particles of carbon. Ordinarily, such a transformation would require extremely high temperatures, but the new process can operate at room temperature. “To date, CO2 has only been converted into a solid at extremely high temperatures, making it industrially unviable, noted RMIT University researcher Dr. Torben Daeneke in a news release.  “By using liquid metals as a catalyst, we’ve shown it’s possible to turn the gas back into carbon at room temperature, in a process that’s efficient and scalable,” noted Daeneke.

To convert CO2 to a solid, researchers worked with a type of liquid metal catalyst that was first proposed by researchers from the University of Erlangen-Nuremberg in Germany. The metal alloy is made from gallium, indium, and tin, is a liquid at room temperature, and conducts electricity. The metal is “doped” with cerium and a small amount of water. Carbon dioxide is bubbled into a container filled with an electrolyte liquid and a small amount of the liquid metal, which is then charged with an electrical current. The CO2 slowly reacts with the cerium in the presence of electricity and converts into solid flakes of carbon, which detach from the liquid metal surface. The process allows the continuous production of carbonaceous solid.

The solid carbon created could be used for other products, or could be stored underground without the potential for leakage that liquid CO2 under high pressure poses. “While we can’t literally turn back time, turning carbon dioxide back into coal and burying it back in the ground is a bit like rewinding the emissions clock,” commented Daeneke.

According to the International Energy Agency (IEA), 32.5 billion tonnes of CO2 were generated globally in 2017. Converting this much CO2, even if it were possible, would result in mountains of solid carbon. But finding uses for the pure carbon particles, such as electrodes for batteries or supercapacitors could help make the process financially viable, while also removing carbon dioxide from the atmosphere. “While more research needs to be done, it’s a crucial first step to delivering solid storage of carbon,” said Daeneke.