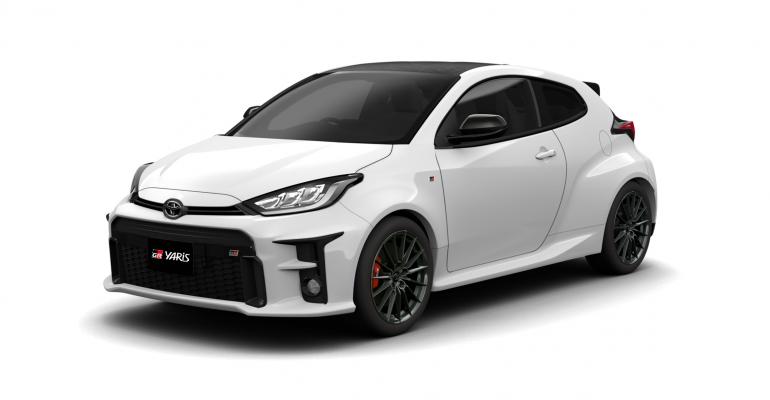 In Japanese tuner-car slang, “gazoo” refers to the speed shops where car enthusiasts toil to wring extra speed from their machines. Toyota president Akio Toyoda is such an enthusiast himself, and his desire is to infuse some of that gazoo grease-under-the-nails ethos to his whole company.

That is why Toyota launched Gazoo Racing a few years ago and subsequently began badging sports cars with the brand. But the provenance of those sports cars bothered Toyoda, as the Toyota 86 relies on Subaru for most of its design and hardware and the new Supra is largely a BMW product that is contract manufacturered by Magna in Graz, Austria.

“I have always wanted a sports car purely made by Toyota,” Toyoda explained in remarks posted on the company’s YouTube channel. To do that, the company has developed the stunning Gazoo Racing Yaris. The Yaris, you’ll recall, is Toyota’s subcompact hatchback city car, which might seem a surprising foundation for a sports car. But the GR Yaris is a Yaris in name only. It is actually a purpose-designed and built all-wheel drive machine optimized for rally racing.

New, more restrictive rules for the 2021 World Rally Championship require that race cars conform more closely to their production counterparts to be eligible. Toyota’s response is to prepare a homologation special that will give Toyota’s racing team the most competitive foundation possible. 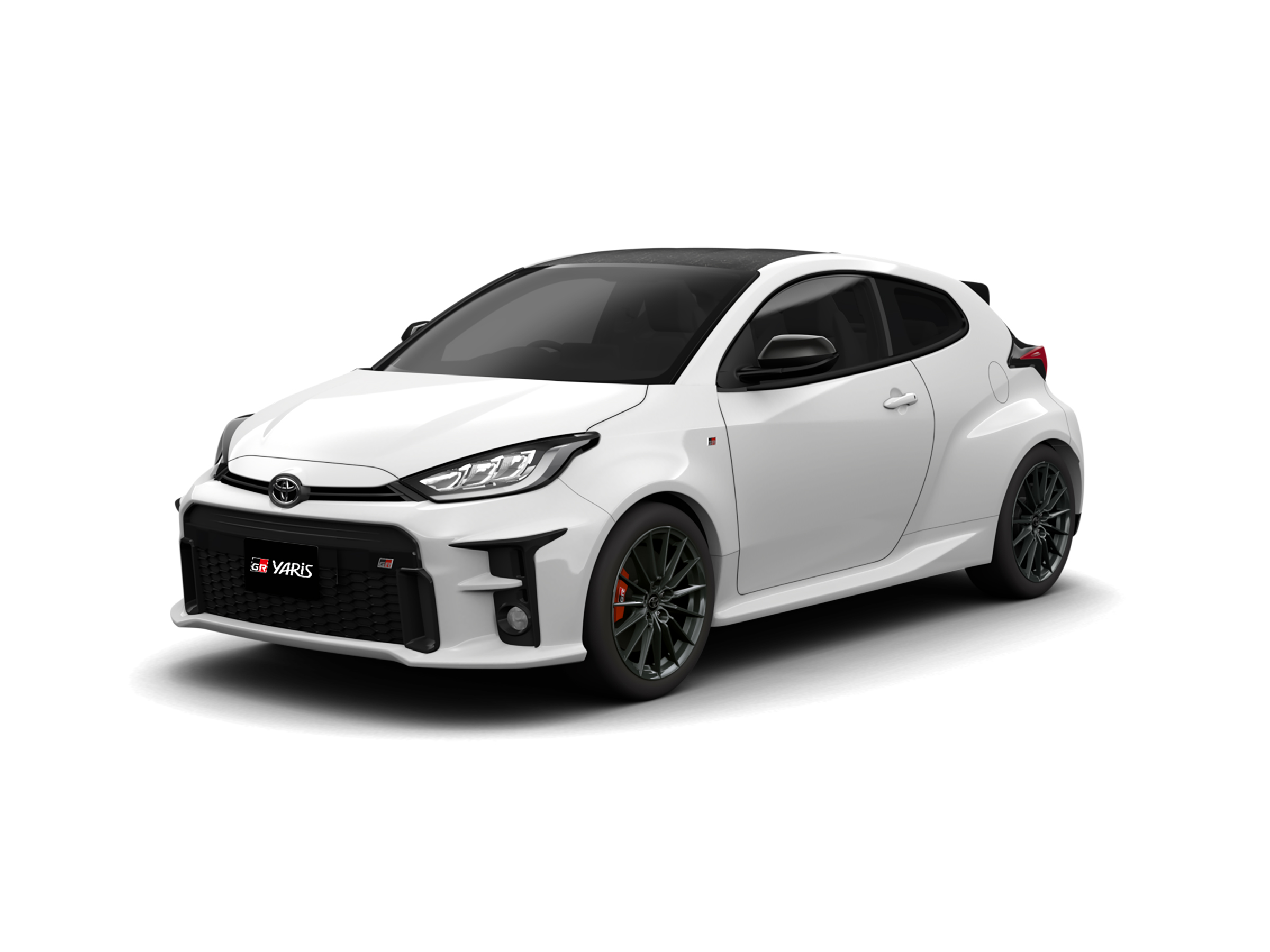 As a benefit, customers in global markets where the WRC is popular will be able to buy street-legal versions of this race car. The minimum sales requirement for racing eligibility is 25,000 cars over a three-year span. The U.S. market has not been announced as a destination for the subcompact GR Yaris, but rumors hint at some of its technology appearing in a U.S.-spec compact Corolla.

The GR Yaris boasts three critical factors that point toward the car being fun to drive for buyers and potentially competitive in rally racing: A lightweight, aerodynamic and rigid body shell, a compact and technically advanced direct-injected, turbocharged 1.6-liter inline 3-cylinder engine, and a newly-developed all-wheel drive system that provides accessible performance to drivers.

“It was felt that whilst we are excited about the roadgoing Yaris, it wasn’t the shape and size to provide a championship-winning platform for WRC,” explained senior Toyota PR manager, James Clark. 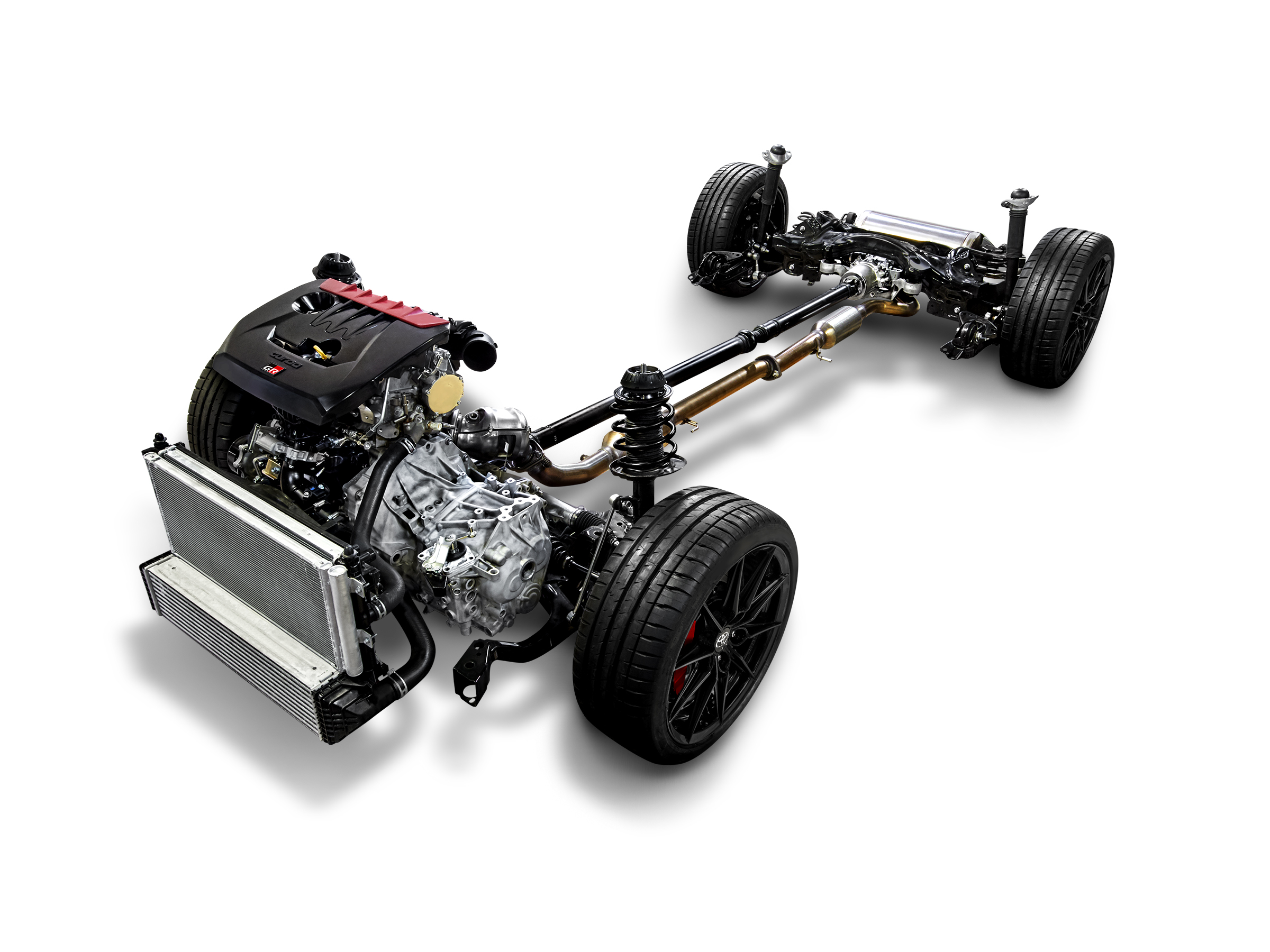 The GR Yaris bodyshell is a visible departure from the design of the regular Yaris. It is a two-door hatchback with a low, swooping roofline that tapers at the rear of the car to minimize aerodynamic drag at racing speeds. At the same time, the body is as wide as that of a car a class larger, providing ample space for fat, sticky racing tires and long-travel suspension to absorb the bumps and jumps that are characteristic of most rally routes.

The body is formed from a mostly steel shell that has a lightweight SMC carbon fiber roof panel grafted on and all of the closure panels such as the doors, hood and hatch are all aluminum. “One of the joys of making a bespoke body is you can go to town on it,” observed Clark.  “Use of the right materials to save weight while maintaining strength, even though it adds cost, it saves weight and adds structural rigidity and performance. The structure is vastly stiffer than it would have been,” in the all-steel, conventional Yaris economy car.

Front suspension on this solid foundation is typical MacPherson strut design, while the rear employs a double wishbone layout. As a well-balanced all-wheel drive machine, the GR Yaris wears 225/40ZR18 tires on BBS forged aluminum wheels at all four corners. Braking hardware is provided by Brembo, with four-piston front calipers and two-piston rears. 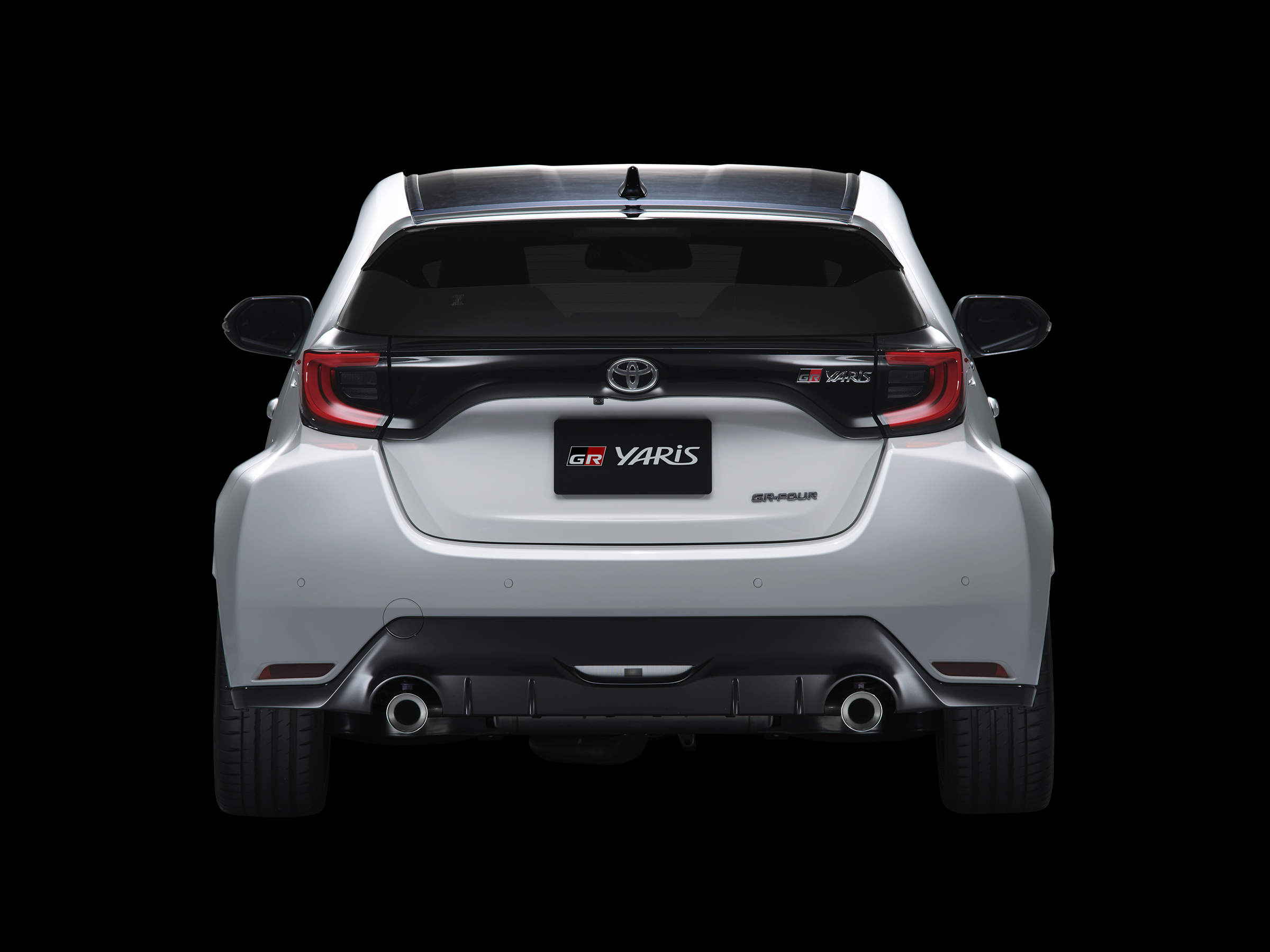 Powering this lighter, stronger, slipperier skeleton is a seemingly curious choice of engines: A turbocharged, direct-injected 1.6-liter three-cylinder. But a three-cylinder engine provides the ideal combination of size, mass and power for the rally driving application, according to Clark.

“Light weight was massively important to the chief engineer,” he explained. “So when you find areas where you can save weight, you have to take them.” While size and mass were priorities, the race version will be trying to beat competitors, so the engine has to make good power too.

In production trim, the G16E-GTS triple in street-legal GR Yarises will be rated at 268 horsepower and 273 lb. ft. of torque. The engine passes that power to a conventional 6-speed manual gearbox with an H-pattern shifter and clutch pedal. This will surely thrill purists who love the old-style do-it-yourself transmissions, but it contrasts with the usual rally configuration of a sequential manual transmission with a fore-and-aft sequential shifter. 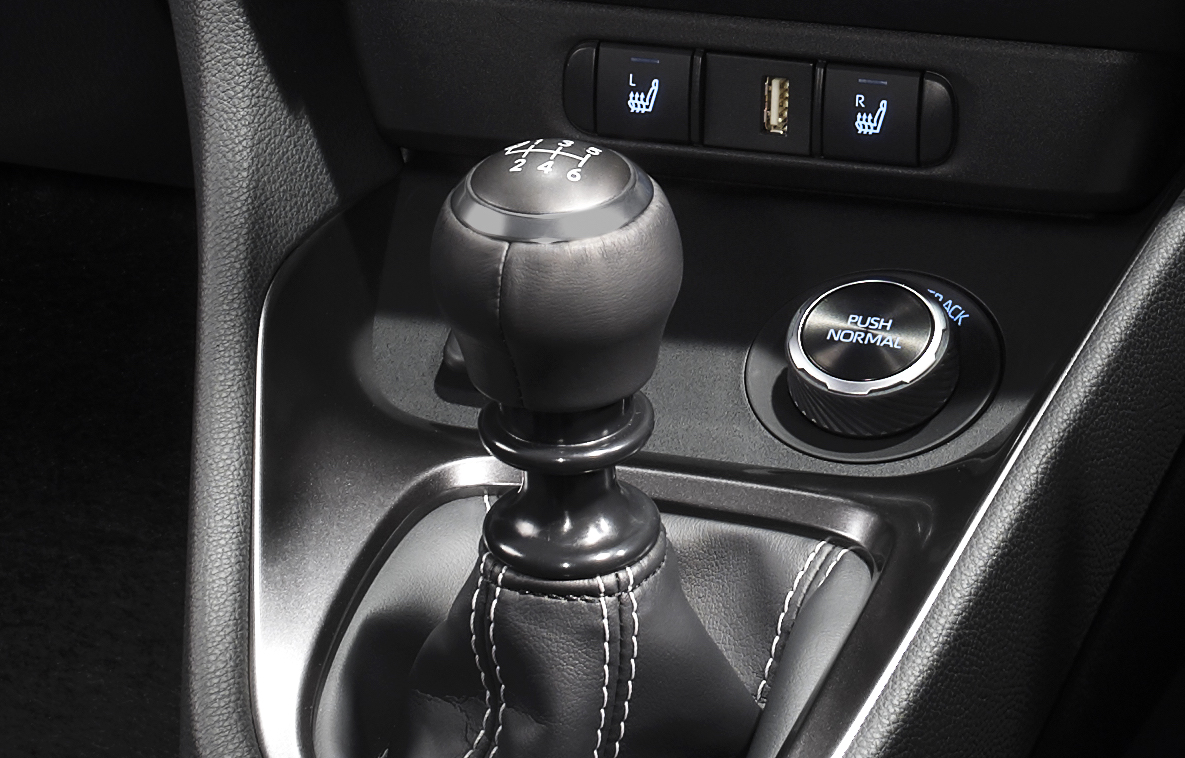 It sends power to a center computer-controlled multi-plate center clutch that splits power between the front and rear wheels. While it technically could send as much as 100 percent of the torque to either axle, Toyota has programmed the computer to permit the driver three choices: 30/70 percent front/rear torque split, 50/50 and 60/40. Depending on the conditions these simplified options will give drivers the best results, according to Clark.

At each end of the car power is split between the left and right wheels by torque-sensing differentials. Combined with the settings of the center differential, this hardware works magic, swears Clark. “I’ve driven it in all three modes,” he reported. “It makes me look like (legendary rally driver) Tomi Makinen!” 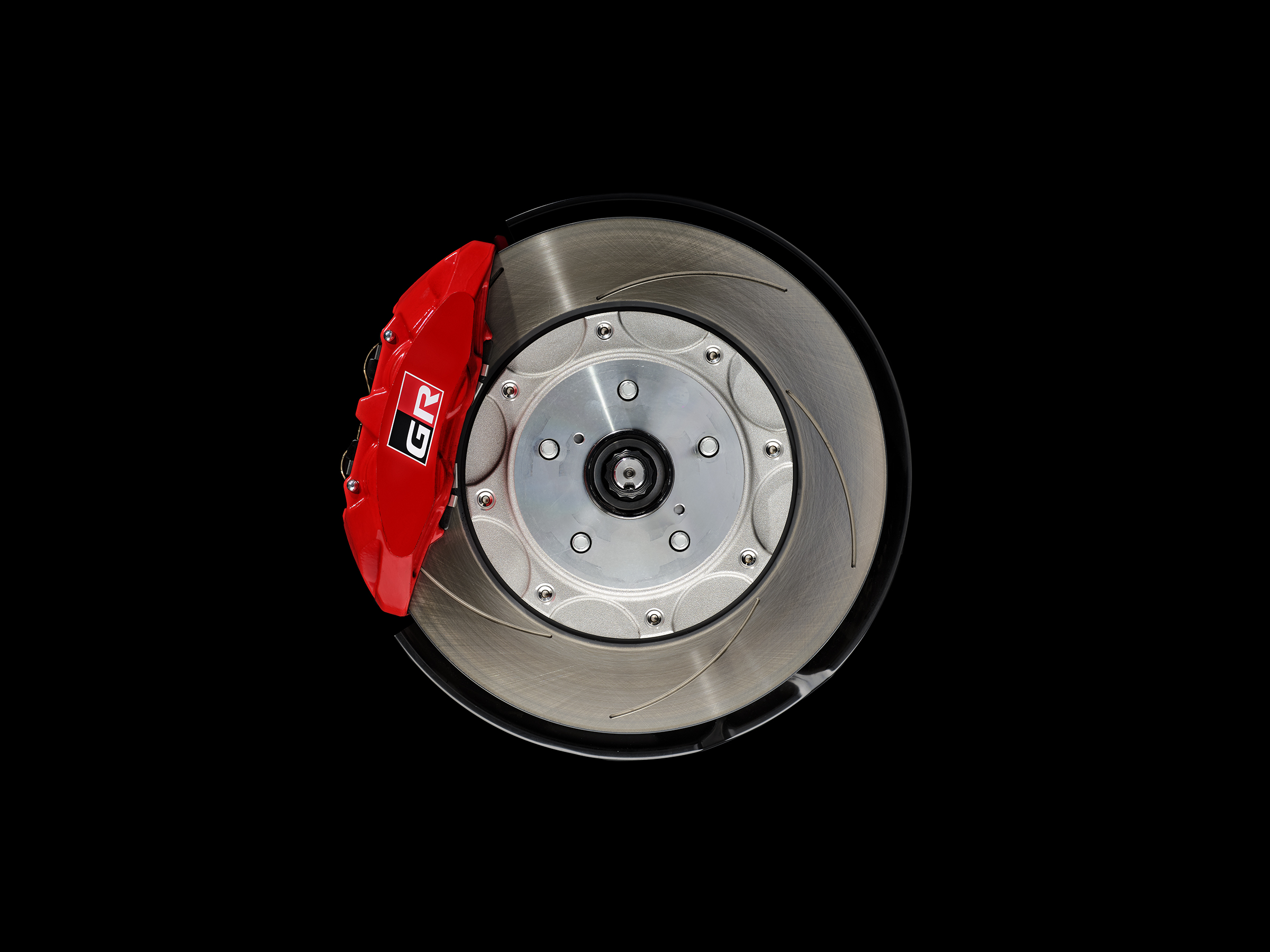 Current Gazoo Racing WRC driver Jari-Matti Latvala also vouches for the result in the production version of the car he will race starting in 2021. “This car is built so that you can drive it everywhere: on snow, on ice, on tarmac, on gravel,” he said in a promotional video. “This is the specialty of this car. It is made for all the conditions, four-by-four.”

The opportunity for WRC fans in global markets to pretend to be Latvala while driving the GR Yaris will surely fuel sales of all 25,000 required units. Fingers crossed we eventually get some of them in the U.S.