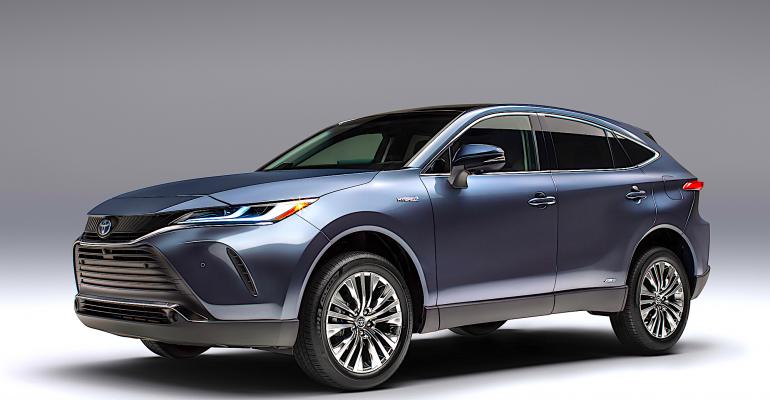 Both new models are all hybrid-electric for maximum fuel efficiency.

A day after Toyota Racing Development’s NASCAR Camrys returned to action in the Real Heroes 400 stock car race at Darlington Raceway, Toyota was the first carmaker to break from the COVID-19-induced hiatus on new car introductions when it streamed its “Spring Showcase” to unveil new 2021 Venza crossover SUV and Sienna family van models to help kickstart a return to business, if not business as usual.

These  two vehicles represent comebacks of a sort too, just as the industry is coming back from its #WorkFromHome shutdown, as the Venza has been on hiatus since the original version of Toyota’s mid-size two-row crossover was discontinued after the 2015 model year and the Sienna van has been an uncompetitive zombie model, stumbling along more than a decade after its 2009 debut as a 2010 model.

Both vehicles are built on the Toyota Hybrid System II hybrid-electric powertrain system with a lithium-ion battery pack that we already know from the Camry Hybrid for optimum efficiency on all versions. Additionally, all Venzas feature Toyota’s Electronic On-Demand All-Wheel Drive system that debuted in the all-wheel drive 2019 Prius.

All-wheel drive is not standard on all Siennas, but it is an available option on every trim level, so customers don’t have to splurge on a pricy equipment package to get all-wheel drive security. The electric on-demand system drives the rear wheels with electric motors whenever there is the risk of the front wheels spinning, such as when starting while facing uphill in the rain or snow. In those conditions, the system can deliver 80 percent of available torque to the rear wheels. In regular driving conditions, all power flows through the front wheels.

Toyota predicts that the Venza will score 41 mpg on the EPA’s city fuel economy test, 38 on the highway and 40 mpg combined, which is impressive for a two-row, mid-size crossover utility vehicle. The Venza is slated to reach U.S. dealers this summer, while the Sienna won’t arrive until late this year, so its fuel economy calibration may not be as far along as the Venza’s. Toyota didn’t give estimates for the EPA city or highway numbers for the Sienna, but did say that they expect it to hit 33 mpg in combined driving on the test.

The Pre-Collision System offers automatic braking capability should the driver not react in time in an emergency situation. Blind Spot Monitor (BSM) with Rear Cross Traffic Alert (RCTA) is standard on all grades, while XLE and Limited add Front and Rear Parking Assist with Automated Braking (PA w/AB).

The Venza’s hybrid drivetrain uses the same Atkinson-cycle 2.5-liter four-cylinder combustion engine as the current Camry hybrid. With the extra oomph of rear-wheel electric drive, total system peak power is 219 horsepower. As with other Toyota hybrids, the transmission is a continuously variable design that integrates the electric motor that drives the front wheels and provides automatic stop/start function for the combustion engine.

Venza’s signature feature is surely its cool Star Gaze panoramic sunroof that switches between clear and frosted glass. “Star Gaze uses electrochromatic glass technology that can switch instantly between transparent and frosted with just the touch of a button,” explained group vice president and general manager of the Toyota Division at Toyota Motor North America, Jack Hollis, who spoke from his home during the digital presentation. “When frosted, the Star Gaze brightens the interior giving it an even more open and inviting feel,” he continued. “And when transparent, the glass still cuts nearly 100 percent of UV light.”

The Sienna’s hybrid powertrain is similar to that of the Venza, but its total system power is 243 horsepower, which contributes to the Sienna’s towing capacity of 3,500 lbs.

The Sienna does not have Venza’s Star Gaze sunroof, but it does have its own cool technology. Like its Chrysler and Honda rivals, the Sienna now has an integrated vacuum cleaning system. And to one-up them, it also has a refrigerator to keep food and drinks fresh for those back-seaters who get to roll around in the kind of luxury once reserved for movie stars riding the back of their Roll-Royces.

Toyota Motor North America executive vice president of sale Bob Carter excitedly pointed to something that even Rolls doesn’t have: kick-to-open sliding doors for the Sienna. No, you don’t kick the doors! They work like the power-opening hatch doors that have been available on a number of vehicles in recent years, so a kicking motion beneath the door opening will cause it to open if you’re carrying the car’s key fob.

He also touted the Sienna’s styling during the introduction, trying to help escape the proletarian stigma that kills family van sales. “Influenced by the bold character of SUVs, it delivers on design without compromising the convenience and utility of a van,” he declared. Toyota provided photos of the Sienna shot exclusively with SUV-worthy western backdrops to further underscore this effort.

Vans are the most efficient people movers available and are unmatched for their family-hauling amenities, but such previous attempts to convince consumers that sliding-door vans are the same thing as their hinged-door crossover SUV siblings have failed.

Regardless of the spin applied, both the Venza and Sienna mark progress over their predecessor models, so we’ll look forward to getting the post-lockdown opportunity to try them both. Slipping out of the lockdown didn’t work out ideally for Toyota’s NASCAR drivers, as driver Denny Hamlin was Toyota’s top finisher, in 5th place in Sunday’s race at Darlington.

But the new post-shutdown schedule includes mid-week races, and Toyota will get another crack at a win Wednesday in the Toyota 500, also at Darlington. Just as with the Sienna and Venza, Toyota keeps working to improve its NASCAR results too!